Take a sneak peek at the Museum of Indian Arts and Culture's all-new "Here, Now and Always" exhibition 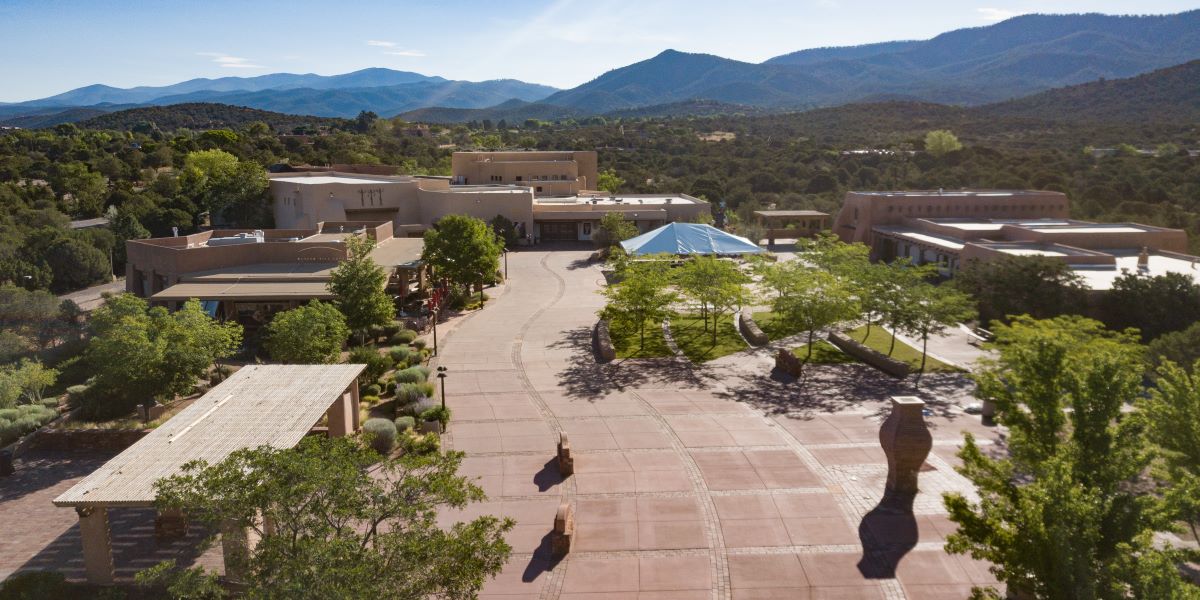 When the Museum of Indian Arts and Culture in Santa Fe opened “Here, Now and Always” in 1997, the exhibition transformed the field. It was the first exhibition in the Southwest to work collaboratively with Indigenous people. It modeled a new way to interpret the lives and culture of Native peoples and set a new standard for Native representation in museums. The methodology would be copied by the Smithsonian’s National Museum of the American Indian and countless others around the nation.

When MIAC’s completely renovated “Here, Now and Always” debuts on June 2, it will again establish a new standard of institutional collaboration with Native voices and presentation of Native culture.

I took a behind the scenes tour of the exhibition space in April with MIAC curatorial assistant Lillia McEnaney as it was being installed.

Off public view since January of 2020, the reimagined “Here, Now and Always” will feature more than 600 items from the museum’s extraordinary collection of ceramics, basketry, jewelry, paintings, textiles, fashion and more. All these items—and the stories within them—are reflective of the knowledge, narrative and cultural practices of Native peoples in the Southwest. While the museum is situated on Pueblo homeland, “Here, Now and Always” highlights diverse perspectives from not only the 19 New Mexico pueblos, but the Apache, the Ysleta del Sur Pueblo in El Paso, Texas, the Hopi Tribe in Arizona, and the Navajo/Diné, Paiute, and O’odham communities as well, providing an expansive overview of the region’s Indigenous peoples, cultures and history.

Guided by a deeply collaborative process which relied upon the expertise of more than 30 Indigenous collaborators–artists, scholars and community members across the region–and more than a dozen co-curators, the exhibition foregrounds the voices, perspectives and narratives of Native people, moving authority away from the museum and non-Native academics.

“Museums have largely been forces of colonial control and oppression and ‘Here, Now and Always’ really shifted that landscape,” McEnaney explained. “When it opened, people noticed; it shifted the field of museum anthropology and the way people thought about how museums should operate, not just Native museums, but museums as a whole. It should always be in collaboration and in partnership with those whose items we steward and those are the voices who should be privileged. That was radical at that time.” 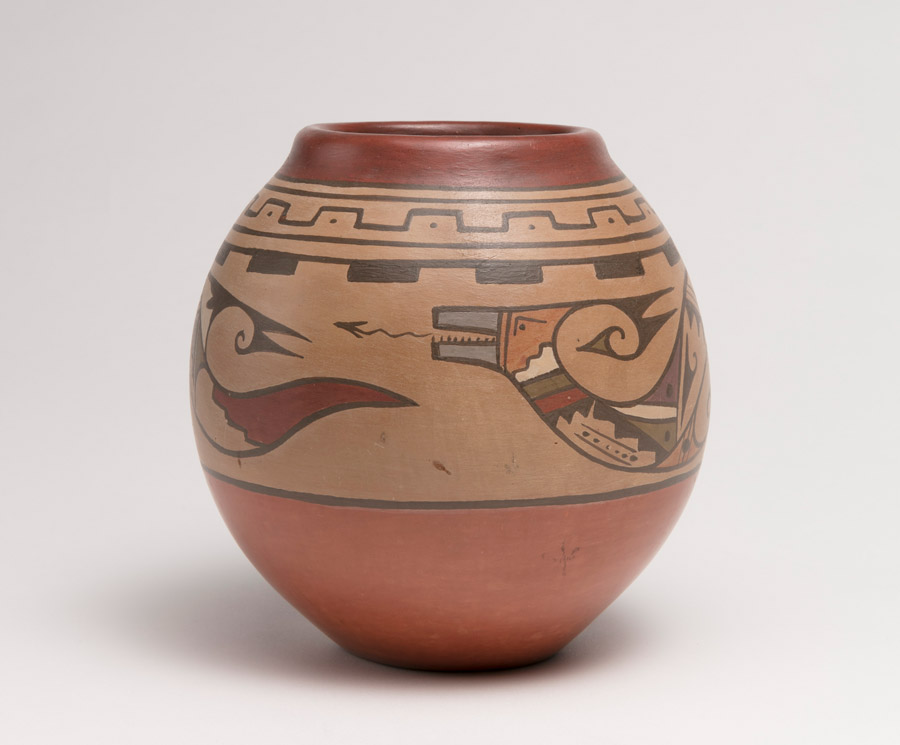 The exhibition opens with a welcoming film from Charine Gonzales, a descendant of legendary San Ildefonso Pueblo potter Maria Martinez. Guests then enter through what is called the “Emergence Tunnel.” The original exhibition featured a similar architectural element, encouraging visitors to shelve their perspectives to become immersed in the experience they're about to undertake.

The “Emergence Tunnel” echoes Pueblo emergence stories; Pueblo Indians believe they came up from the underworld. Lighting in the tunnel will be dim, ceramic figures on view, the sound of water will be heard.

Highlighting the space will be a large bronze sculpture from Roxanne Swentzell (Santa Clara Pueblo).

A major change from the initial “Here, Now and Always” is the exhibition’s layout. Previously maze-like and slightly claustrophobic, the updated presentation offers passage on a hub and spoke system allowing visitors to choose how they move through the space. The circular motive is also symbolic.

“We're hoping that visitors will think about time and one's lifespan as more cyclical in nature rather than thinking about this very colonial, linear time, and you'll see that reflected in the architecture of the exhibition,” McEnaney said. “We tried to avoid hard edges and to shift the way people think about time and space.”

The exhibition is divided into multiple sections each presenting a different aspect of Indigenous life. The “Ancestors” area has been little changed, “Survival and Resilience” is totally new. The latter display taking a much more outwardly political stance than anything the exhibition’s previous incarnation attempted.

New here are explorations of the Pueblo Revolt of 1680 from printmaker and ceramicist Jason Garcia (Santa Clara Pueblo) through his “Tewa Tales of Suspense” series. The Diné and Apache imprisonment at Bosque Redondo receives attention from three baskets created by Sally Black (Diné), each telling a different part of that story.

Also new to the presentation are discussions of climate change and water rights.

“The (exhibition) collaborators we were working with this time around felt more comfortable sharing those narratives than they did in the 90s,” McEnaney said. “All of this is based on conversation and listening and mutual understanding. It's not like myself or one of the other staff people decided that it was time to tell that story. It really came from the community saying we want to tell this story, in this particular way, with these particular objects.”

Struggle and abuse, however, never dominate “Here, Now and Always.”

“The collaborators wanted to talk about things like Bosque Redondo and the Pueblo Revolt, but they didn't want it to be the entire story,” according to McEnaney. “The real story is the resilience and the ingenuity that happened in response to the incredible trauma that the United States government put on Native folks, and the Spanish and Mexican government as well.” 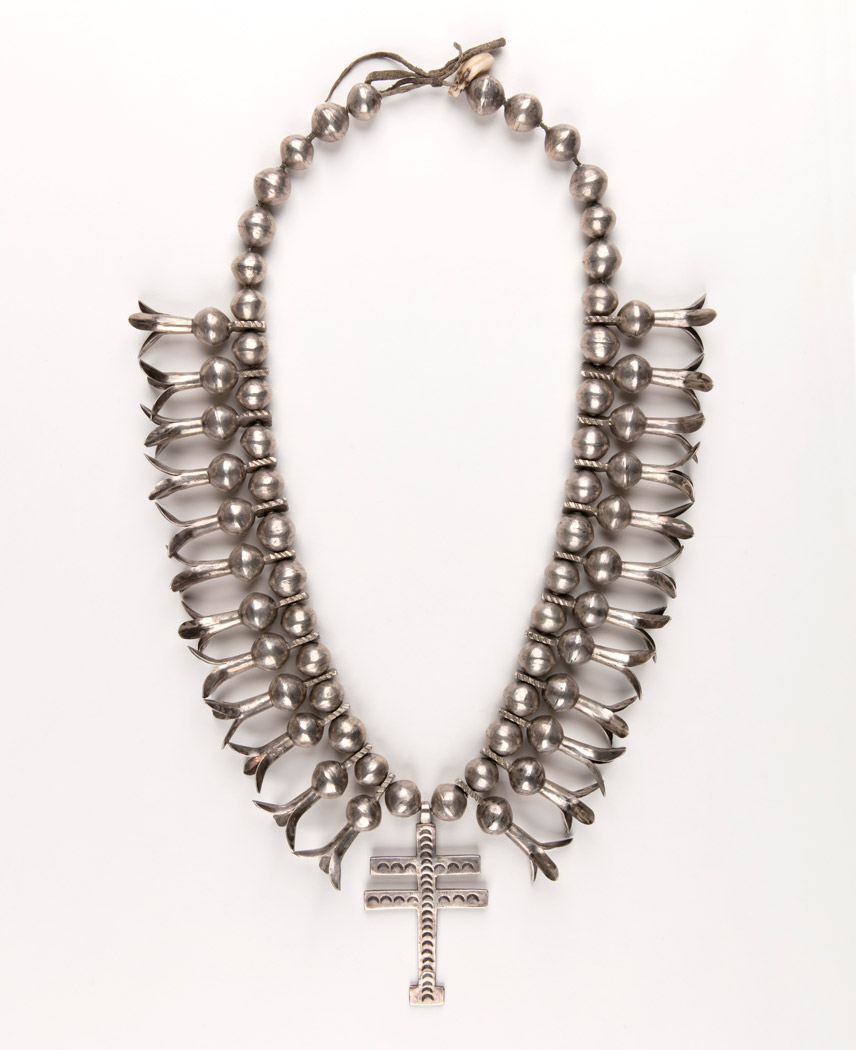 Reinforcing this point will be the display of now-Secretary of the Interior Deb Haaland’s (Pueblo of Laguna) inaugural outfit when she was previously sworn in as a congresswoman for New Mexico.

Another major evolution comes in the area devoted to Indigenous art where fashion takes center stage. Native American fashion design has experienced an explosion in prominence over the past few years and this trend is reflected in “Here, Now and Always” with a display modeled after a runway.

Designer Loren Aragon (Acama Pueblo) was invited by MIAC to explore its pottery collection and select an item for inspiration. He chose an Acoma or Laguna jar from 1910–specific attribution being difficult as the pottery being produced by the two Pueblos at the time was very similar.

The collaboration with Aragon and the resulting dress are one of McEnaney’s favorite aspects of the overhauled exhibition.

“Museums are historically such places of violence and colonial control and just being able to do that type of work–why do museums exist if we do not do projects like that–I think it demonstrates the way museums are moving, and the (New Mexico) Department of Cultural Affairs is moving, and we all should be changing our thinking (about) why museums exist, and who they cater to, and who has access, and whose stories are told and why?” she said.

Another dress, one designed by Patricia Michaels (Taos Pueblo) who starred on the TV show “Project Runway,” will be on display alongside a Maria Martinez plate with feather design which inspired it.

With never-before seen items, state of the art technology and next generation perspectives, “Here, Now and Always” illustrates the ways in which the past informs the future, and further positions MIAC as a world-renowned resource for understanding Native lives, arts and cultures today. 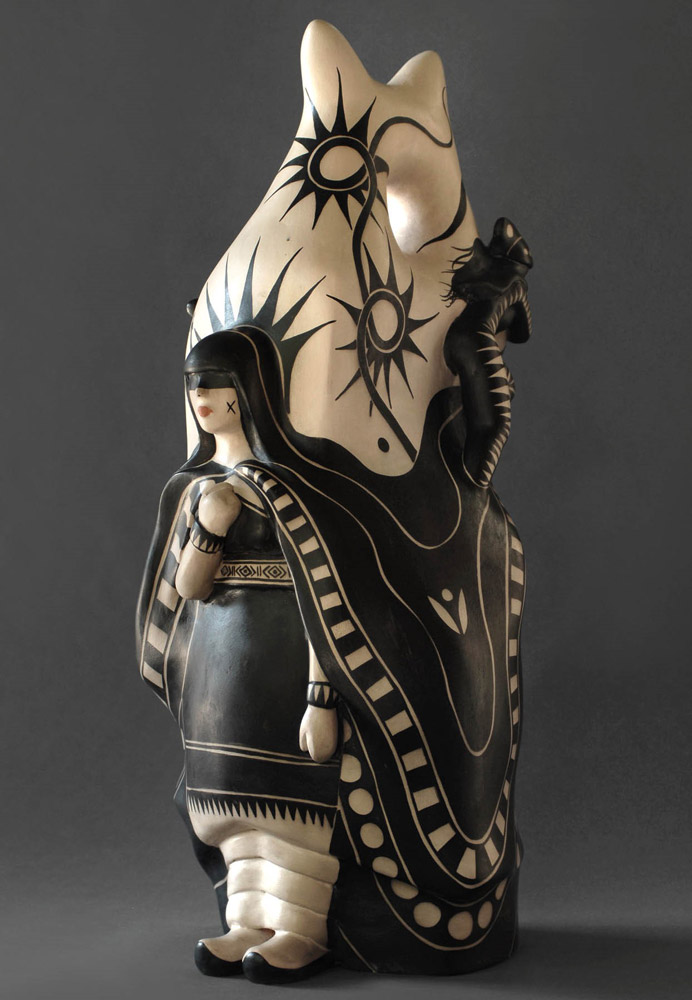