'A Place of Suffering... A Place of Survival;' new exhibition open at Bosque Redondo Memorial 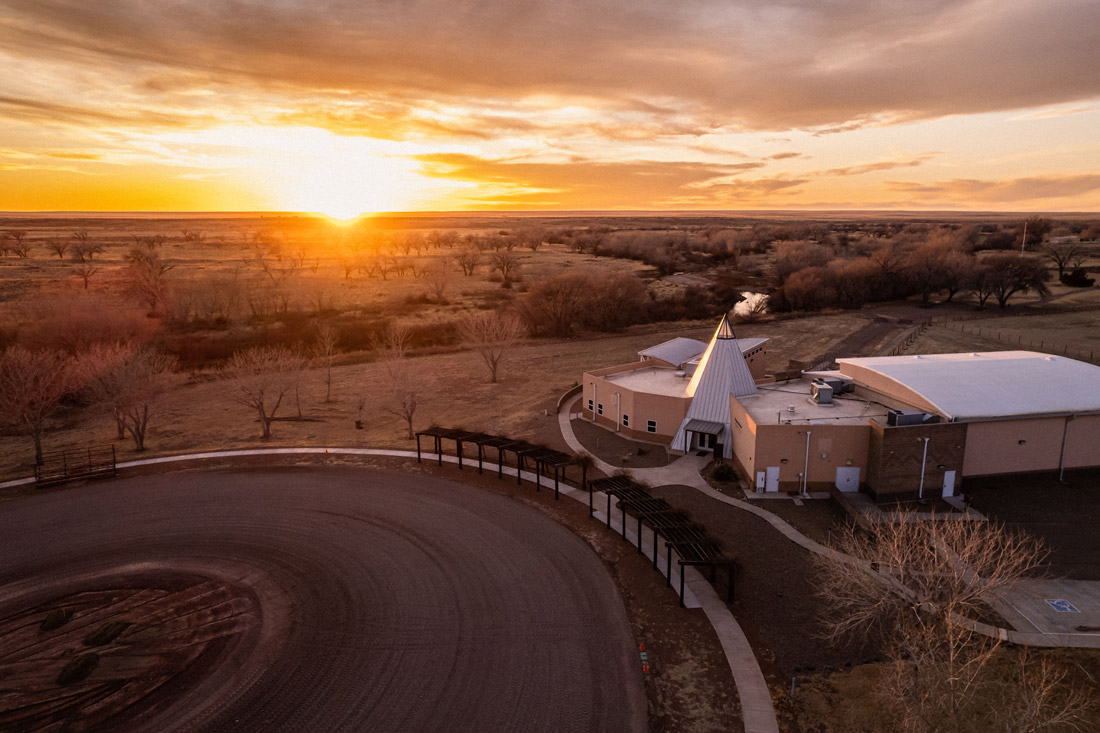 The Bosque Redondo Memorial at Fort Sumner Historic Site makes an odd place for a celebration. On this land, between 1863 and 1868, U.S. government soldiers forced the relocation of nearly 10,000 Diné (Navajo) and roughly 500 Ndé (Mescalero Apache) peoples from their homelands in present-day Arizona to this isolated, inhospitable expanse in eastern New Mexico. The fort served as the center of a million-acre parcel known as the Bosque Redondo Indian Reservation.

The Long Walk, as the Diné call it, saw their ancestors travel more than 350 miles on foot. Hundreds either died along the way or were abducted by slave traders. Conditions throughout the desert march varied from brutally cold to scorching hot. Food, water, clothing and medical supplies were scarce.

Humanity from their captors proved scarcer.

Stragglers were shot. Pregnant women who couldn’t keep up with the group were killed. Torture was routine on the walk to imprisonment.

Bosque Redondo is no place for celebration.

But celebration is called for after what has finally been accomplished there. On May 28, 2022, the grand opening commemoration for a recently completed permanent interpretive exhibition, “Bosque Redondo: A Place of Suffering…A Place of Survival,” takes place. At long last, the storytelling of what took place there centers on the perspectives of the people who experienced it.

“It was originally called Fort Sumner State Monument and it was opened to the public in 1971. The very first exhibition that went into the monument was, ‘Fort Sumner an American Concentration Camp,” and it was not met well from the public. The visiting public said, ‘we don't want to hear about that,’ and within a matter of months, that exhibition was pushed out the door,” Aaron J. Roth, Historic Site Manager at the Memorial and Fort said. “The very next exhibition that went in was, ‘The Soldiers, the Indians and Billy.’”

That presentation debuted in 1986 and was the longest running exhibition on site. It prioritized soldier life. Staff dressed up like soldiers. The reservation was scantly mentioned and the hardships endured by the Indigenous people forced there mostly overlooked.

“This was a military outpost, the soldiers were here to take care of the ‘Indians,’ and that was about it – and then it was talking about Billy the Kid,” Roth said of the exhibition’s focus.

Nearby is where the famed gunfighter participated in the Lincoln County War.

Returning the site’s focus to one highlighting the Indigenous experience would require a shove in that direction from a group of kids.

“In 1990, this letter was left at the site prayer shrine that was started by a group of medicine men in 1971,” Roth said. “This group of students from Navajo Nation had just (returned) from this huge youth gathering in Oklahoma – really charged up, really empowered at the time. They came here seeking information and were not impressed. They demanded that the truth be told. They said, ‘we find this place offensive; not telling of a true history of what happened to our people. Where's our history?’”

The letter was picked up by a ranger who kept it and asked, “What do we do now?”

The kids who wrote the letter are approaching 50-years-old.

“This project (‘A Place of Suffering… A Place of Survival’) has been 30 years in the making,” Roth said.

The 1990 letter sparked an initiative to establish a memorial recognizing the reservation era history. A conversation began, but nobody really knew what to do.

In 2005, the memorial was finally opened to the public without an exhibition in the space. Acknowledgement. No storytelling or interpretation.

The first attempt at an exhibition submitted in 2014 was a failure.

“The final exhibition plan that we ended up with, while it would look nice, it wasn't well done,” Roth remembers. “There were dioramas that we're supposed to represent tribal communities – these life size dioramas – but it gave people the impression that these people are dead and no longer in existence. They don't practice any of this anymore. It put people in a time capsule. It also used animatronic figurines that were supposed to represent tribal leaders which was very offensive.”

Roth started working at the site that same year.

In 2015, with funding from the state for an exhibition about to be lost, a decision was made to start planning a new exhibition from scratch. In 2016, a committee featuring representatives from the state government as well those chosen by tribal governments was convened.

“Learning to have a conversation,” according to Roth.

It wasn’t until 2017 that discussions about the exhibition which became “A Place of Suffering… A Place of Survival” even begin.

The Indigenous collaborators assured the project hit its mark. As one example, during the planning stage to develop a welcome area to the exhibition, designers initially proposed a preparatory cleansing space at the entrance to the galleries for smudging.

“There was going to be this kind of glass fume hood area and our Indigenous partners said, ‘this is well intentioned, but it's not necessarily a good idea because in a place of prayer, or a place where you're trying to cleanse, it's a private thing and everybody has a different practice, so while it's well intentioned, it's not necessarily the best idea for the space,’” Roth remembers. “We scrapped it. Ultimately, we ended up finding a better space for that kind of preparation, something that was outside and better suited for the space.”

This exhibition has not only been informed by Indigenous perspectives, it is told through those perspectives.

“We were able to bring in voices from the communities that were affected by this history; we were now able to bring in oral history, not just what was written down as oral history, but things that were now being told in Navajo and Mescalero,” Roth said. “There's a room halfway through the galleries that (visitors) walk into and hear about 15 minutes of oral history, spoken in either Diné or Ndé. You can sit there and you can hear it if you're coming from one of these communities, but you can also hear it translated to English.”

The exhibition is trilingual throughout.

Quotes from primarily Diné and Ndé community members are prominently displayed on the exhibition’s walls detailing what emotional connection guests should be feeling in each space throughout the presentation.

“If we're talking about when people were supposed to be civilized and Christianized, what did that mean? The taking and the stripping of culture and cultural genocide. That's when you hear a story from the people about what that meant,” Roth explains. “It's definitely more representative of what was done to the people.”

The Bosque Redondo Memorial at Fort Sumner Historic Site and “A Place of Suffering… A Place of Survival” are open Thursday through Sunday, 10 a.m. to 4 p.m. The fee is $7 for adults; children under the age of 16 are free. New Mexico residents with identification are admitted free the first Sunday of every month.