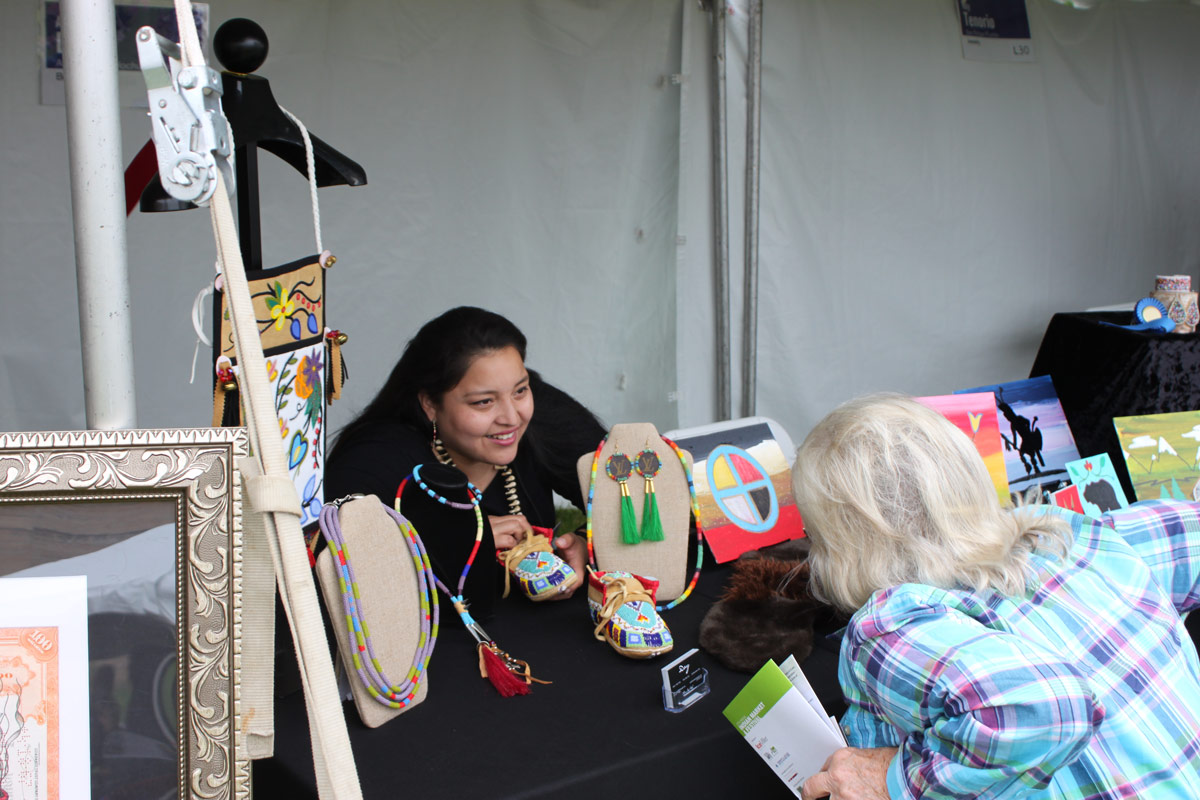 Indian Market and Festival artist Alexa Rae Day, Anishinaabe Hochunk Lakota, shows her work to a market visitor in 2019 | Courtesy of the Artist

The Eiteljorg Museum of American Indians and Western Art in Indianapolis celebrates a pair of milestones this month. On June 25 and 26, the 30th annual Eiteljorg Indian Market and Festival takes place, returning as an in-person event for the first time since 2019. Simultaneously, the museum debuts newly redesigned Native American Galleries following a $6 million overhaul six years in the making.

The combination of events has no peer across the Midwest this summer for appreciating Indigenous arts and culture up close.

Since its inception in 1993, the annual Eiteljorg Museum Indian Market and Festival has grown in stature to become one of the top Native American art markets in the country. More than 140 Native artists representing over 60 Indigenous cultures from across the United States and Canada will be on hand selling jewelry, pottery, paintings, beadwork, weavings, carvings and more.

“The motivating idea behind Indian Market and Festival has been to support Native artists and provide them an opportunity to sell their fine art and pursue their livelihoods, while also building support for Native arts in Indianapolis and the Midwest and cultivating loyal art collectors locally and regionally,” Bryan Corbin, Public Relations Manager at the Eiteljorg Museum of American Indians and Western Art, said.

While opportunities to meet and engage with Native American artists may be commonplace in the Southwest, or maybe Oklahoma or the Mountain West for those seeking such experiences, in the Midwest, in Indianapolis – smack dab in the middle of corn country – it’s a rarity. Eiteljorg Indian Market and Festival represents a worthy pilgrimage for Indigenous art devotees from Chicago, Detroit, Ohio, St. Louis and all points in between, and a lot closer than Santa Fe.

Artists partake in a juried selection and must be members of a federally or state-recognized tribe to participate. Many further enter their artwork for judging as part of the weekend’s juried art competition, which includes awards and cash prizes across various categories. When the market started in 1993, patrons purchased artworks from market artists and donated them to the museum to add to the permanent collection. In 2004, the museum created a formal purchase prize for the juried art competition.

Artists’ booths will be inside the museum and outdoors on the Eiteljorg grounds with an opportunity for eager art-buyers to receive an early start on shopping by registering for the Market Morning Breakfast at 8 a.m. Saturday June 25. Contact Jennifer Hiatt at [email protected] or 317.275.1360 if interested.

Throughout the weekend there will be a variety of on-site food options and a wide range of cultural performances including music, dance and storytelling, as well as family art-making activities. 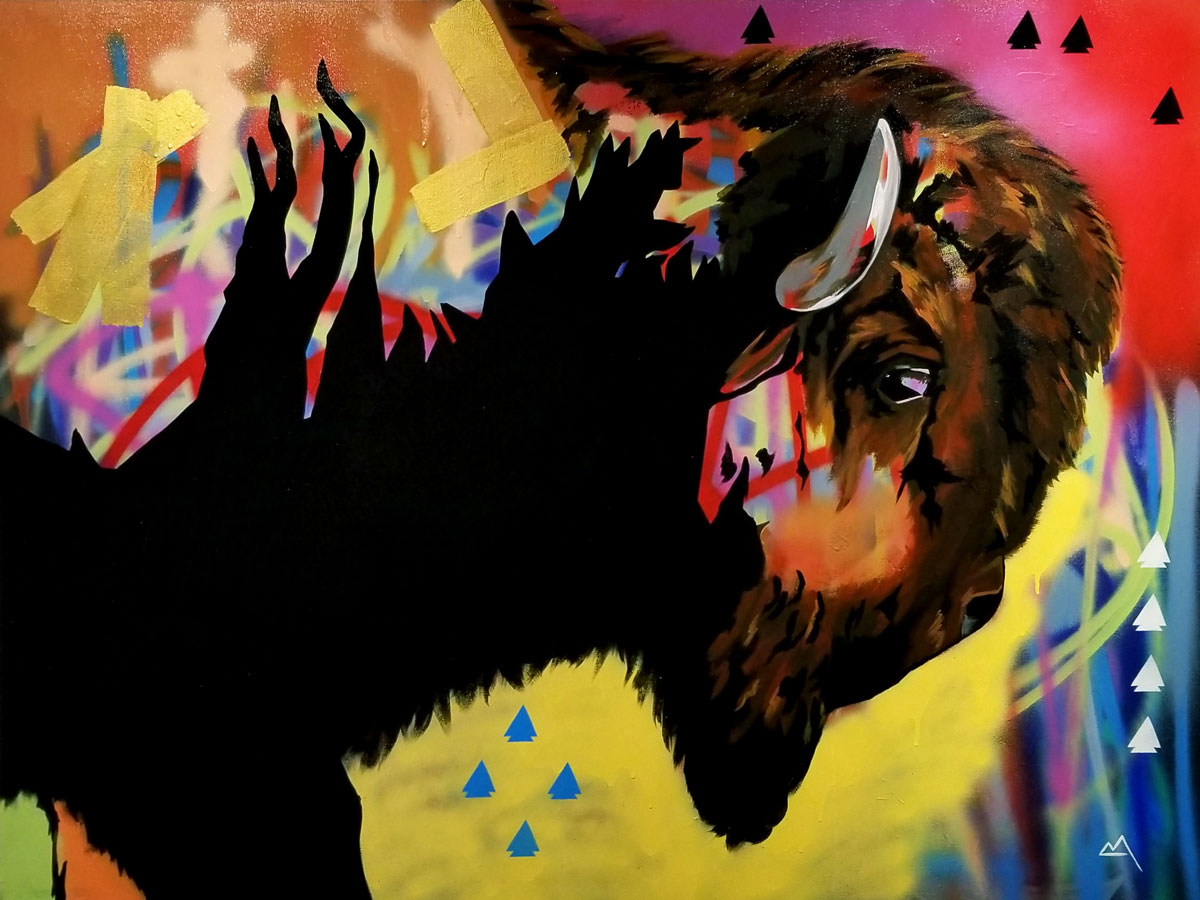 Roberta Begaye, Diné-Navajo, My Fave, 2021, acrylic and aerosol on canvas, 12 x 12 inches | Courtesy of the Artist

“In departing from the way museums typically have presented Native peoples’ stories, the new Native American Galleries will create a space for Native peoples themselves to tell their own stories,” Eiteljorg President and CEO John Vanausdall said. “Visitors will come away from the galleries with a new understanding that Native American cultures are still with us today and the art they create depicts the past, present and future.”

Closed to the public since September of 2021, the old galleries were staged with the same floor plan and ethnographic methodology since the museum opened in 1989. The updated presentation ditches previously bulky wooden display cabinets in favor of all-glass cases offering 360-degree views of the art; also gone is the grouping of material by geography, as the new galleries are updated to organize Native works under the themes of Relation, Continuation and Innovation. This has been done to demonstrate the continuum of Native art, both customary – traditional – and contemporary, told through the voices of Native peoples.

Selecting themes relevant to all 574-plus U.S. federally recognized tribes, nations, pueblos and villages, not including state-recognized tribes, as well as the 630-plus Canadian First Nations, not including the Inuit and Métis, each with unique philosophical and spiritual subtleties, was a monumental undertaking. Leading the effort to do so were museum curators Scott Shoemaker (Miami Tribe of Oklahoma), Dorene Red Cloud (Oglala Lakota) and Elisa Phelps. They received assistance from other museum curators and staff along with the museum’s Native American Advisory Council. 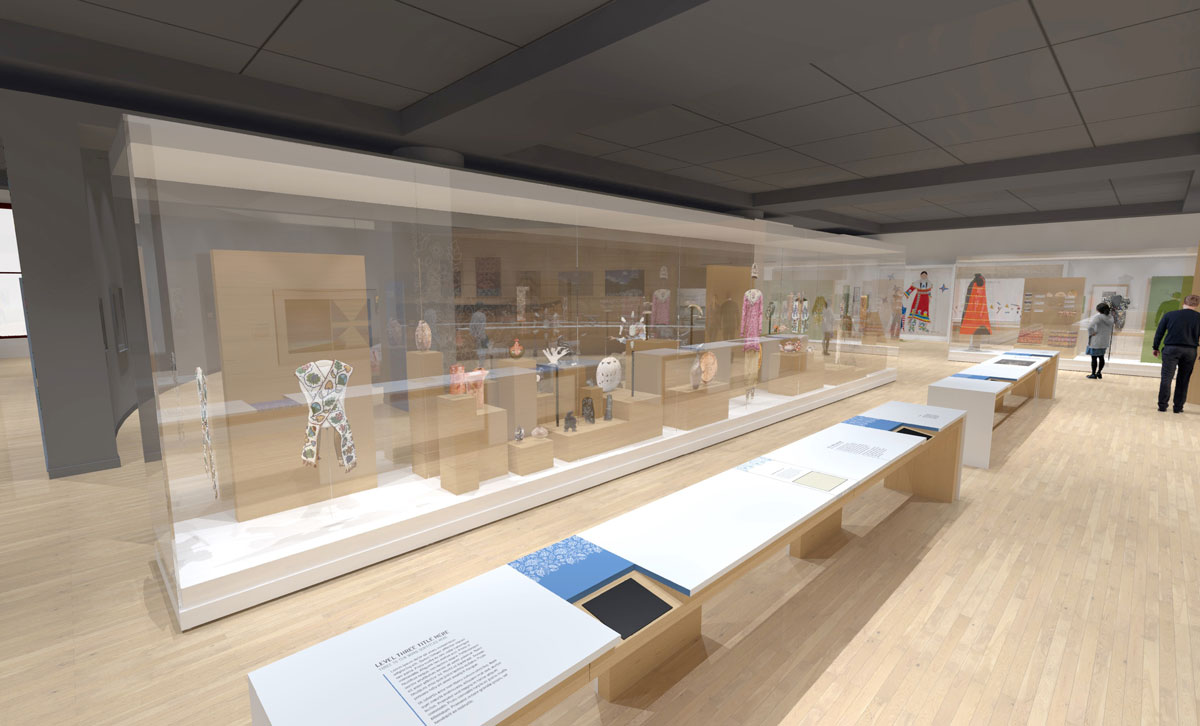 “Since the latter part of the 20th century and early 21st century, museums with Native American and First Nations art have been reevaluating how they exhibit these collections,” Corbin said. “Museums are recognizing that they no longer are the principal experts about the lives and arts of North America’s Native peoples and are accordingly turning to these First Peoples for direction and content. It’s a space for Native peoples themselves to be the authority of their stories.”

The Eiteljorg more fully recognizing the nuances, inventiveness and unending possibilities of Indigenous art was overdue.

The updated galleries also have an updated, regional emphasis. “Connected by Water” highlights art made by Native peoples of the Great Lakes and surrounding areas. Beadwork, ribbonwork, carvings, weavings, basketry and textiles – many items new to the museum from a major collection acquired in 2019 through a $2.83 million grant provided by Lilly Endowment Inc. – offer fresh insights into the creative expressions of the Indigenous people whose homelands are found within driving distance of the museum.

At the galleries’ primary entrance, visitors will be welcomed by recorded audio greetings in the languages of the original inhabitants of Indiana: the Miami, Potawatomi, Delaware, Shawnee, Peoria and Kickapoo.

Giving prominence to these oft-overlooked Woodland tribes further distinguishes the Eiteljorg from the preponderance of Native-focused museums and art galleries which continue largely prioritizing Plains and Southwestern nations – the archetypal Indians from American popular culture’s favored “Cowboys and Indians” storytelling.

In the galleries, audio descriptions, larger text on labels, improved lighting, hands-on interactives and touch samples will contribute to the exhibition being more accessible and inclusive. All of this is part of the museum’s larger Project 2021 capital endowment campaign, now in the home stretch of raising $55 million by October 2022 to additionally fund a major revamp of the museum’s family discovery area, expansion of its multipurpose event space and tripling of the endowment. 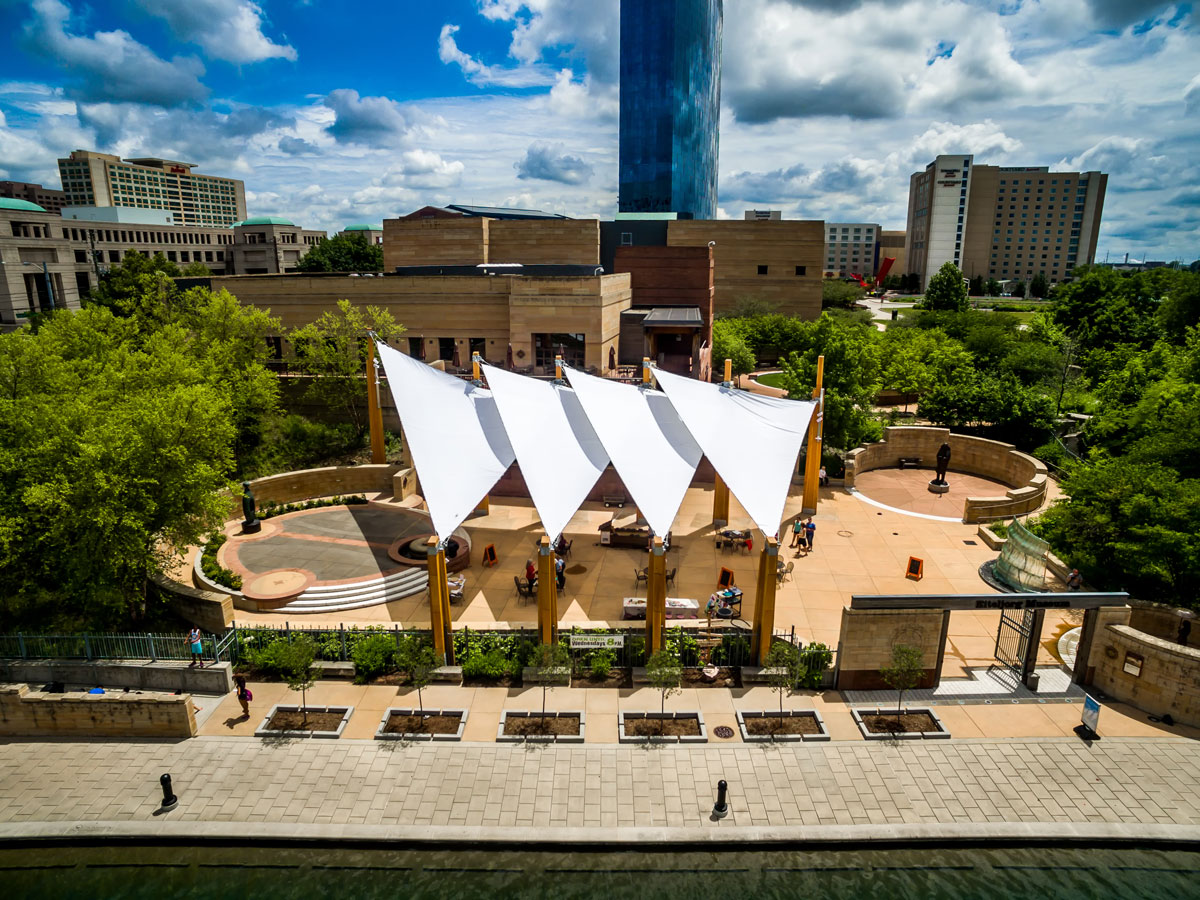