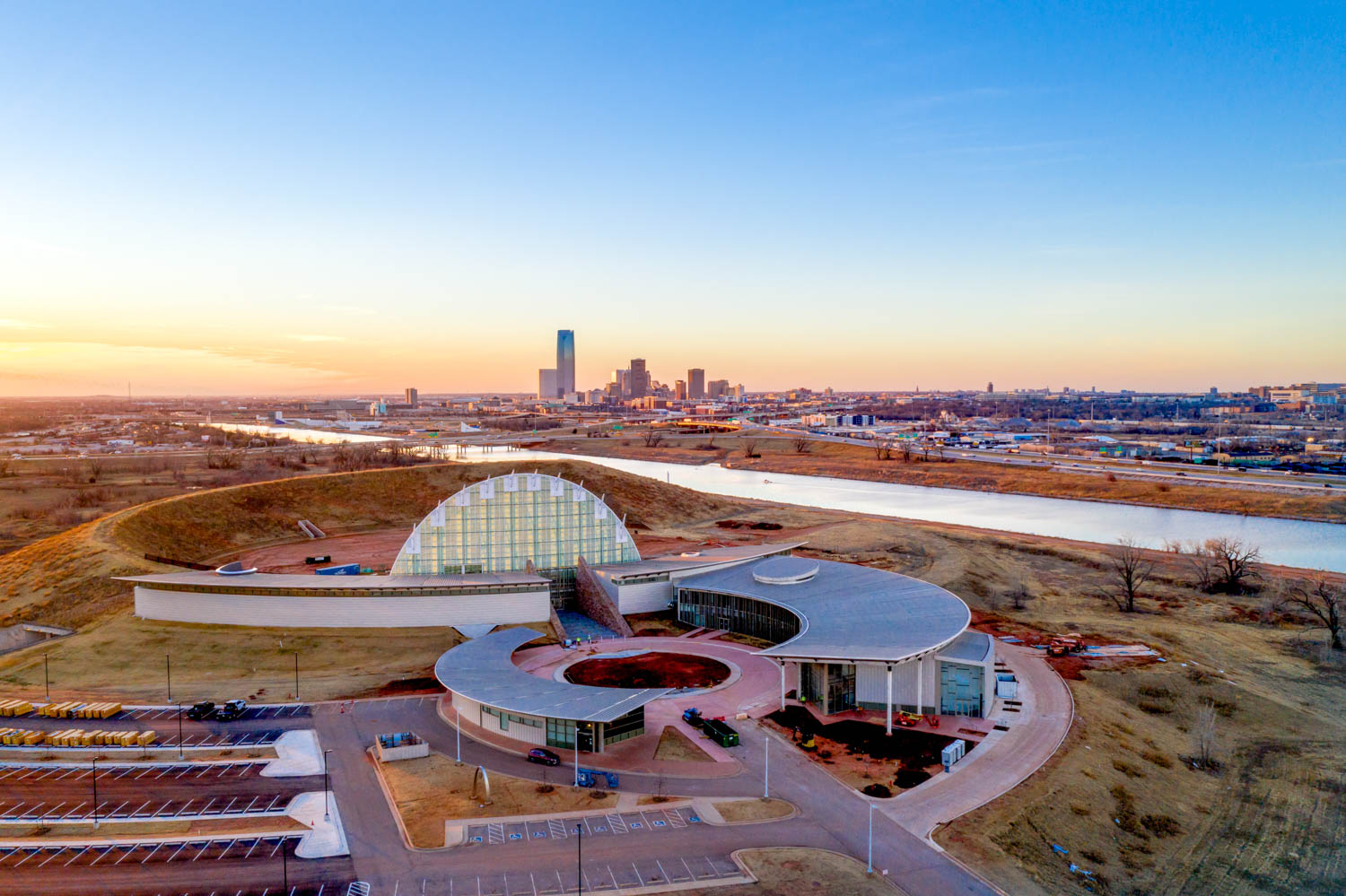 When the First Americans Museum opens in Oklahoma City in September of this year, it will represent the culmination of more than 20 years of planning, fundraising, waiting, construction and imagining what it would mean for Native people to tell their own story on their own terms. That seems like a long time. It is a long time.

Contrasted against the story of Native people in Oklahoma, however, it’s, but a moment.

The five tribes indigenous to the area that is now the state of Oklahoma were thriving there centuries before contact with European colonizers. They are the Osage, Caddo, Kiowa, Comanche and Wichita. The remainder of the peoples who now make up the 39 total tribes calling Oklahoma home began arriving there after Andrew Jackson signed the Indian Removal Act in 1830.

That legislation called for the U.S. Government to negotiate removal treaties with eastern tribes fairly, voluntarily and peacefully. In reality, it led to the forcible relocation of Native peoples off their homelands in the east and transportation to Indian Territory in the West.

The most infamous atrocity resulting from the Indian Removal Act was the Trail of Tears where in 1838, thousands of Cherokee – men, women, children, the elderly, the sick – were marched 1,200 miles from northern Georgia on foot, during the winter, with scant supplies, by the U.S. Army. 5,000 may have died along the way.

Oklahoma was the destination of the Trail of Tears.

Importantly, the museum will do more than retell old stories.

“People want to talk historically, but (Native people) have a living culture, this is a living history that we're talking about,” First Americans Museum Director of Communications and Marketing Ginny Underwood (Comanche/Kiowa) said. “There was a (2018) study from Reclaiming Native Truth that said (40%) of the country don't even believe that Native peoples still exist – which is astonishing to me – so that speaks to the importance of the museum; if you've always wanted to learn more, and you know that you got the wrong history, here’s your opportunity to begin educating yourself at another level.”

Underwood believes that education, as provided by the descendants of the people who lived it, will have greater benefits beyond just improving the knowledge base of non-Native people. 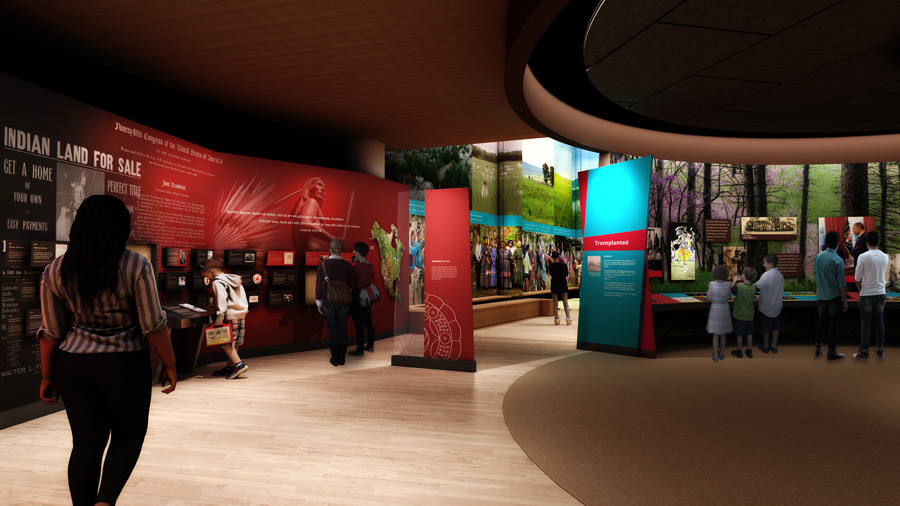 Construction begins, and is then delayed

Construction on the 175,000-square-foot museum began in 2006 following a ground blessing ceremony. That work would grind to a halt in 2012 when state funding ran out. Following a delay of three years, the City of Oklahoma City partnered with the state and the American Indian Cultural Center Foundation to push the $175 million project through to completion.

Presently, major construction has been completed. Museum staff are moving into their offices. Exhibition spaces are being built as curatorial team members are going through collections items to begin setting up for how the museum will look to visitors.

Numerous subtle, yet important details have been included in the design.

The museum aligns with the cardinal directions, as First Americans have done for thousands of years. Seasonal programming is planned during these special times of year to celebrate the winter and summer solstice as well as the spring and autumnal equinox.

An earthen mound pays tribute to the great mound-builder civilizations dating back to roughly 500 A.D. Walking to the top of the mound is steeped in metaphor, representing life’s journey and a relationship to the cosmos. The mound cradles the outdoor Festival Grounds which will feature activities including powwows, stick-ball games, concerts and cultural festivals.

FAM will be an active space. A lively space. A vibrant space.

The east facing entry gate aligns with the rising sun. Two dramatic inclining walls rise to 40′ there and are built from Mesquabuck stone. This amber and white stratified stone carries the name of the Potawatomi Chief Mes’kwah-buk, whose name signifies the color of the sky at sunrise and sunset.

The Hall of the People features ten columns with each column representing the estimated ten miles a day traveled daily by Native people from original homelands to Indian Territory during forced removal. The space will provide stunning views of the winter and summer solstice as well as the spring and autumnal equinox 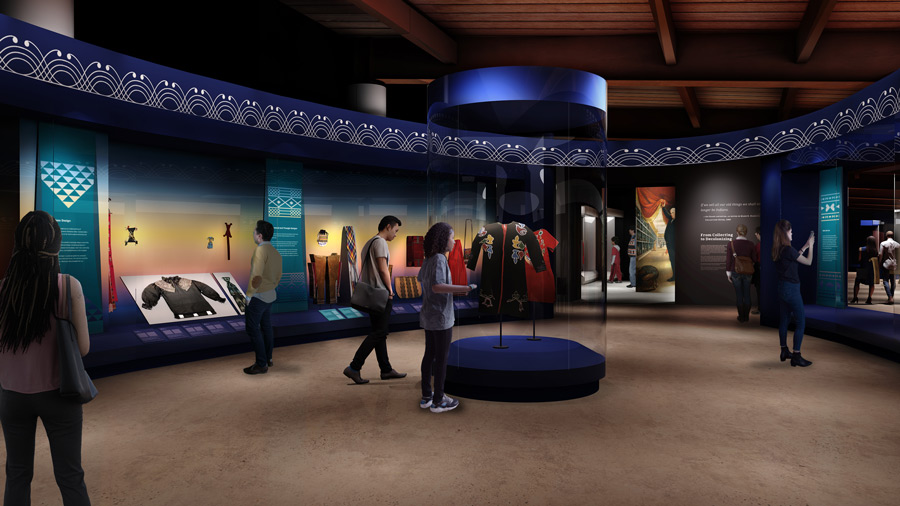 Sharing a full – and complex – story

“There are 39 distinct peoples (in Oklahoma), there’s 12 linguistic families here in Oklahoma, each tribe has its own language and cultural practices. It's like taking all of Europe and trying to tell the story of all the different countries and peoples,” Underwood explained of the story being told at FAM. “It's complicated, there's lots of nuances, lots of things that people don’t recognize about Native peoples and our distinctions, and that's part of what the museum is about, sharing those differences.”

One of FAM’s many highlights will be objects on display from the collection of the Smithsonian Institute. These objects are Oklahoma-based, but this will be the first time they’re coming back to the area.

“Part of the problem with the Native narrative is that it has been written by non-natives for so long and people fall into stereotypes pretty easily when it comes to romanticizing Native culture or traditions,” Underwood said. “What (non-natives) know about is the Hollywood version of Native communities. There's a huge information gap from what most people learned about ‘Indians,’ let's say – to use that term – in (grades) K through 12. A lot of texts – there's research that shows – only went to the 1920s, so there's this huge information gap from what contemporary Native issues are today.”

The First Americans Museum would like to acknowledge that the Indigenous people who inhabited these lands before the United States was established include the Apache, Caddo, Tonkawa and Wichita. The tribes who have a historic relationship to this region include the Comanche, Kiowa, Osage and Quapaw.