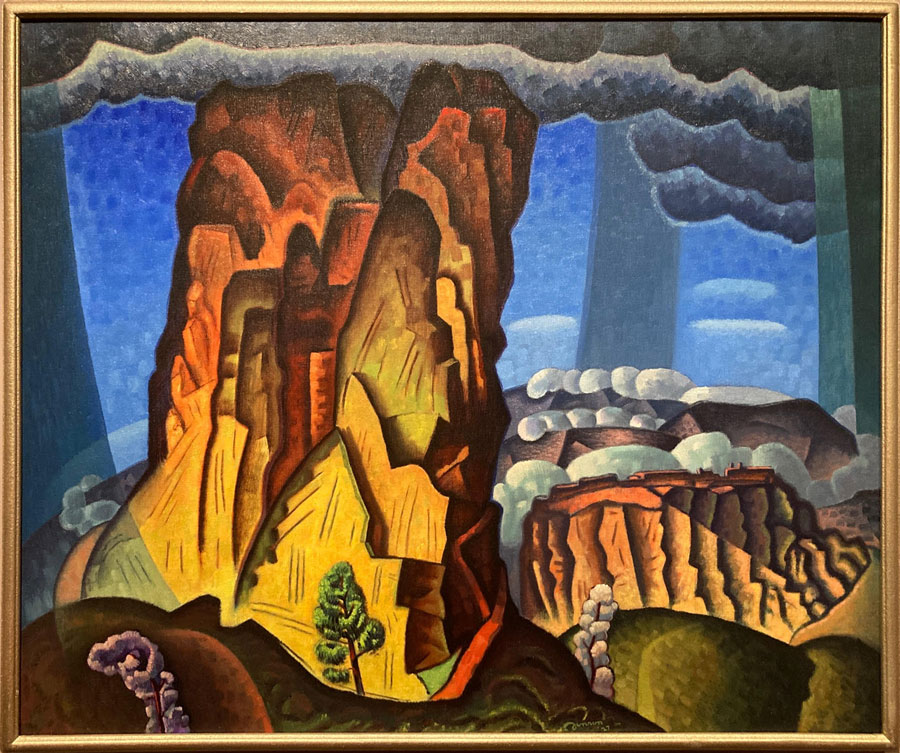 On my last visit, the permanent collection was off view as the building housing those works was undergoing a massive renovation. I was certain I’d never seen this picture before.

While Raymond Jonson is not a totally obscure artist, he’s hardly a household name of the sort whose works fill museums to the point of losing track about which of his paintings you’ve seen where.

Particularly among the Western art museums.

I had been mesmerized by a later cityscape, City Lights (1933), on a recent visit to New York where the Michael Rosenfeld Gallery in Chelsea represents his work. Stunning, precise, futuristic images. Nothing like this rocky canyon from the southwest facing me in Denver.

I spent several minutes in front of the picture, racking my visual archive.

Then I remembered Tony Abeyta talking about Raymond Jonson (1891-1982) from a recent “Essential West” interview with the artist I conducted. Abeyta mentioned how Jonson was a leading member of Transcendentalist Painting Group formed in Albuquerque in 1938.

“Through new concepts of space, color, light, and design, the group sought to carry painting beyond the appearance of the physical world to imaginative realms that were idealistic and spiritual,” according to the Denver Art Museum.

Abeyta was quick to acknowledge the influence Jonson had on his father, Narciso. That story is being shared in an exhibition at the Wheelwright Museum of the American Indian in Santa Fe. Raymond Jonson, suddenly, has been popping up everywhere I look. New York. Denver. New Mexico.

What about this picture is so familiar?

Then it struck me! Those dramatic cascading sheets of sunlight.

Tony Abeyta has utilized a similar effect with light and rain in his stunning southwestern landscape paintings. Those paintings do feature regularly in museums and auctions. One of the finest examples hangs at the James Museum of Western and Wildlife Art in St. Petersburg, Florida where I visit regularly – Untitled (2012). 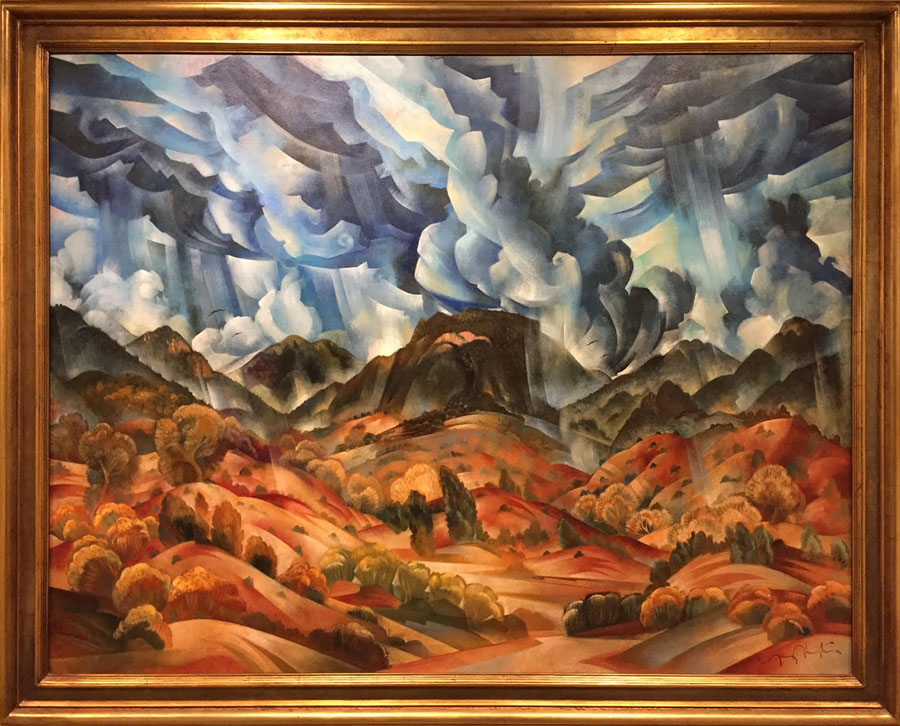 Raymond Jonson’s Cloud Forms & Mesas No.1 from 1926, also in the DAM collection, but not on view, is a dead ringer for Abeyta’s contemporary interpretations of the landscape.

What Raymond Jonson passed down to Narciso Abeyta clearly made its way through the years to Tony as well. And to all of us.

From Raymond Jonson in New Mexico in the 1930s to the Abeyta Family in New Mexico to the Denver Art Museum and the James Museum in Florida today.

These are the connections that can only be made at an art museum standing in front of the work. At least for me.

I came to the art world late. I was 40 before my passion was sparked. All the YouTube videos, documentaries, books and podcasts I take in provide background, but my “discoveries,” my “breakthroughs,” where I capture the artists happens in museums and galleries. It happens in person.

This is what my art addiction lost to the pandemic, relegated as it was to the screen and page.

Raymond Jonson becomes just the latest in a long line of my favorite artists who I was mostly or totally unfamiliar with prior to experiencing their work in person: Dusti Bongé, Beauford Delaney, Earl Biss, Archibald Motley, Odilon Redon, Cecily Brown, Mildred Thompson.

They’re all “art world” famous to one extent or another, but none so prominent that your average art history survey text is likely to include them. You can draw your own conclusions as to why that is, Redon being the only white male among the list I mentioned.

That’s one of the reasons the art museum is so important, and why artists being represented in museums is so important. Museums can’t only show the work of Rembrandt, Turner, Manet, Kandinsky and Pollock. Or in the Western genre, only the work of Moran, Bierstadt, Remington, Russell and the Taos Founders.

There’s not enough to go around.

Who else they choose to display exposes those artists – and those visitors – to a wider, fuller, richer world of creativity and creators beyond the household names. Who else museums choose to display places those lesser-known artists on a similar footing with the standard-bearers.

As my friend Adam Levine, director and CEO at the Toledo Museum of Art, says, “The superpower that an art museum has is when something goes up on the wall, it's considered good. We set the canon.” 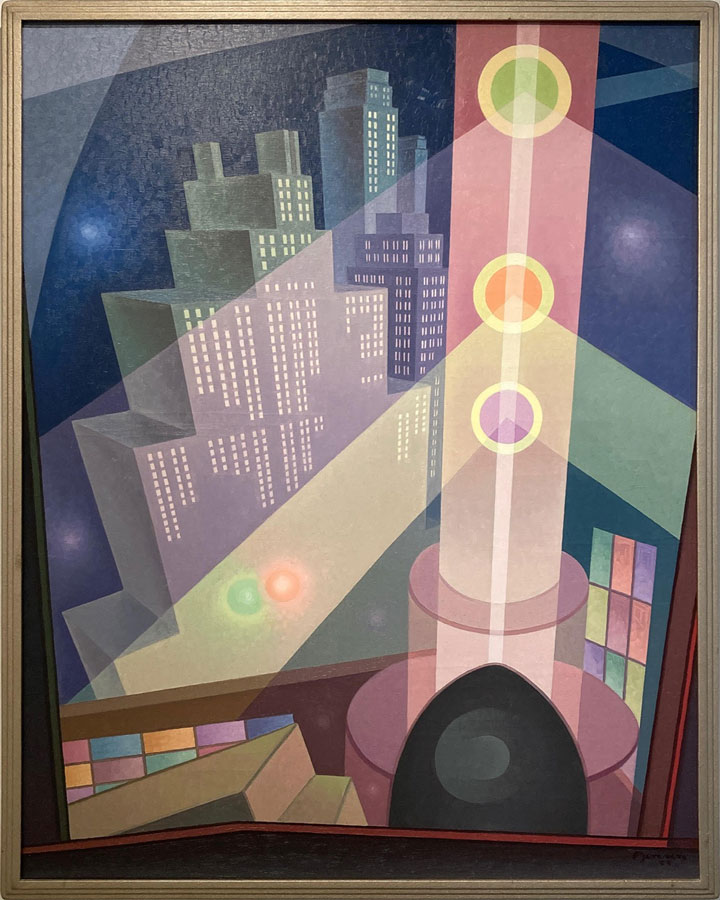 Expanding the canon and what is considered “Western Art” is an objective of mine. It’s an objective for the Denver Art Museum as well. Without a broader, more inclusive, constantly evolving perspective on “Western Art,” the genre is sure to stagnate and whither.

DAM offers the most robust and expansive presentation of Western Art I recall seeing in a museum. Beyond Raymond Jonson – a Black man working in the avant-guard of Modern art (a precursor to his cityscape paintings I referenced also hangs in the museum) – artwork from Native American artists features more prominently. Fritz Scholder, of course, but Leon Polk Smith as well.

DAM displays Agnes Pelton in its Western American Art galleries. She would become the most prominent of the Transcendentalist painters for her spiritual, celestial, California desert paintings.

Agnes Martin is here too. How is she not a fixture in more Western art museums?

Say what? Why is one of Europe’s most prominent modern artists on view in DAM’s art of Western America galleries? A fascinating story for another day. One I was completely unaware.

The Denver Art Museum’s Western American Art galleries do lean heavily on Moran and Bierstadt and Russell and Remington and the Taos Society of Artists, but the unexpected treats sprinkled in like Jonson and Pelton add welcome and necessary additional flavors to the display.

Cowboys around campfires and horses will always be a pillar of Western Art, but for the genre to thrive and expand over the next 150 years like it has the past 150 years, it will need to welcome the Raymond Jonsons and Agnes Peltons of the art world the way the Denver Art Museum has.