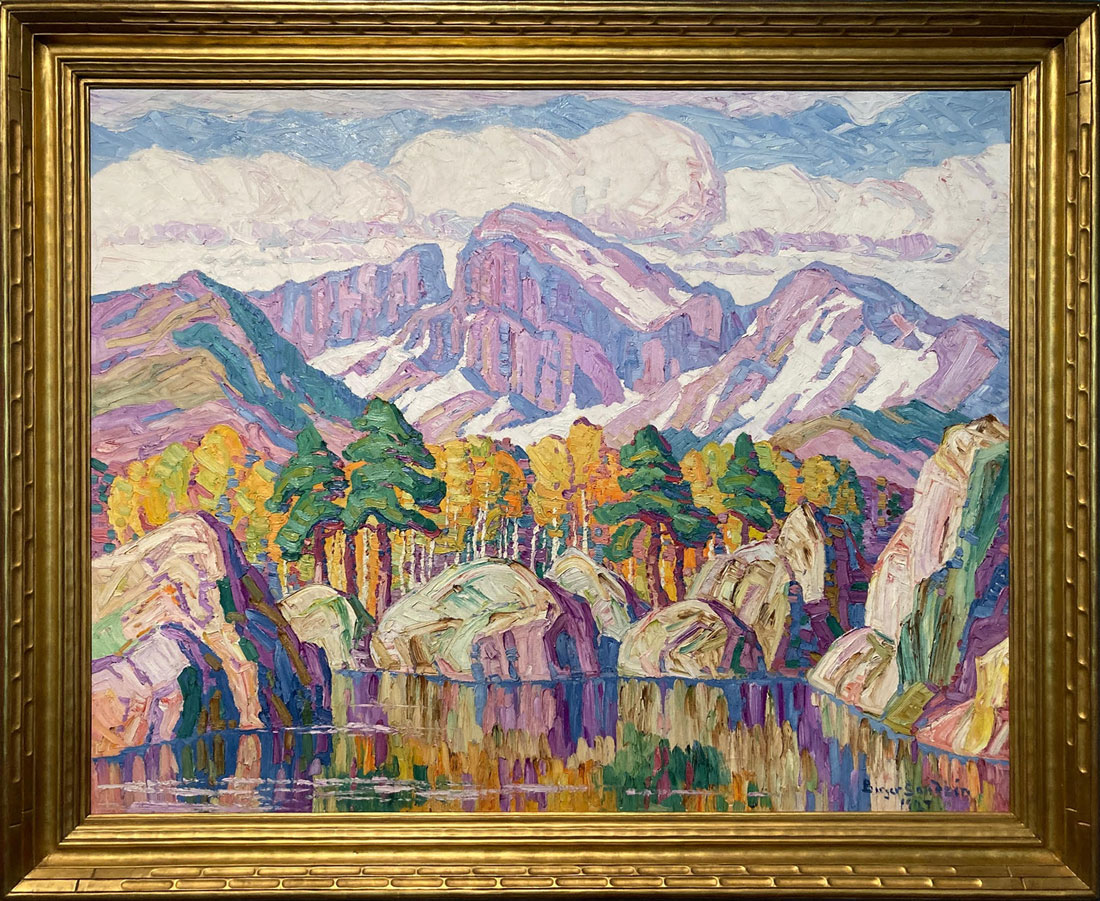 Visitors to the Denver Museum of Art’s Western American Art galleries are greeted by a painting of such mindboggling beauty as to defy ordinary aesthetic descriptions. In Shakespeare’s “Romeo and Juliet,” Romeo was so stricken by Juliet’s appearance that the limitations of physical characterization wouldn’t suffice in describing her. Romeo, instead, compared her to a summer’s day – “thou art more lovely and more temperate.”

Shall I compare thee to a swirling bowl of rainbow sherbet? Thou art more colorful and more refreshing.

A luscious painting. The color of gumdrops.

Applied in generous proportion as if scraping that decadent frosting off the cake’s top with an index finger and reapplying it to canvas.

10,000 brushstrokes – none longer than a couple inches – conjure these colors into a scene depicting snow-capped mountains overlooking evergreen and aspen trees which further overlook rocks reflecting their images back from the perfectly still surface of a lake.

Stepping off the elevator on the seventh floor of DAM’s newly renovated Martin Building and turning to the right, museum curators have framed Sandzen’s masterpiece at the entrance, signifying its magnificence. This spot represents the so-called “pride of place.”

Sandzen’s Symphony illustrates a symphony of paint. A symphony of color. A symphony of the euphoric feelings experienced by those who look into the mountains and see them the way Sandzen does. People who not only recognize their shape and surface, but their soul and spirit.

People who love the mountains.

Without those feelings, Sandzen’s confectioner’s treatment of this landscape might seem childish. Perhaps surreal. An “Alice in Wonderland,” Tim Burton treatment of the subject produced for effect.

The mountains DO look this way to those of us beguiled by them.

It’s why 1,000 tacky tourist shops stay in business selling millions of sweatshirts, t-shirts, snow globes and tchotchkes stating, “the mountains are calling, and I must go.”

Mountains are symphonic in their pinks and purples and yellows and peaches. A symphony of rock and snow and trees, of rushing water and soaring peaks; exuberant wildflowers and trilling birds.

Browns and grays can’t touch the emotional depths animated by these settings.

Sandzen was born in Sweden in 1871, moving to Kansas to teach art, music and languages in 1894. A significant figure with works in the permanent collections at major institutions across the country, his notoriety nonetheless falls far short of other turn of the century artists better known for their Western landscapes: Moran, Bierstadt, Russell, Remington, Dixon, the Taos Founders.

Artwork of theirs is on view in DAM’s Western galleries as well, but none of them achieve what Sandzen has here, an ecstatic, joyous, untampered, soaring, Technicolor symphony in oil paint expressing his affection – and ours – for the mountains.