Achieving a more comprehensive understanding of the American West will necessarily involve incorporating more stories and storytellers from Asian perspectives. Historic and contemporary artists should serve as key figures in doing so.

Along these same lines, for Western art to remain relevant into the future beyond niche nostalgia for gunfights and cattle drives, forwarding Asian American artists into the genre should be a priority for every museum, gallery and collector. Imagine a diverse and robust contemporary Western art scene where Black, Mexican, Indigenous and Asian voices have equal representation to their white counterparts.

In the words of John Lennon, “it isn’t hard to do.” 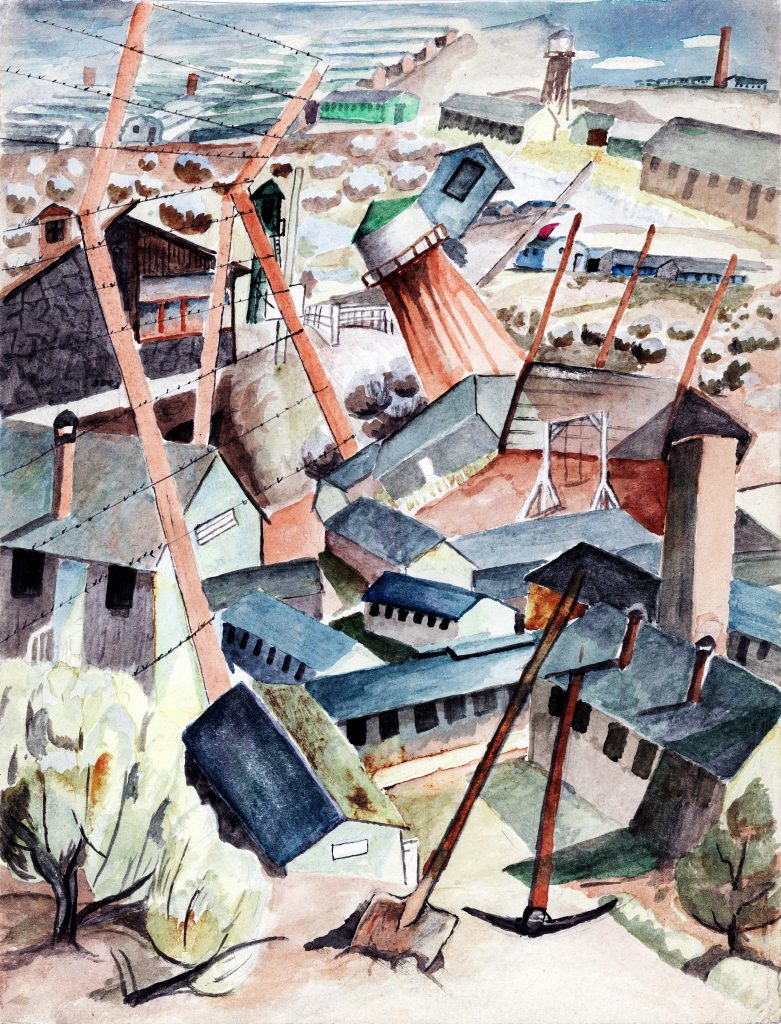 Japanese American artists in the West

35 drawings, prints and watercolor paintings by Chiura Obata (1885-1975) were recently gifted to the Utah Museum of Fine Arts in Salt Lake City by the artist’s estate. The UMFA, which hosted Obata’s travelling retrospective in 2018, purchased three additional works.

The artworks reference Obata’s time spent in detention at the Topaz Relocation Center in the Utah desert. Obata was a professor at the University of California Berkeley in February 1942 when Japanese Americans on the West Coast were forcibly dislocated from their lives and sent to internment camps in a wave of anti-Asian racism and panic following Imperial Japan’s attack on Pearl Harbor.

“Because many of these artworks were created in Utah, we hope people will be inspired to learn the history of wartime incarceration and go visit the actual camp site in Delta (Utah) as well as the Topaz Museum,” Kimi Hill, a member of the artist’s family, said in a statement.

Obata was among some 8,000 Japanese Americans – most of them American citizens – who spent over three years in the dusty barens of Topaz, removed from their homes, their jobs, their businesses, allowed to take only what they could carry from the lives they worked so hard to build. Surrounded by barbed wire under the constant scrutiny of armed guards, stories of perseverance among the prisoners – who were never accused of any wrongdoing, nor stood trial for any supposed hostility against America before losing their freedom and dignity in utter defiance of the nation’s so-called “ideals” – stand out as particularly courageous not only in the history of the West, but U.S. History writ large.

Obata, for example, founded an art school for fellow detainees. What began as a program for children to continue their education while giving them some semblance of normalcy eventually expanded into the Topaz Art School which numbered 600 students at its height, from young kids to the elderly.

This recalls the story of famed designer George Nakashima (1905-1990).

Nakashima and his wife, Marion Okajima, were both American citizens, both born in the United States. Both were college graduates with degrees from prestigious universities, George with an undergraduate degree from the University of Washington and a master’s degree in architecture from MIT, Marion a degree from UCLA – exceedingly rare for a woman in 1940s America. George Nakashima had traveled the world as an American citizen.

No matter, they, along with their baby daughter, were forced from the Seattle home to the Minidoka internment camp in Idaho.

While interned, George Nakashima met Gentaro Hikogawa, a Shokunin (master craftsperson) trained in traditional Japanese carpentry. Under his tutelage, Nakashima learned to master traditional Japanese hand tools and joinery techniques. The knowledge would go on to inform and distinguish him as arguably the world’s foremost furniture maker for the remainder of his life.

Artistic response to Japanese American internment was further explored by the Missoula Art Museum in 2020 during the exhibition “Witness to Wartime: The Painted Diary of Takuichi Fujii,” which cataloged the work of Takuichi Fujii (1891–1964), a modernist artist who left a remarkably comprehensive visual record of his experience during World War II as a Japanese American detainee.

In 1942, like Nakashima, Fujii and his family were forcibly removed by the U.S. government from their home in Seattle and relocated first to a temporary detention site in Puyallup, Washington before landing at Minidoka.

During his three years of incarceration, Fujii kept a detailed, illustrated account of the daily life and routines of the incarceration camp. Additionally, he painted 130 watercolors that expound on the diary entries and include self-portraits, sketches, landscapes and more.

Historian Roger Daniels called Fujii’s collection of work, “the most remarkable document created by a Japanese American prisoner during the wartime incarceration.”

Chiura Obata, George Nakashima, Takuichi Fujii, artists who were either born or spent the majority of their lives in the American West, depicting Western scenes or using Western materials, with personal stories essential to understanding the region. Why aren’t they considered Western artists? Wouldn’t Western art be richer if they were? 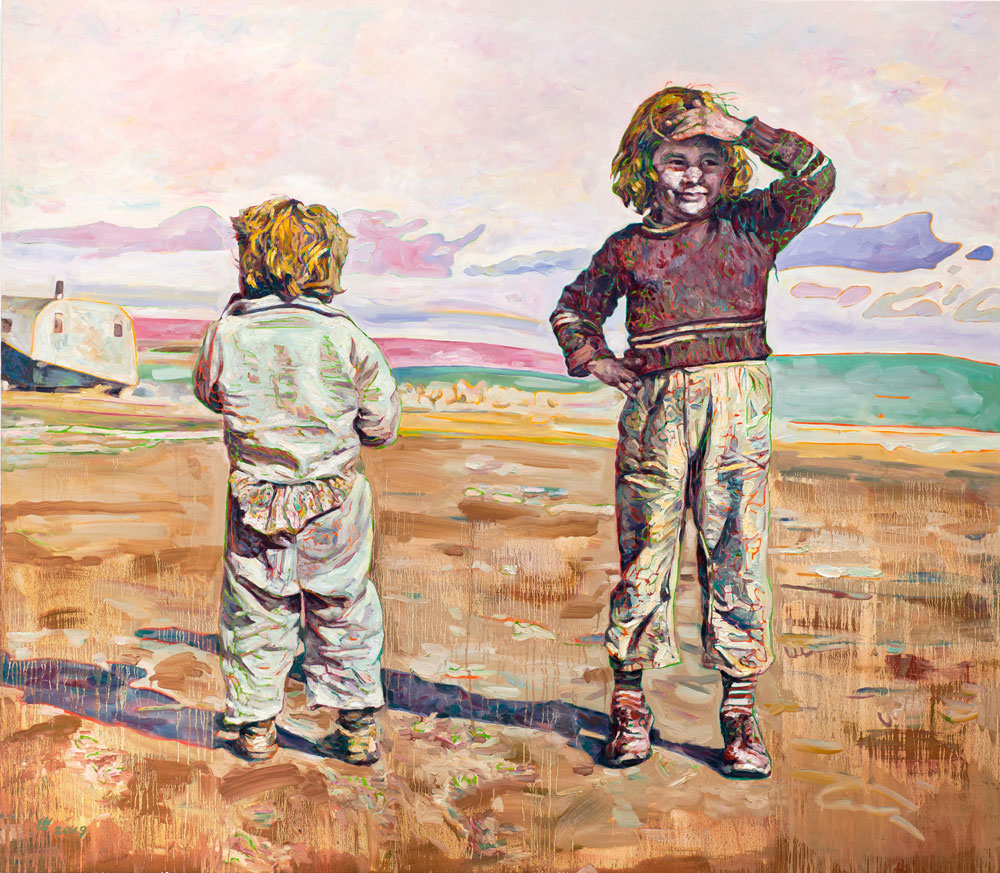 The flip side to this coin are artists who fled Asian countries for the U.S. fleeing persecution. Hung Liu (b. 1948 in Changchun, China; d. 2021 in Oakland, CA) fits this description.

Born into an educated family that resisted Mao’s takeover of China, her father was taken political prisoner by the Communists in 1948 when the artist was still an infant. Barred from contact with the outside world, Liu wouldn’t reconnect with him until 1994.

In her early 20s, Mao’s Cultural Revolution, which mirrored homicidal mania, demanded Liu be sent to four years of forced agrarian labor, essentially, to work the education out of her for reprogramming into a peasant lifestyle.

Liu was able to escape the country in 1984 when, after four years of effort following a thaw in U.S.-China relations due to Richard Nixon’s visit to the country in 1972, she secured a passport from the central government to continue her art studies at the University of California in San Diego.

Having lived through wars, political revolutions, exile and displacement herself, Liu artwork presents a complex, multifaceted picture of not only an immigrant experience to the American West broadly, but an Asian Pacific American experience specifically.

Liu, likewise, with an open mind could be coopted as a “Western artist” and what a coup it would be to add her to the field.

After she began teaching at Mills College, Oakland, in 1992, Hung started researching California history, noting differences in the way she had understood it as a child in China and as an adult American citizen. Her exhibition “Old Gold Mountain,” held at San Francisco’s de Young Museum in 1994, explored the history of Chinese American laborers in the U.S.

Liu’s investigation of the American West and credentials as a “Western artist” extend to her “Chinese in Idaho” series.

During the late 1800s, many Chinese immigrants arrived in the western U.S. as enslaved people or servants. Others came to search for gold or work on the railroad. The population of Chinese in the Territory of Idaho was large in the 1870s, but had nearly vanished when Liu began her series of paintings reinterpreting black-and-white photographs from the life of Polly Bemis (1853–1933).

Bemis was smuggled into the United States and sold into the slave trade at age nineteen before marrying an American man. She eventually ran a boarding house, among other businesses, on a ranch near the Salmon River, where she was beloved by her community.

Working with the Oakland Museum of California’s Dorothea Lang Archive in the final years of her life, Liu’s most recent large-scale paintings featured a series based on Lange’s iconic Depression Era photography which humanized the Dust Bowl and the migrants who left America’s devastated grain belt for the hope of better days in California.

Another brilliant artist who spent her life in the West telling Western stories. Hung Liu – and Dorothea Lang for that matter – would both greatly enliven the Western art genre if brought under the tent.

See for yourself as Liu’s personal history anchors “Hung Liu: Golden Gate (金門)” at the de Young Museum through August 7, 2022.