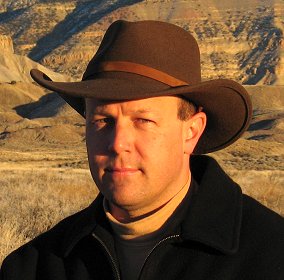 A Colorado native, Stephen grew up in Loveland, a small town on the northern Front Range. Though his early education was focused on science and math, his muse was a constant influence.

“Drawing has been second nature to me my entire life,“ says Stephen. “I was encouraged by others to pursue a career in engineering or computer science, but in my heart I knew that was not the path for me. I needed to follow my talent.”

Enrolling as an art student at Colorado State University, Stephen was again encouraged to take a direction he did not feel suited him.  “My tendency to want to work in a traditional, representational context was strongly discouraged. But I resolved to build my life on my own terms, so I stuck to my guns, and focused my coursework on graphic design and illustration, areas where traditional skills were emphasized and valued. I also attended regular figure drawing sessions.”

It was during his time at CSU that he began backpacking with his wife in the desert country of southeastern Utah. “I had never seen anything like it,” recalls Stephen. “The color, the light, and the feel of the desert inspired me deeply.  They transformed what, to that point, had been only a passing interest in the landscape into a driving passion to paint it.”

Earning his BFA in Graphic Design from CSU in 1992, Stephen moved to the small mountain town of Carbondale, Colorado, and began the work of establishing himself as a serious career artist. “Trouble was, “says Stephen, “a BFA teaches you how to BE an artist, not how to earn a living as one.”

A few years later, in 1995, a fortuitous workshop with noted painter Skip Whitcomb introduced Stephen to the practice of “plein-aire” painting and got him working in oils. Stephen recalls, “Skip opened my eyes to invaluable tools and techniques for painting the landscape from life, and to an art world that I had never glimpsed in college - a world of artists both in America and abroad who had continued in the traditional ways of painting long after the “isms” of the early 20th century had taken root.  That week was nothing short of a revelation.” 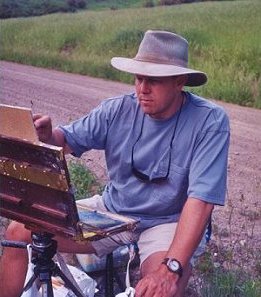 Though Stephen continues to paint on-location, his approach is not doctrinaire. “Ultimately, a painting is an idea. Nature is the source of my inspiration, and working from life is the best way to gather visual information that supports the idea. But for me there also has to be emotional content. I don’t think it matters how you arrive at a finished painting – what matters is giving viewers of the work a sense of the “wow” moment the subject inspired in me.”

“I view my work as a distinctly personal journey of discovery.  My studio is a laboratory where I can pull together a host of disparate things - field sketches, photos, memories, imagination, and even a bit of science in the form of color theory and compositional geometry. These things all blend together in my exploration of an idea. When the process works it creates a canvas that contains an evocative glimpse beyond the surface of subject and artist and into the essential character of both.”

Stephen’s work has been the subject of seventeen solo exhibitions and has appeared in dozens of group exhibitions around the country, including shows at the Gilcrease Museum, Albuquerque Museum, Laguna Art Museum, National Museum of Wildlife Art, and Salmagundi Club in NYC. His work has also been featured in articles in numerous regional and national art publications, including Southwest Art, Western Art Collector, Plein Air, and Western Art & Architecture. He is represented by galleries throughout the four corners region and resides in Fruita, Colorado.

I endeavor to approach my work with, as jazz musician Stan Getz put it, "an unpretentiousness, spontaneity, and poetry of honest emotion." Plein-aire painting, to my mind, is ultimately about experience. It is a way for me to explore and savor the raw sensations of a given time and place, and allow myself to be guided by the spontaneous impressions I receive. It goes beyond just seeing a landscape as a picturesque subject - it is a personal journey of discovery, through which I attempt to create paintings that carry within them the power and emotional content of my direct experiences.

I focus on pure landscapes because they intrigue me. I feel that landscape is so much more than just a backdrop for human affairs or wildlife. It has an intrinsic beauty and value that cannot be ignored or denied. A landscape painting carries an implicit sense of solitude and silent contemplation; an invitation, if you will, to the viewer, to step out of their world and lose themselves for a moment in the sublime beauty and grandeur of the natural world.

Whether working in the field or the studio, I strive to infuse my work with a quality that exceeds the mere appearance of my chosen subject. I seek to share with viewers not just what I found interesting, but why it interested me. It is my aspiration that my paintings, when they are successful, become glimpses beyond the surface of both subject and artist and into the essential nature of both.

I love the diversity of subjects that the western U.S. offers, and enjoy traveling and painting wherever I am. Wherever I find myself, I remain receptive to the ideas that the landscape suggests, rather than approach it with a set agenda. As I open up to my surroundings ideas begin to take shape, and I begin sketching, moving beyond my first impression, discovering which possibilities among nature's endless variety are most meaningful to me, and refining those concepts through small, quick thumbnail drawings.

Once I have settled on a subject and composition, my field study proceeds fairly quickly. I work on small canvases outdoors - doing so allows me to rapidly get a complete impression of my subject despite the ever changing light, and also allows me the freedom to explore several different subjects in a day.

The studio is where the larger paintings come together. The sketches, field studies, photos, and notes made on location serve as the jumping off point for larger, more carefully orchestrated works. This is where I revisit ideas that I feel deserve exploration on a larger canvas, and refine ideas that I might feel are sound but that didn't quite come together in the field. I endeavor to make these studio paintings fresh interpretations of the field work that informs them, and to allow them to develop organically. The luxury of time that the studio affords creates a kind of dialogue between me and the painting, allowing me to take it in the direction that it suggests and develop it at its own pace. 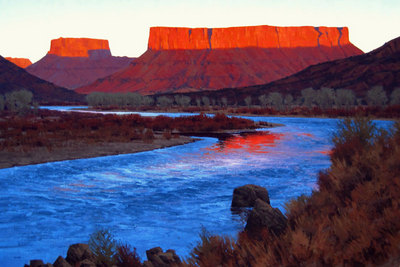