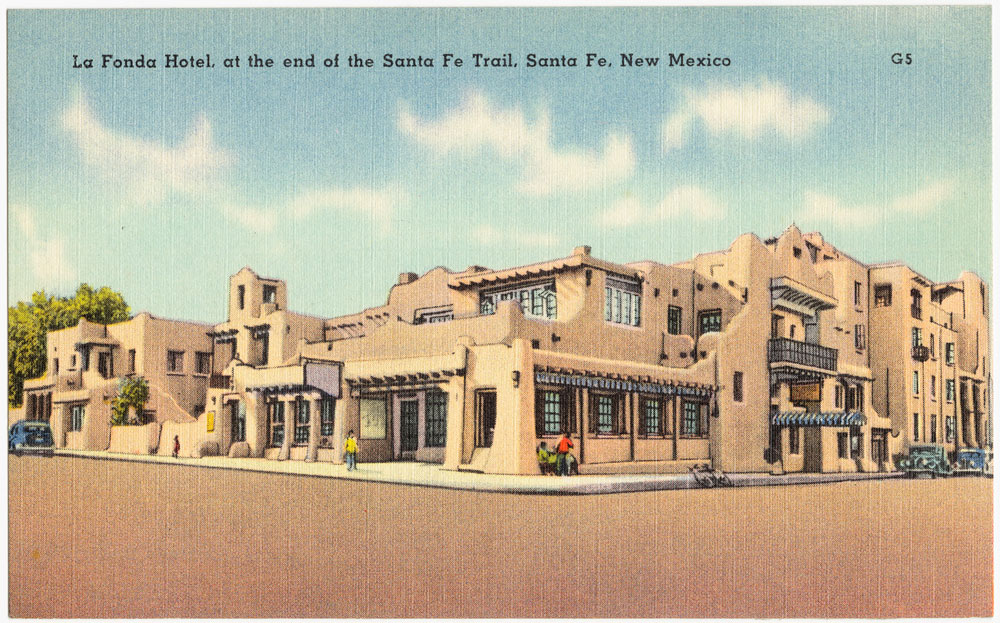 Check-in isn’t required to enjoy the spectacular art collection at La Fonda Hotel in Santa Fe. The historic property on the Plaza celebrates it’s 100th anniversary this year and offers free docent tours Wednesdays through Saturdays at 10:30 AM.

While I strongly recommend taking the tour, if the times don’t work, simply drop by what locals refer to as “Santa Fe’s living room” when it’s convenient and be ready to be amazed.

A pilgrimage site for anyone interested in Indigenous culture, Spanish Colonial history, American History, the Southwest, art or cuisine, visiting La Fonda while in Santa Fe is a “must.”

Within the La Fonda Hotel, here are the “must see” paintings. There are wonderful sculptures and bas relief panels, chandeliers, pottery, baskets, a stunning buffalo robe and various other art objects, this focuses strictly on the paintings. 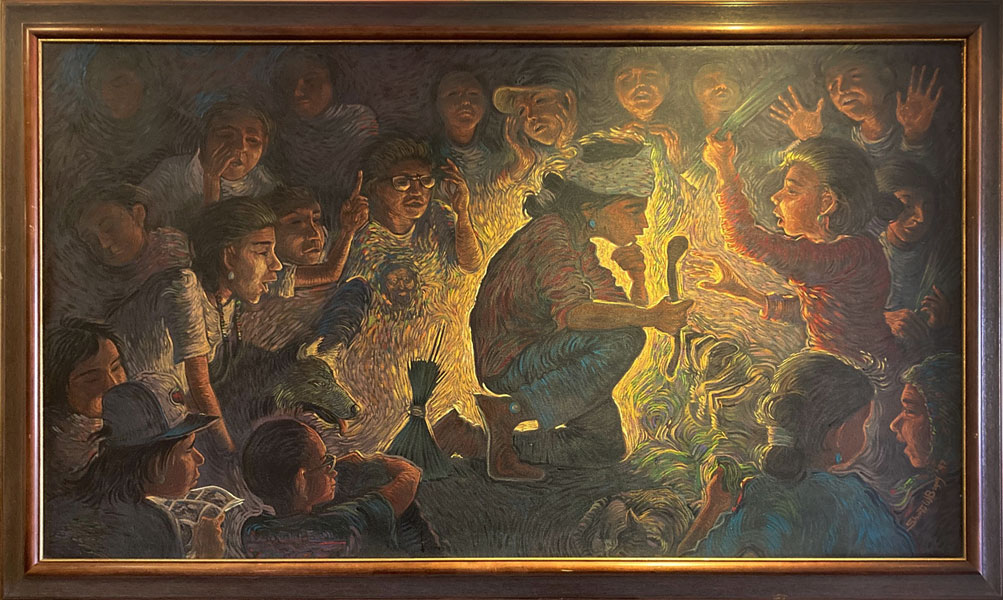 Produced with Begay’s signature squiggly, swirling brushstrokes, an image of children playing the Navajo shoe game appears from a darkened background. The game incorporates the story of how night and day creatures argued over control of the earth’s 24-hour cycle with neither side winning, a lesson in how nature cannot be controlled.

Begay’s dramatic rendering is both dynamic and hushed, a secret and privileged glimpse into a world rarely seen. 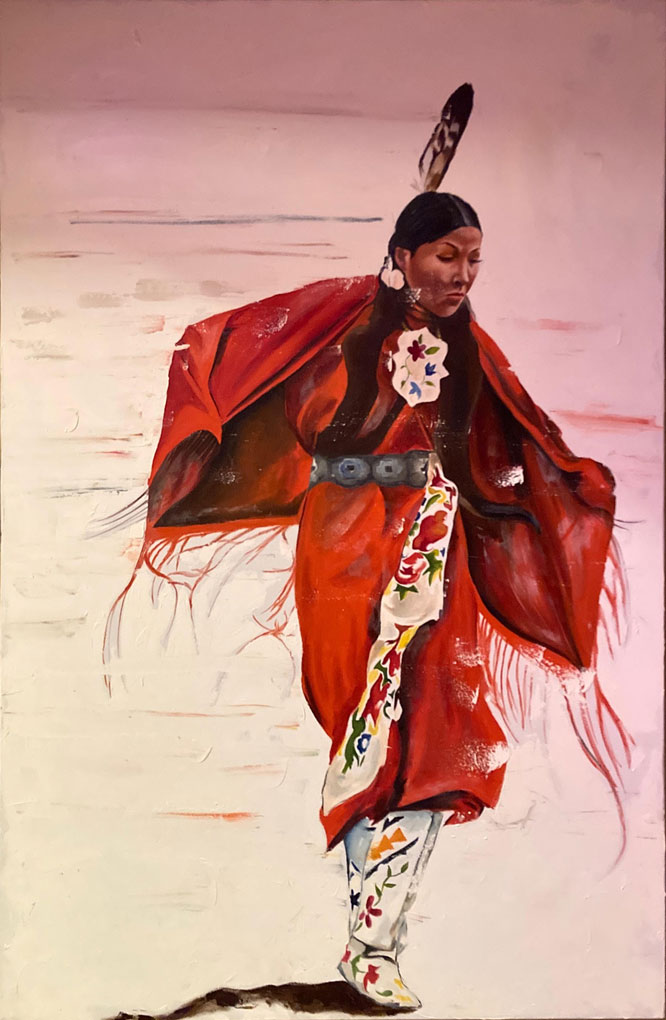 Curfman is one of the most exciting young Native American painters working today. Not yet 30, Curfman has remained in Santa Fe after graduating from the Institute of American Indian Arts. He is learning at the foot of the master, working as a studio assistant to Tony Abeyta in addition to producing his own work.

Curfman’s Vanishing Series deftly captures the energy and colors of Crow Fair as seen in this near life-size painting.

“The idea of disappearance has been a mainstream thought that has been propagated by Edward Curtis, a photographer, who in 1904 produced a collection of photographs titled ‘Vanishing Race,’” Curfman explains in his artist’s statement on the series. “My paintings utilize the notion of vanishing through a stark white background crossing over Native American figures as if the sands of time and space are impermanent to a permanent people. Tradition will not be lost.” 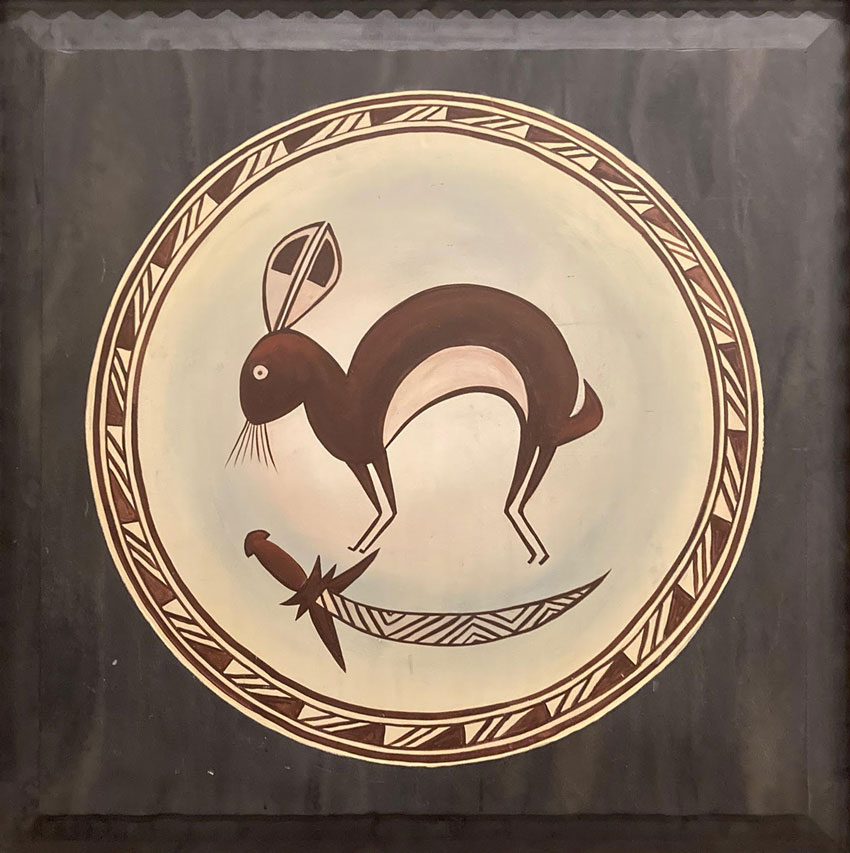 Martinez is best known for painting all the glass panels decorating the hotel’s La Plazuela restaurant. A 56-year employee of La Fonda, the self-taught artist has paintings, skylights and other creations throughout the hotel. His peak achievement takes shape, however, with an extensive series of 53 panels ringing the main ballroom reflecting the Mimbres civilization.

These people were located in southwestern New Mexico and eastern Arizona, thriving between 100 and 1150 A.D. according to wall text at La Fonda. Martinez’ crisp, narrative panels offer a fascinating glimpse into Mimbres beliefs inspiring further investigation into their culture. 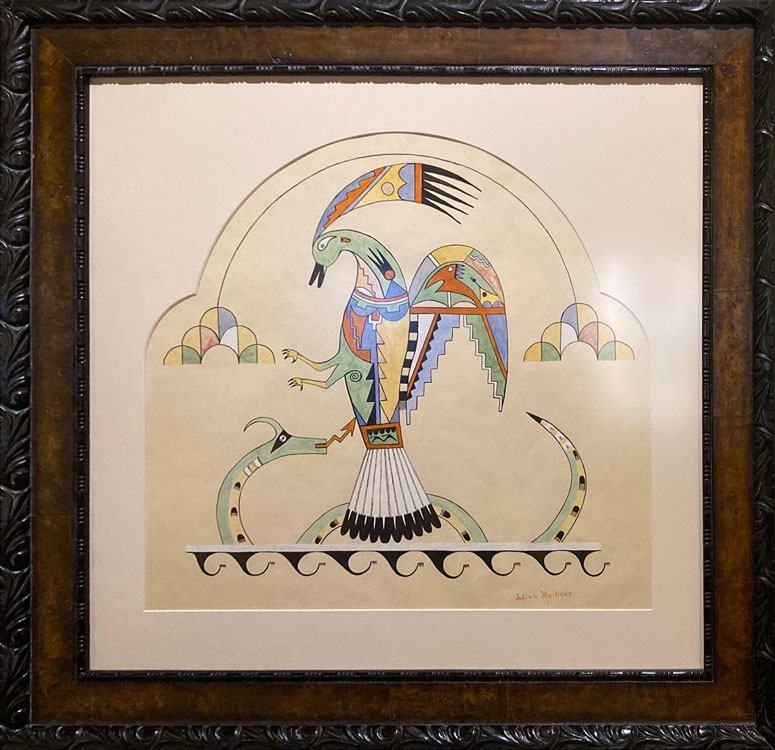 Mr. Maria Martinez’ painting depicts “the horned or plumed serpent, known in the Tewa Pueblo language as Avanyu.” This life-giving creature associated with water can be seen on artwork and painted on the walls throughout La Fonda. It frequently shows up across Pueblo artwork.

Don’t let the painting’s location outside the men’s room in the lobby just off the reception desk fool you. For years, Andrew Wyeth’s masterpiece Christina’s World hung by toilets at the Museum of Modern Art. That was a jab at Wyeth’s realist style from MoMA curators; no such slight exists here.

Julian Martinez has no relation to Ernest Martinez.

It seems like just about everywhere you go in Santa Fe, Tony Abeyta’s artwork is on view. The Museum of Indigenous Arts and Culture, the Wheelwright Museum of the American Indian, Starbucks.

The La Fonda Hotel is no exception. He has a small mural at the property’s entrance from the parking lot and this large painting – about eight feet across – on the main floor.

Abeyta is another IAIA graduate with a stunning exhibition of his and his family’s varied artwork on view through 2022 at the Wheelwright. For artwork from the family at La Fonda, check out the Pablita Abeyta pots inside the vestibule near Tony’s mural at the entrance from the parking lot. 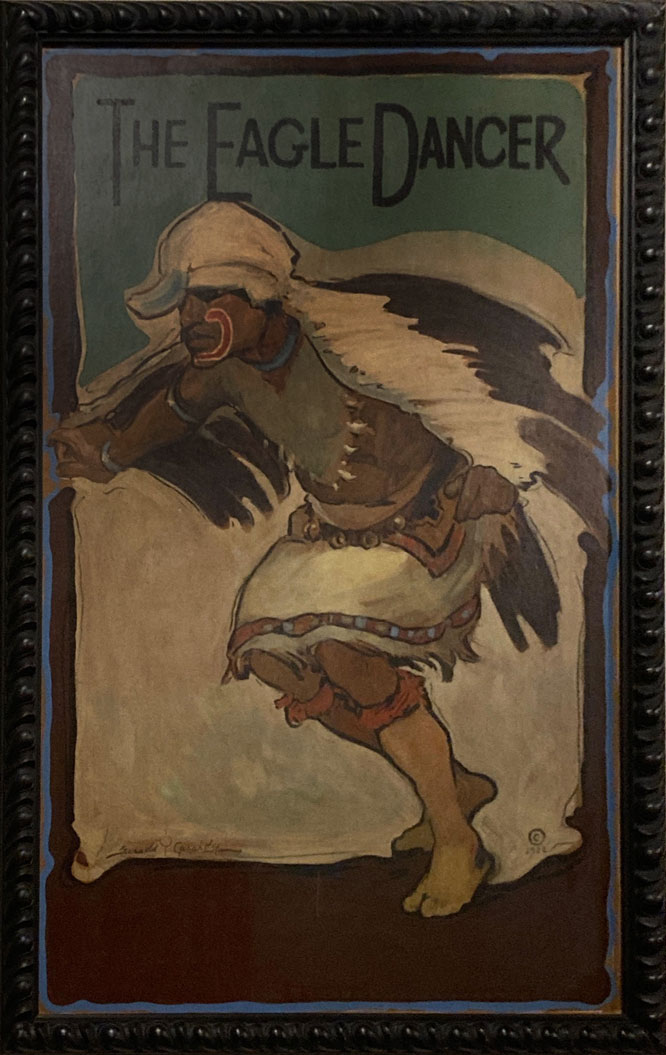 Cassidy was a Midwesterner who came to New Mexico in 1899 looking to ease his suffering from pneumonia in the dry air. Cassidy would go back east for his art education, which included a spell in New York at the Arts Student League – where Georgia O’Keeffe and Jackson Pollock studied to name two – before settling in Santa Fe in 1912.

Prominently displayed throughout the lobby and ground floor at La Fonda are 11 giant promotional paintings Cassidy worked on which were commissioned to help spur tourism to the area. Each features an aspect of New Mexico’s unique cultural heritage which melds Native American, Hispanic and Mexican.

As propaganda items, they weren’t always accurate. One picture depicts an Indigenous man in a full feather headdress. Southwestern tribes didn’t produce headdresses, but by the time of Cassidy’s paintings, the image of Plains Indians was so prominent in the Anglo mindset, he depicted what tourists wanted to see.

This striking, soulful, evocative image of a Pueblo Indian dance ceremony is accurate, but a question must be asked about the ethics or authority of a white artist to paint such a sacred and spiritual ceremony.

It’s not the only instance within La Fonda’s collection where that question comes up. 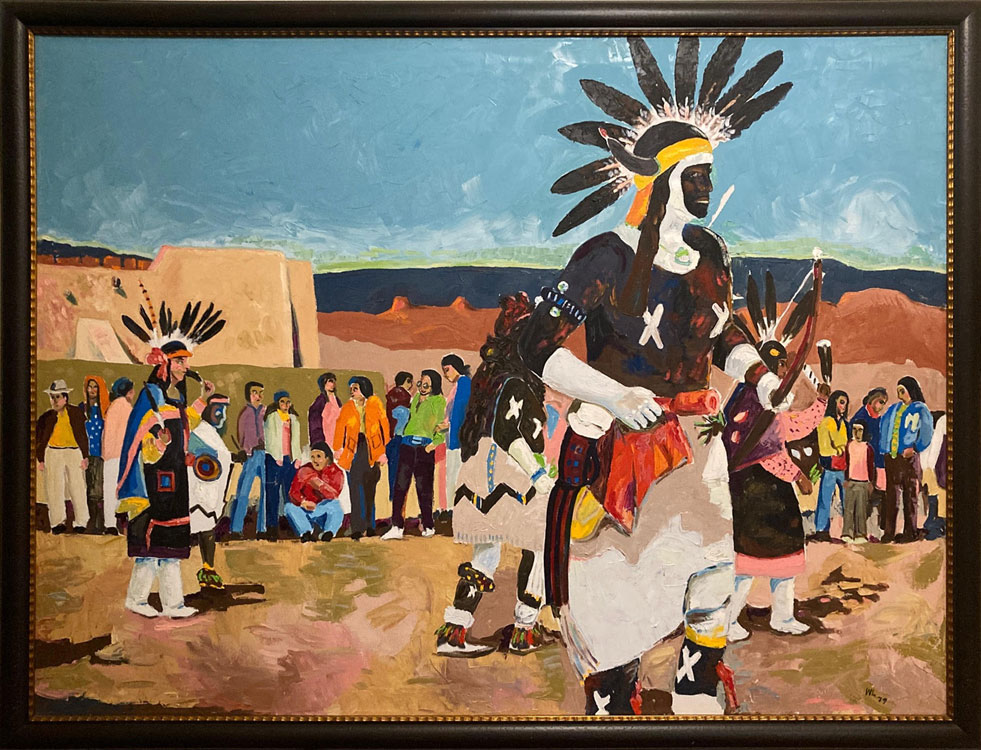 Again, however, what right does a non-Native have in painting sacred Native spiritual ceremonies? Very little according to the Indigenous artists I’ve spoken to about the subject. 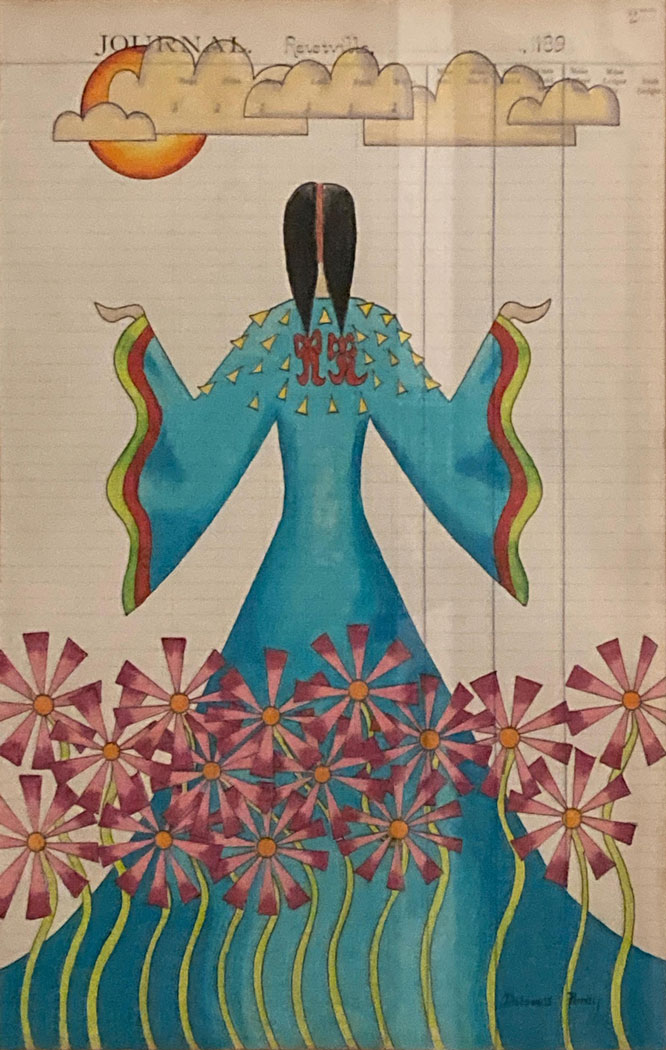 Taking her inspiration from the patterns on Indigenous pottery and textiles, Jordan Craig transfers these designs onto canvas, creating two-dimensional pots and blankets, in a sense.

After a period of study at the Indian Arts Research Center in Santa Fe, Craig produced a series of paintings based on her favorite Native pots from the collection. These paintings remarkably achieve their purpose of introducing the feel of Native American pottery onto canvas.

Craig’s artwork can be seen throughout the hotel. The three examples here are displayed above Ernest Martinez’ Mimbres paintings.