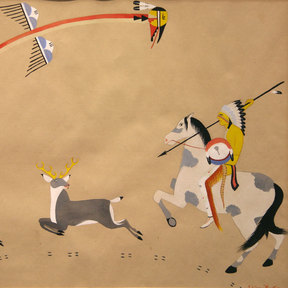 Julian Martinez Pocano, known as Coming of the Spirits, had no formal art training. He is best known for his designs he painted on pottery that his wife, Maria, shaped. He also painted gouache on paper paintings since 1920. He received several commissions for murals, which are shown at the School of American Research in Santa Fe, the Santa Fe Indian School, and the Mesa Verde National Park in Colorado.

Set Descending Direction
per page
My Wish List
Last Added Items
Go to Wish List
You have no items in your wish list.
Site Content Copyright 1996-2022. Permission to reproduce photos and paintings in this online catalog secured by J. Mark Sublette Medicine Man Gallery Inc. All rights reserved. No portion of this online catalog may be reproduced in any manner whatsoever without written or email permission from J. Mark Sublette, Medicine Man Gallery, Inc.