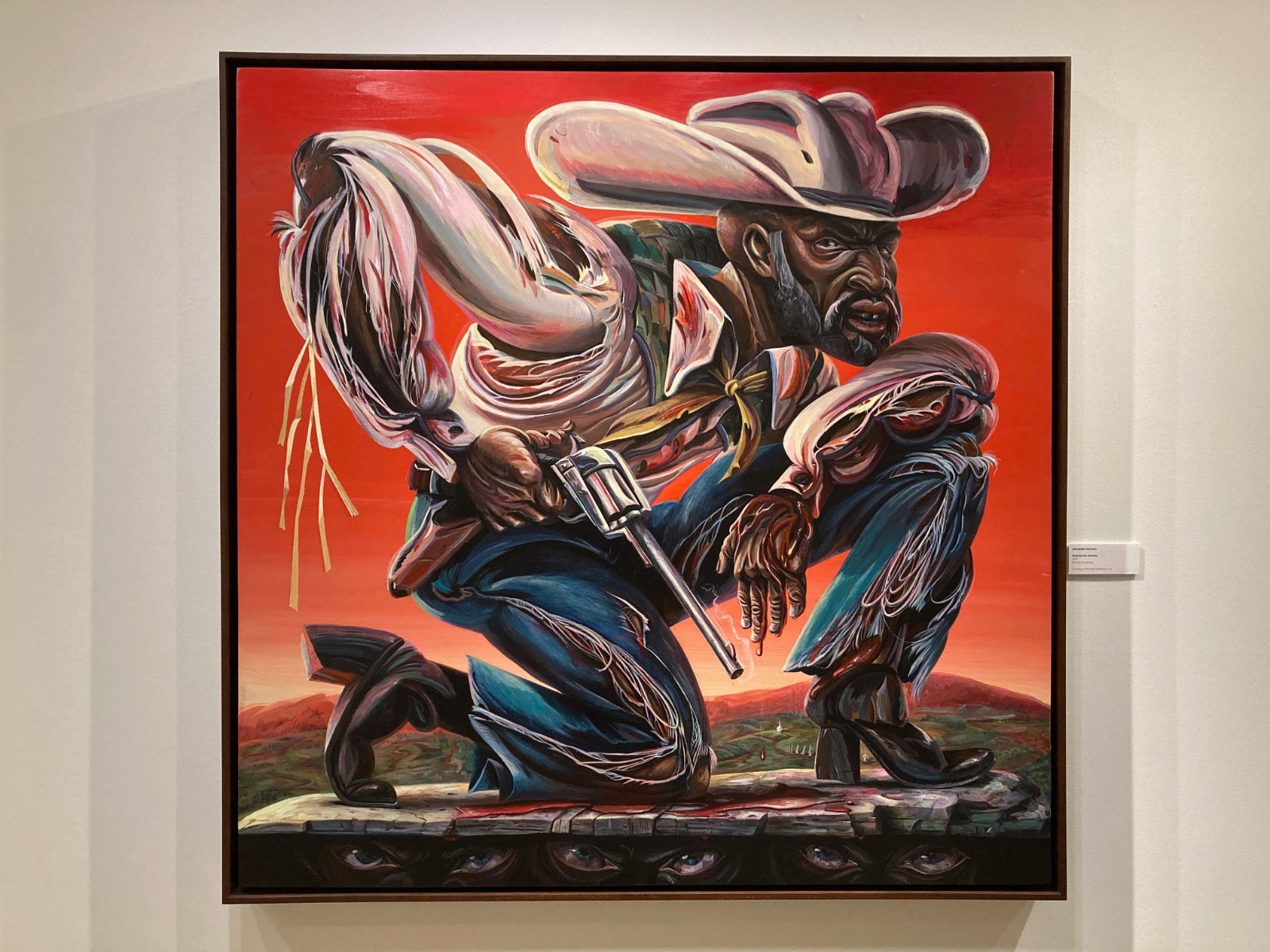 As an arts writer, I view dozens of artwork images every day on social media, in news articles and press releases. Most of them pass my attention after a momentary glance, instantly forgotten. One in 100 stick.

These stop my scroll despite their digital miniature format. I contend a powerful piece of art maintains its impact whether seen on Instagram or hanging in The Met.

That was the case with Beyond the Horizon (2021). Alexander Harrison’s painting of a crouching, sneering, gun-wielding Black cowboy grabbed me by the throat from the pages of “Western Art Collector” magazine. It serves as headliner for the Harwood Museum of Art in Taos, NM’s “Outriders: Legacy of the Black Cowboy” exhibition on view through May 7, 2023.

As extreme fortune would have it, my travels were taking me through Taos in December. I’d never been before, but No. 2 on my “to-do” list, following Taos Pueblo, would be the Hardwood and Harrison’s menacing figure.

The painting did not disappoint.

Forty-seven-and-a-half-inches square, Harrison’s hero – villain, anti-hero? – rests on one knee, filling the picture plane. A trickle of smoke escapes from his gun; a trickle of blood from his hand. His clothes are tattered. You sense his chest would be heaving if this image came to life, and the skill with which it’s painted made me feel it might.

The unnatural, blood-red background further indicates we’re witness to a scene of violence just passed with perhaps more to come. The figure remains on high alert. His pistol cocked, finger on the trigger.

The cowboy – gunfighter, desperado? – has seen action, coming away the worse for wear, not nearly as worse, we imagine, as those he squared off against.

Who would they be?

Are his adversaries the hooded Klansmen leaving the church between his legs? Are they the three sets of eyes peering menacingly out from below the platform the cowboy rests on?

Have we as viewers caught him in the act? The act of what?

His scowl tells us he’d rather we not be there. What have we seen? A murder? An innocent defending himself?

If he asks for our help, will we give it? If we ask for his mercy, will he give it or raise that right hand holding the big iron.

I remember hearing about how CBS optioned a movie based on Kenny Rogers’ “The Gambler” solely from seeing the album cover. This singular image, likewise, could spawn a movie.

Harrison’s Beyond the Horizon brokers in the trope of the Clint Eastwood “Man with No Name,” Marty Robbins cowboy/gunfighter, upending the popular Western folk hero by placing a Black man in the leading role. While this is a fictionalized depiction, “Outriders” reveals the truth – historically buried – that Black men played a prominent role during the “Golden Age of the Cowboy,” roughly 1866 following the Civil War until 1886.

It is believed African Americans represented roughly a quarter of all cowboys during this period. Mexicans and Hispanic vaqueros accounted for even more, perhaps a third. That means white cowboys were the minority. They didn’t become the majority until Hollywood got involved. How many Black men have you ever seen John Wayne or Gene Autry riding alongside?

“Outriders” displays a number of historic photographs showing Black cowboys as proof for anyone who might be skeptical. The irregularity with which similar images have been portrayed in the mass media, textbooks, documentaries and popular culture render them almost shocking. History as told via white supremacy strikes again.

Included among the pictures are William “Bill” Pickett and Nat Love, wall text informing guests of their significance. Visitors learn that Bass Reeves, the first deputy U.S. marshal west of the Mississippi River is considered by many to have inspired “The Lone Ranger.” Imagine a Black man starring as America’s favorite hero on TV throughout the 1950s.

The Hardwood demonstrates how, at it’s best, an art museum also doubles as history museum.

“Outriders” additionally shares pictures and stories of contemporary Black cowboys, African Americans carrying on the horse riding, cowpunching, rodeo traditions of their forefathers, further jumbling what we think we know about this mythic, iconic, American legacy.

Until you see the exhibition for yourself, I’ll leave you with this passage from Margaret Washington’s “African American History and the Frontier,” as recited in the museum’s informational trifold for the exhibition, Washington explaining the motivation for ex-slaves and their descendants to head West: “For African Americans, the frontier could mean autonomy and liberation, not because of the presence of American democracy, institutions, and civilizations, but precisely because of their absence.” 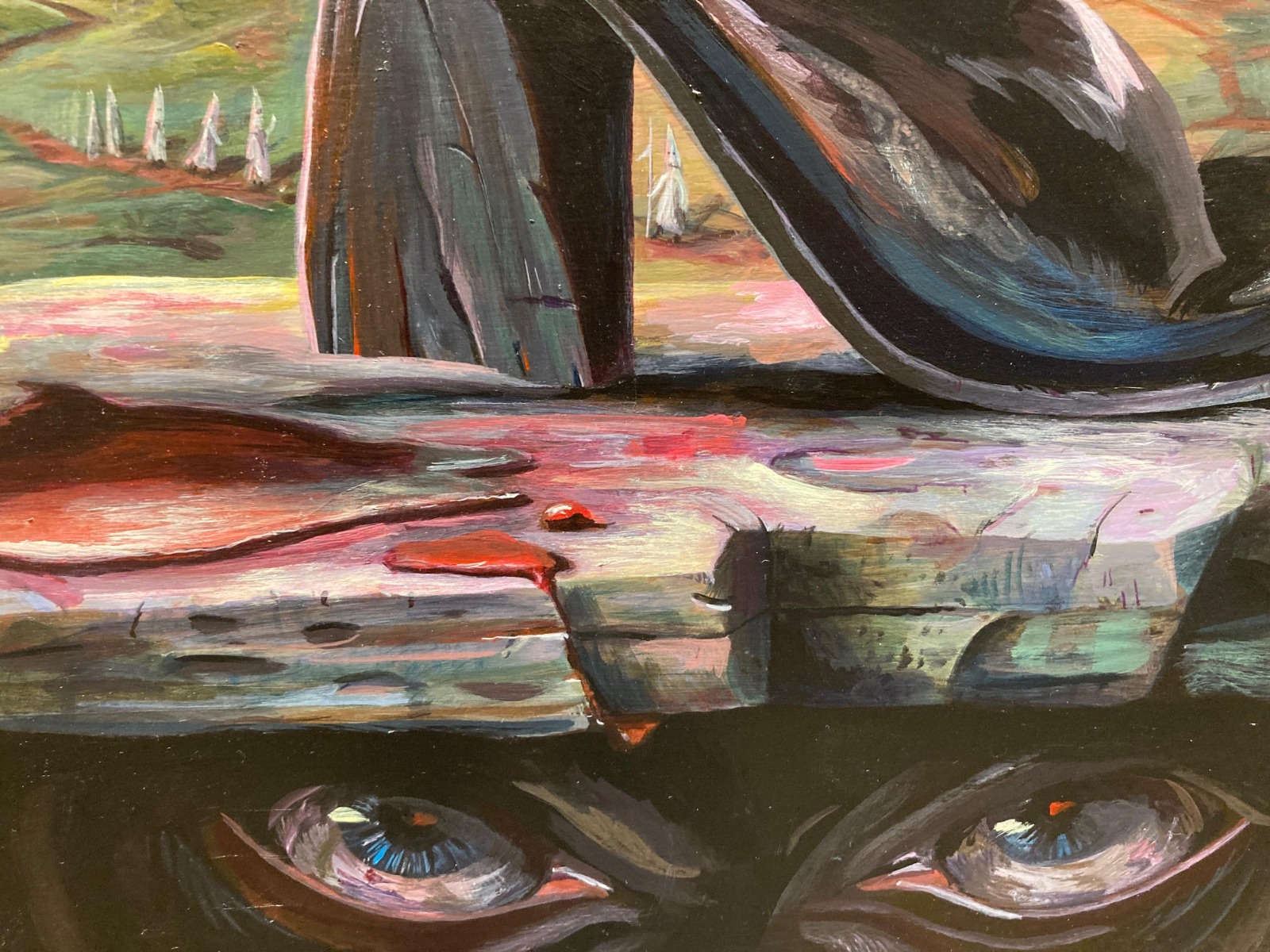