An art exhibition can change history. Every year, from the hundreds of exhibitions hosted by museums and galleries around the nation, one – maybe two – deeply alter common perceptions not merely of art history, but American history. Our culture. Our civilization. Where we came from and how we got here.

“Creating the American West Through Art,” on view now at the Frist Art Museum in Nashville, Tennessee through June 27, is not one of those exhibitions. But it was influenced by one that was.

“Hearts of Our People: Native Women Artists” traveled the nation from 2019 through early 2021. It was the first major museum exhibition to focus exclusively on female indigenous artists. It was the first to mention those female artists by name where possible.

Furthermore, the exhibition was developed through a unique and collaborative process that brought 21 native and non-native voices together to make sure the story was told accurately. The opportunity to show this work, on this stage, had never come before; there was no telling when – or if – it would ever happen again.

“Hearts of Our People” exceeded all expectations. It proved wildly popular with audiences and critics alike, affecting everyone who saw it.

Katie Delmez not only saw the show, she curated the presentation when it was hosted by the First Art Museum.

Her experiences with “Hearts of Our People” was put into practice during curation of “Creating the American West Through Art.”

“All that we learned through ‘Hearts of Our People’ completely shifted the way we think about American History–we’re forever changed,” Delmez said. “When I started looking at the checklist for (Creating the American West) of course it was through a lens of ‘Hearts of Our People’ and, obviously, seeing that 60 maybe 70% of the works feature indigenous people – and all of the lands – and all of them are made by white men, with the exception of one painting made by a white woman, we knew that we needed to make sure we were taking a critical perspective when it came to the interpretation of the works.” 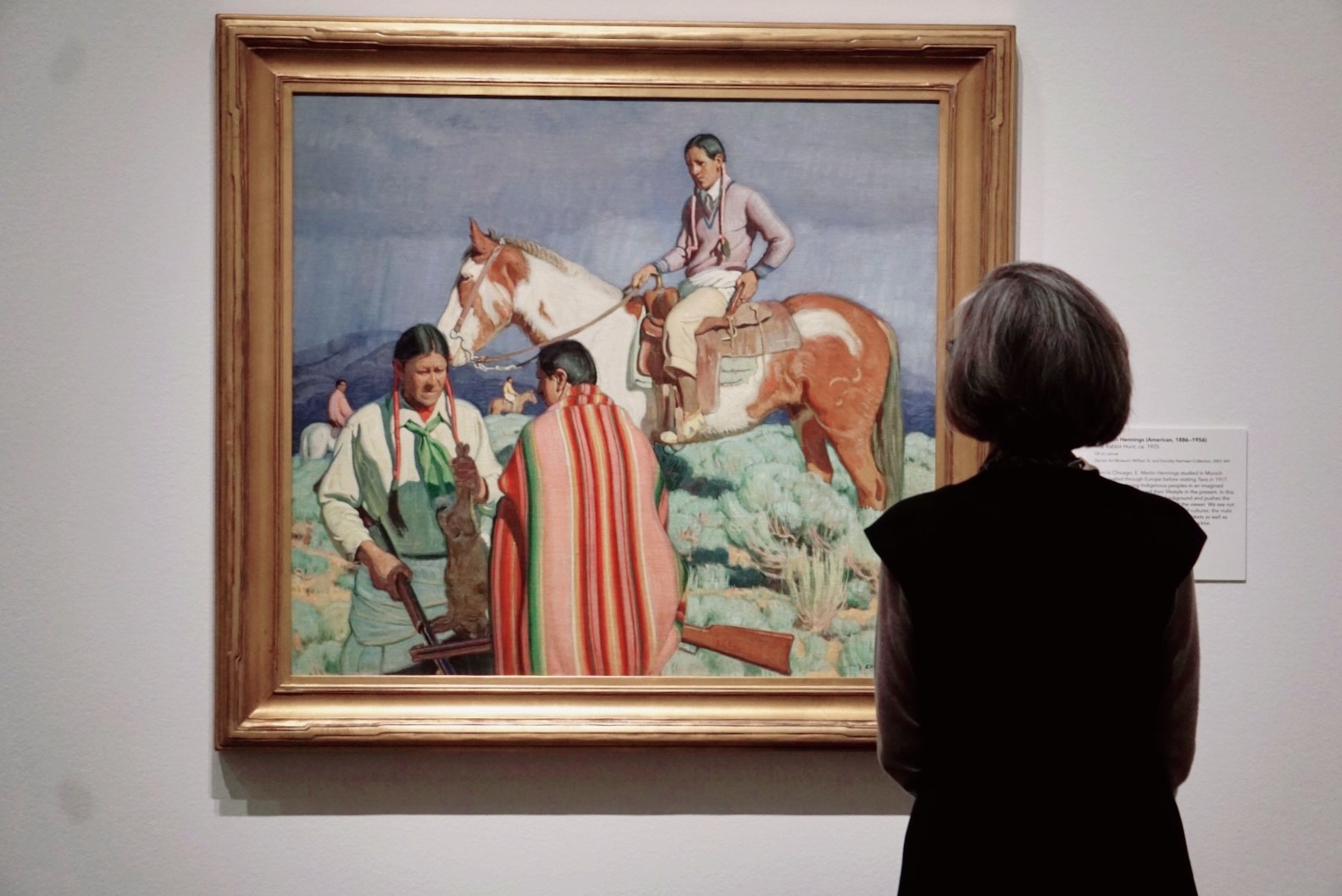 Delmez worked with the Frist’s education team, as well as artists represented in “Hearts of Our People” and local advocates, to make sure that indigenous voices were included. Those perspectives were featured in written wall labels placed throughout the show responding to the various works from their perspective.

“The physical space those labels take up isn’t much, but it’s such a huge statement,” Delmez remembers museum director Susan Edwards telling her.

In addition to the wall text, an extensive timeline focused on significant moments in indigenous history in the West has been added including data tracking native populations pre- and post-contact with Europeans. An interactive app was designed to deconstruct myths surrounding the American West – such as that all cowboys were white men when, in fact, a quarter were Black. Gender roles were examined to further shine a light on untold stories not represented by artworks on display.

One gallery has been devoted to indigenous loss. This can be found in the section looking at nostalgia and romanticization of American West. Here, visitors will find more somber images of Native Americans. It’s a space for reflection. Text panels draw attention to abuses.

None of which need take away from the unquestionable beauty and artistic genius of the work on view., but a subtext exists than can no longer conscionably be ignored. 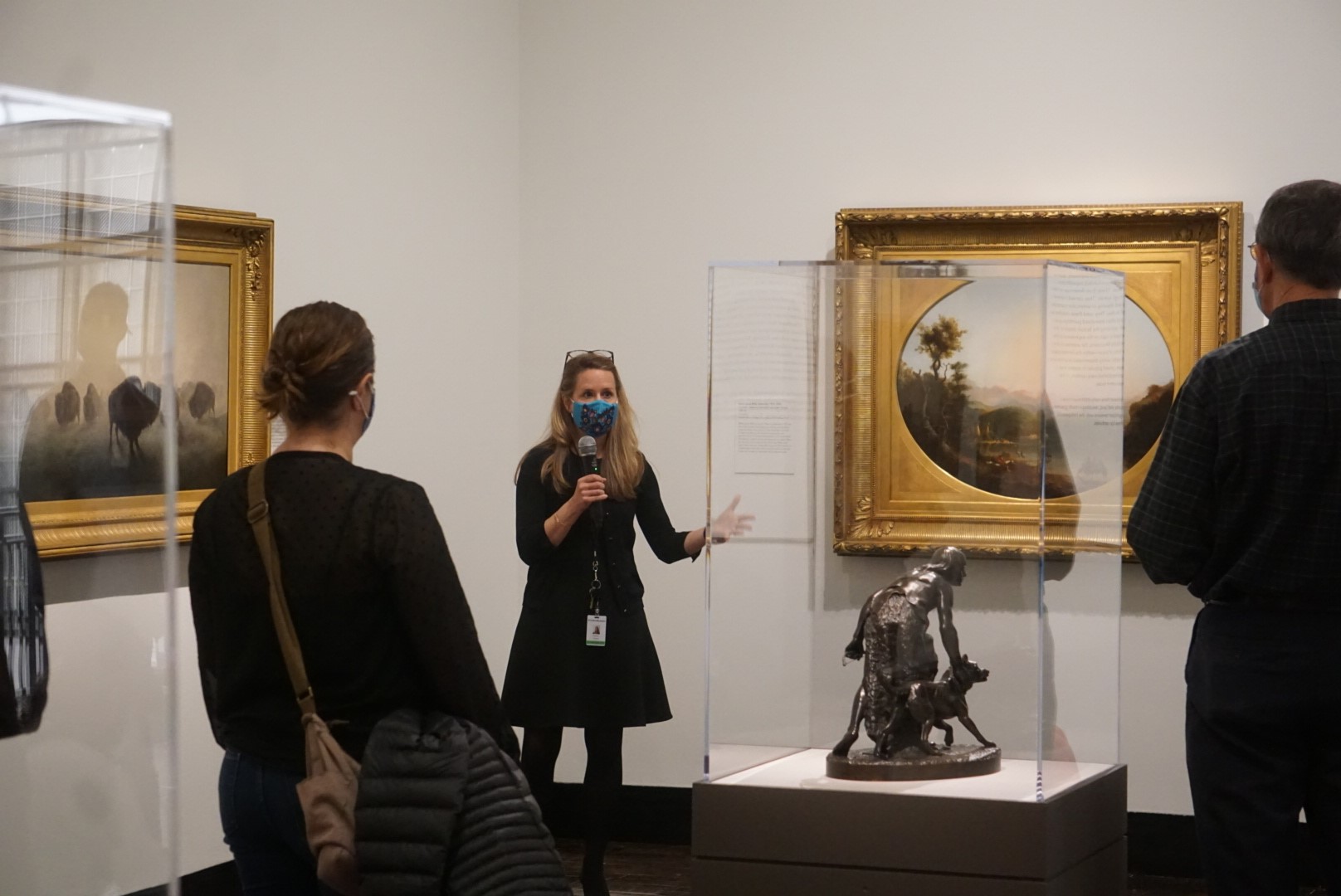 The exhibition, which was scheduled prior to “Hearts of Our People” going on view in Nashville, comes from the exceptional collection of the Petrie Institute of Western American Art at the Denver Art Museum. With that institution undergoing a multi-year renovation and many of its galleries closed and works off-view, DAM put this exhibition together in order to share a small piece of its wonderful holdings.

The exhibition was intended to travel widely, a plan ruined by COVID-19. The Frist will be the only location the show is seen at as DAM completes its renovations later in the summer of 2021 and needs the artworks back for its own display.

“On the one hand, it’s a beautiful exhibition, beautiful paintings, beautiful sculptures; it’s almost a survey of American art, the first work was made in 1822, the latest was a Maynard Dixon in 1946, you can really trace the evolution of American art through these works,” Delmez said. “On the other hand, you can really look at these works and see how powerful art and visuals can be at promoting ideology and, in this case, one we’re increasingly thinking about more critically. It really speaks to the power of art, whether it’s subliminal messaging or more outright propaganda, there’s always some form of messaging happening.”

One surprise to be found in “Creating the American West Through Art” is a portrait of an indigenous woman by Robert Henri. Henri is a legendary early 20th century American painter.

“This one really stands out in my mind because of the colors,” Delmez said. “We think of Henri and the works he did in New York and Philadelphia as very dark. The colors and the light you see in this piece are so dramatically different.”

In researching the exhibition, Delmez learned Henri was influential in establishing Santa Fe as an art center.

All of these artists were hugely influential – intentionally or not – in bringing the ancestors of European colonizers West in the middle and late 19th century and into the 20th. It was those “settlers” – along with the government and army which backed them – who wrought the countless tragedies on indigenous populations which continue to reverberate today.

The artists can’t be held responsible for that.

What they are responsible for is creating a vision so powerful, once established, it has never let go in the American psyche.

“That sense of adventure and freedom and independence that many of the works of art evoke, the artists played a really significant role in creating that entire mythology of the West,” Delmez said.