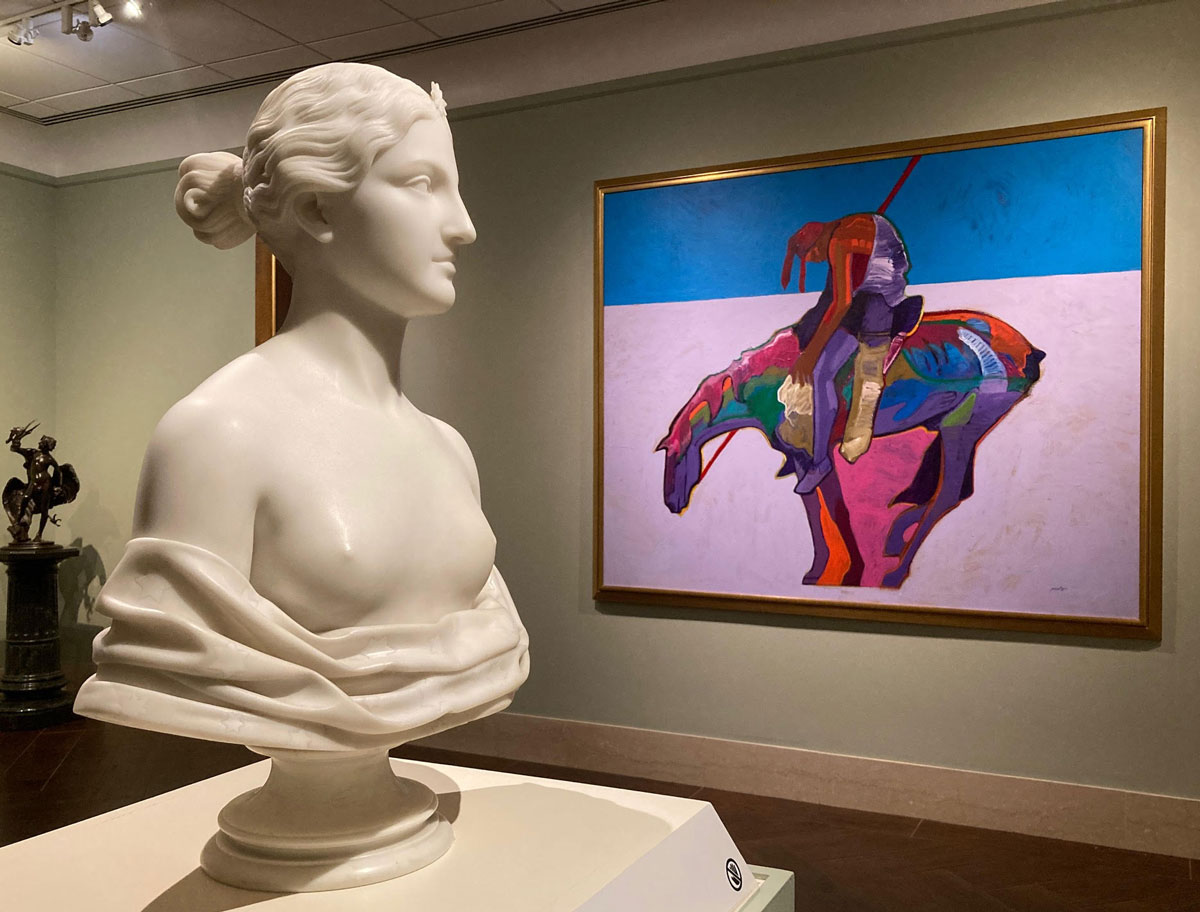 No other word better describes my reaction upon seeing John Nieto’s (Mescalero Apache; 1936-2018) Not Necessarily the End of the Trail (After Fraser) (1991) at the Museum of Fine Arts, St. Petersburg (Florida).

I’d even seen an image of the giant painting hung among the museum’s American galleries on social media before visiting and finding it in person was still jarring.

Any piece of contemporary Native American art displayed in a mainstream art museum is rare. Nieto’s work was the only one I saw on view during my time at the MFA St. Pete. One being one more than I saw on visits this summer to the Cummer Museum of Art and Gardens in Jacksonville, the Milwaukee Art Museum, the High Museum of Art in Atlanta or the Hirshhorn Museum in Washington, D.C. – all outstanding institutions.

How strange that images of nude goddesses, the French countryside, Arabian traders, Venetian palazzos, portraits of Flemish gentry and English noblemen, shipwrecks – you name it – are more commonplace in mainstream American art museums than images of Native Americans by Native Americans. Most museums have pictures of Indigenous people – one was hung on either side of the Nieto at MFA St. Pete – but those images always come from the hand of a white person.

Even African masks, Mesoamerican figurines and jade objects from across Asia are more regular fixtures among mainstream American art museums than artworks by Native Americans.

When mainstream American art museums do display Native American art, those items are most often found segregated in small galleries among other Native pieces. Typically, items on view are historic.

Nieto’s dynamic, dramatic contemporary painting not only hung inside a mainstream art museum, it was hung prominently at the entrance to the American galleries in “general population.” The rarest of the rarest of the rare. A Tiffany lamp was positioned 10 feet away.

The painting more than held its own, of course. For all the reasons contemporary Native American art is excluded from display in mainstream American art museums, quality is not one of them. The painting’s color, storytelling, composition and emotion surpassed everything around it.

The painting is a loan from the nearby James Museum of Western and Wildlife Art which has an outstanding collection of Native American art including Fritz Scholder, Shonto Begay and Earl Biss paintings along with sculptures and a dazzling assortment of jewelry. Contemporary Native art residing in mainstream art museum’s permanent collections being even rarer than its display.

One prominent recent exception can be seen the Art Institute of Chicago – among the handful of greatest art museums in the world – which reinstalled its American art galleries in spring of 2022, placing a Maria Martinez pot and Kelly Church black ash basket right next to Edward Hopper’s Nighthawks, arguably the most recognizable painting in American art history. Church (Ottawa/Pottawatomi) is a living artist. Bigfoot sightings are more common than a living Native American artist with work on view at a mainstream American art museum among its general American galleries. And the Art Institute owns the piece, purchasing it from Church at Santa Fe Indian Market in 2019.

Museums hold a critical role in America. Through their authority, they signal what is of value. What is good. Take a urinal off the wall, turn it upside down, sign it and put it in a museum and it’s “fine art.”  It becomes precious, important. Similarly, through their dismissal, museums signal what’s insignificant. Not worth our time. Meaningless.

In the vast majority of cases for the vast majority of their existence, that is what mainstream American art museums have been telling visitors about Native Americans. The Museum of Fine Arts, St. Petersburg is saying something completely different and its rarity is jarring. 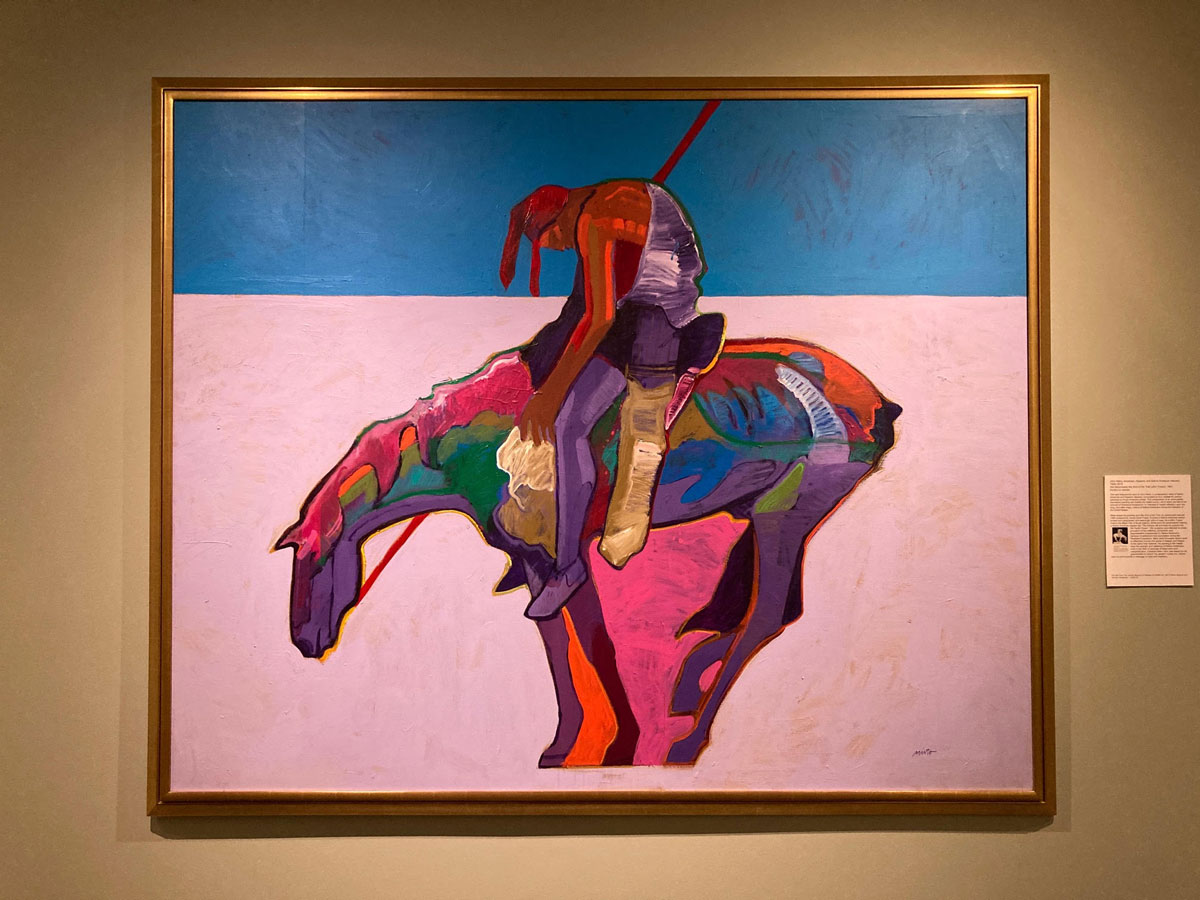 John Nieto, Not Necessarily the End of the Road (After Fraser), 1991| Photo by Chadd Scott