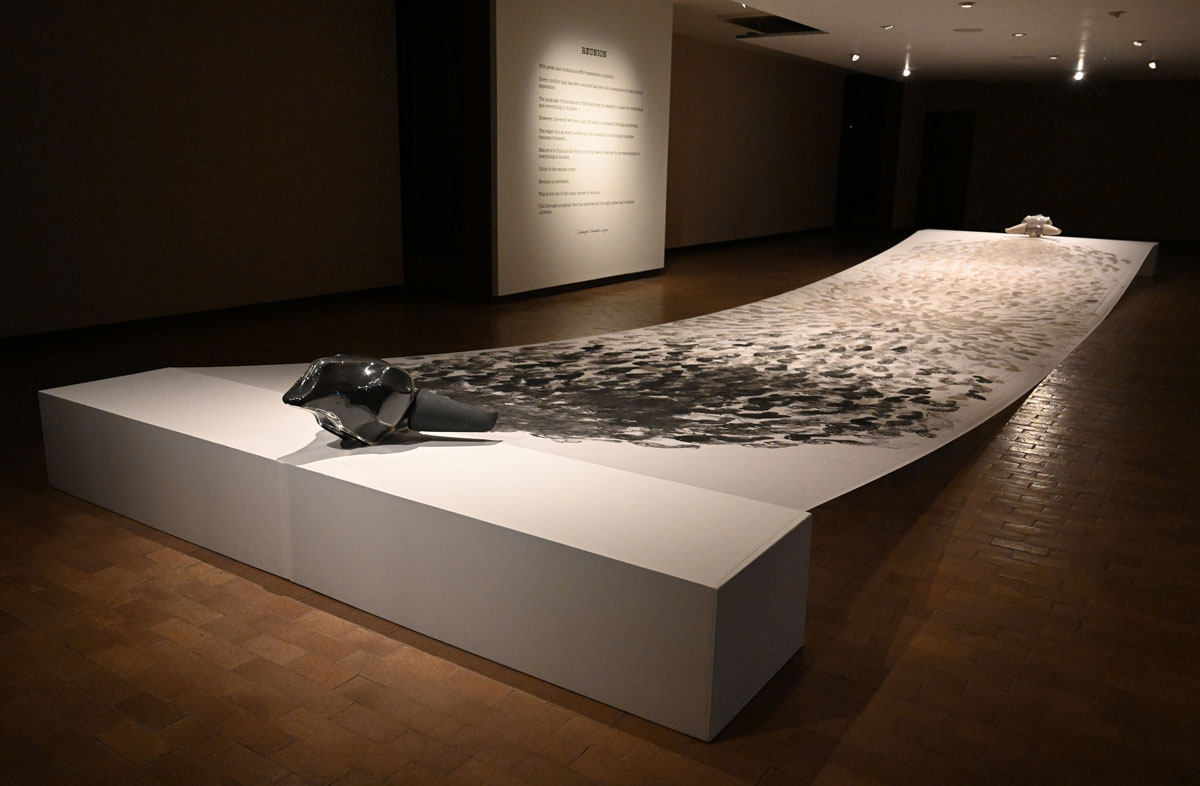 Presently, he has a piece on the High Line in New York City. He’s featured in a group show at the Metropolitan Museum of Art – that’s a big deal. Other group shows include the Berkeley Art Museum in California, the Contemporary Arts Center in New Orleans, the Milwaukee Institute of Art and Design and Remai Modern in Saskatoon, Saskatchewan. A continuing series of exhibitions with Marie Watt can be found in Portland. He has a solo show on view at the Center for Craft in Asheville, N.C.

The New York Times Magazine featured him in an extensive profile in June of this year.

Luger is one of the most in-demand contemporary artists – Indigenous or otherwise – working today.

The best place to see a full scope of Luger’s multidisciplinary creativity, however, is at the Amarillo Museum of Art. Through December 31, 2022, “Cannupa Hanska Luger: Reunion,” (his first name is pronounced, “chuh-NEW-puh”) presents Luger’s newest video series, stunning, room filling installations, ceramics and deep insights shared by the artist about his intentions and methods.

“’Reunion’ mourns the loss of a mighty species and the violence that has built our country while celebrating the bison’s resilience and in turn our own,” Luger’s artist statement for the exhibition reads. “This exhibition empowers Indigenous people and practices as central to global futures and reflects a future space where we once again live in reverence and respect for our more than human kinships.”

Luger is the artist, but the centerpiece of “Reunion” is the bison.

“Buffalo are a symbol of freedom; they represent sustenance and survival for Indigenous people; they have agency and immense power,” Luger’s artist statement continues. “Their might is matched by an innate duty to care for all who encounter them. They give endlessly – even after near extinction, we continue to benefit from their sacrifice. ‘Reunion’ is a space for reflection on our interdependence. We are tied to the land by blood and bone; we belong to each other.”

Transmutation (2022), on view in the show, features a pair of life-sized glass buffalo skulls at either end of a long piece of white fabric Luger walked on after dunking his feet in a combination of bone black and calcium carbonate pigments. Bone-black pigments are created by charring animal bones, a free and nearly limitless resource which could be found scattered across the Great Plains in the late 19th century following the industrial-scale slaughter of bison.

“Bones piled up around rail lines. Hunters and settlers came to a bone-scattered West that reportedly looked like the Valley of Death,’” Luger notes in “Reunion” wall text. “Where bones covered the ground, bounty hunters collected them into massive piles to be transported, processed and incinerated.”

“The historic images of this era document towering pyramids of buffalo skulls…They communicated a warning to Native people, a haunting commitment to our destruction,” Luger states. 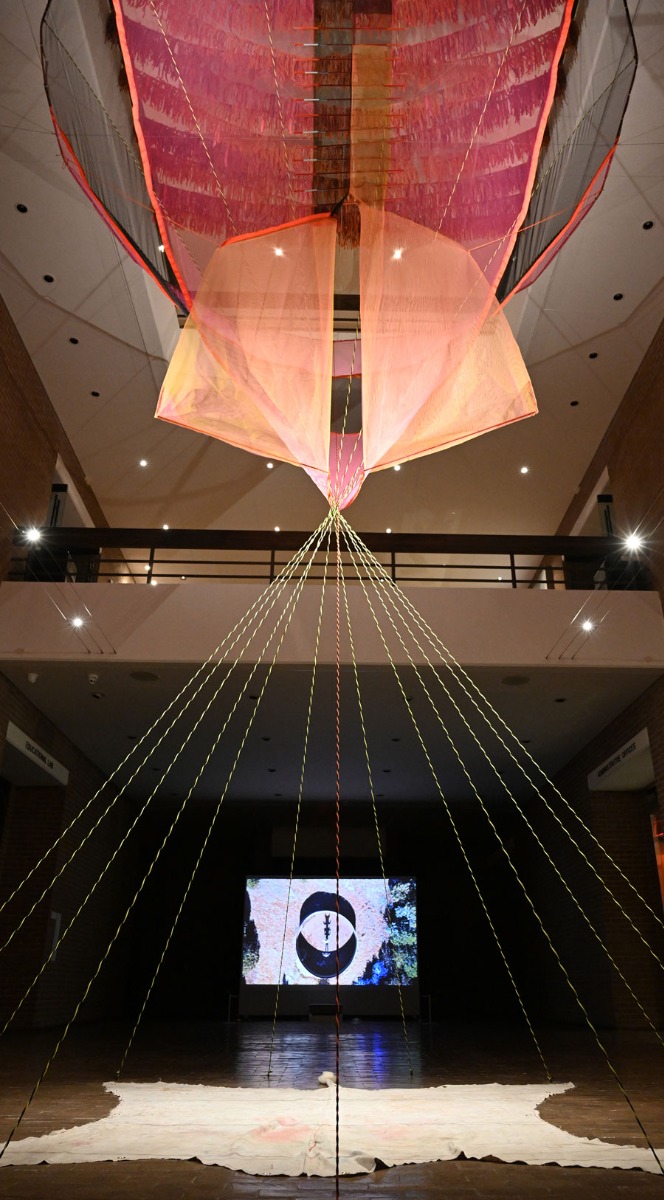 “When the US Army lost in battle against the Plains Tribes, of which I am a descendent, a different type of war was waged against us. With aims to decimate our food supply and way of life, soldiers and settlers orchestrated a full-on massacre of the buffalo,” Luger writes. “General (William Tecumseh) Sherman was a proponent of this plan; in 1869, the Army Navy Journal reported him saying, ‘the quickest way to compel the Indians to settle down to civilized life was to send ten regiments of soldiers to the plains, with orders to shoot buffaloes until they became too scarce to support the redskins.’”

Between 1845 and 1895, an estimated 60 million buffalo were slaughtered. Only a few hundred survived.

Luger continues, “The crash in buffalo population represented not only a dietary impact, but also a loss of spirit, land, and Indigenous autonomy. With the disappearance of the buffalo, we were forced to become more dependent on settler economies and were forced onto reservations. Tribal land was seized, parceled, and fenced.”

Extermination of a species as means of human genocide. Death begets death. America’s capacity to kill staggers the imagination.

“Settlers were easily incentivized to kill buffalo as a way to clear land for settlement. A bounty was put on buffalo – every dead buffalo symbolized a dead Indian,” Luger writes. “Teams of hunters roamed the Plains, killing up to 1000 buffalo in a single day. The liquidation of buffalo not only subjugated the tribes but made space for railroads, towns, and the advent of private property, all of which in turn aided in the buffalo’s further demise.”

And the demise of Luger’s ancestors.

Artwork teaching the lessons of American history too often overlooked in favor of a star-spangled version.

Luger shares a video of himself “walking out” Transmutation on his Instagram page, @cannupahanska. He also shares mesmerizing snippets of Midéegaadi (2022). 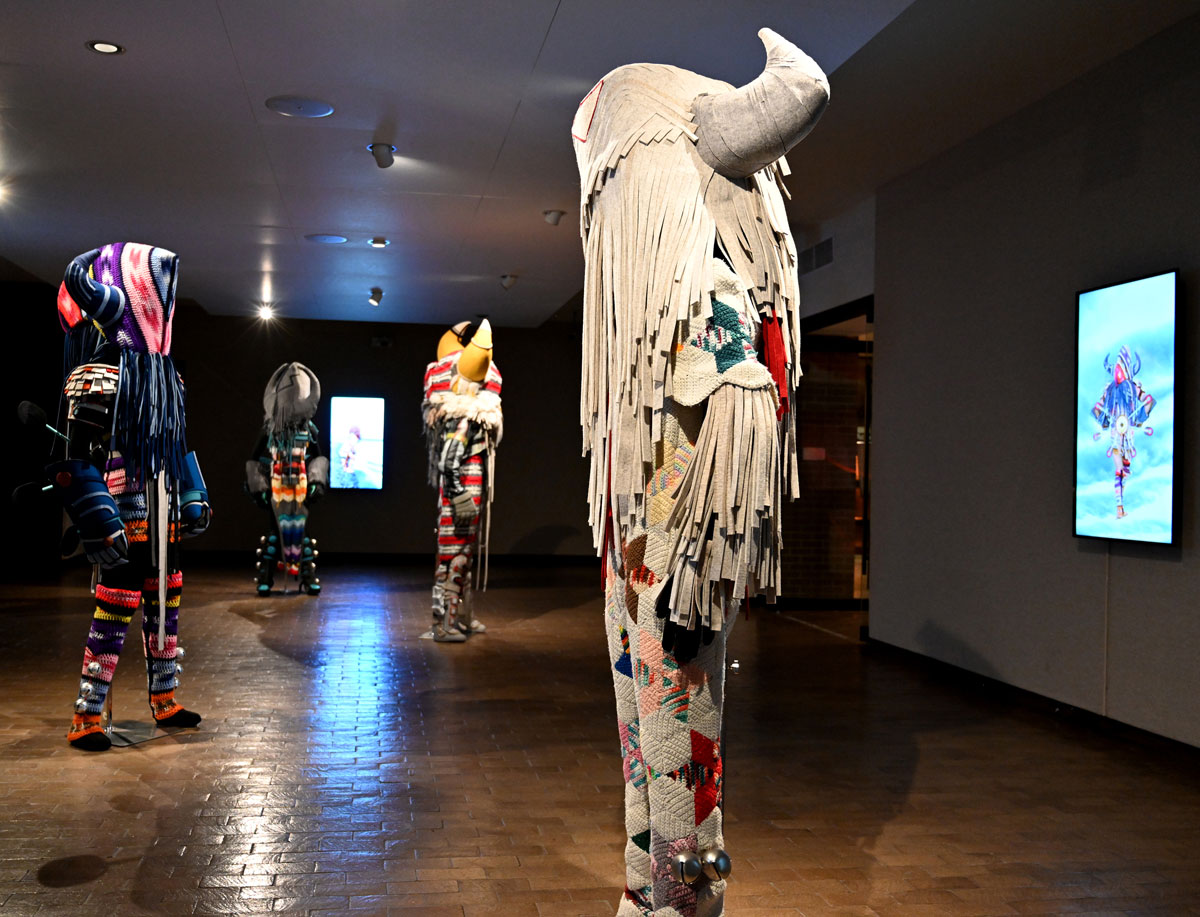 The video series features figures wearing mixed media regalia made of repurposed materials with audio recorded at the Oceti Sakowin Camp near the Standing Rock Sioux Tribe Reservation where the artist was born. The recordings were made during the fall of 2016 as Indigenous water protectors staged a historic and heroic effort to oppose the Dakota Access Pipeline which would threaten their supply of drinking water in the face of heavily armed police and private security forces.

Luger’s work is deep. It is heavy. It is powerful.

It is the kind of art which inspires and admonishes.

He is the rare artist who sets the cultural agenda, who says through his work, “this is important and here’s why.” Who can resurface old stories in fresh and dynamic ways. Who holds a mirror up to American society revealing its ugliness, and potential.

What Instagram cannot do justice to is Uŋziwoslal wašičuta (2021-2022). This site-specific, mixed media installation fills the museum’s three-story atrium.

Walking into the museum on the second floor, guests look down at the artwork’s base standing over the piece. From the first floor, they look toward the ceiling, seeing the tipi form upside down. On the third floor, visitors see the tipi going down into the ground.

The tipi as a lens – as above so below.

The Amarillo Museum of Art is the only place to see “Reunion” as the show will not be traveling, a remarkable feather in the cap for the institution celebrating its 50th anniversary this year.