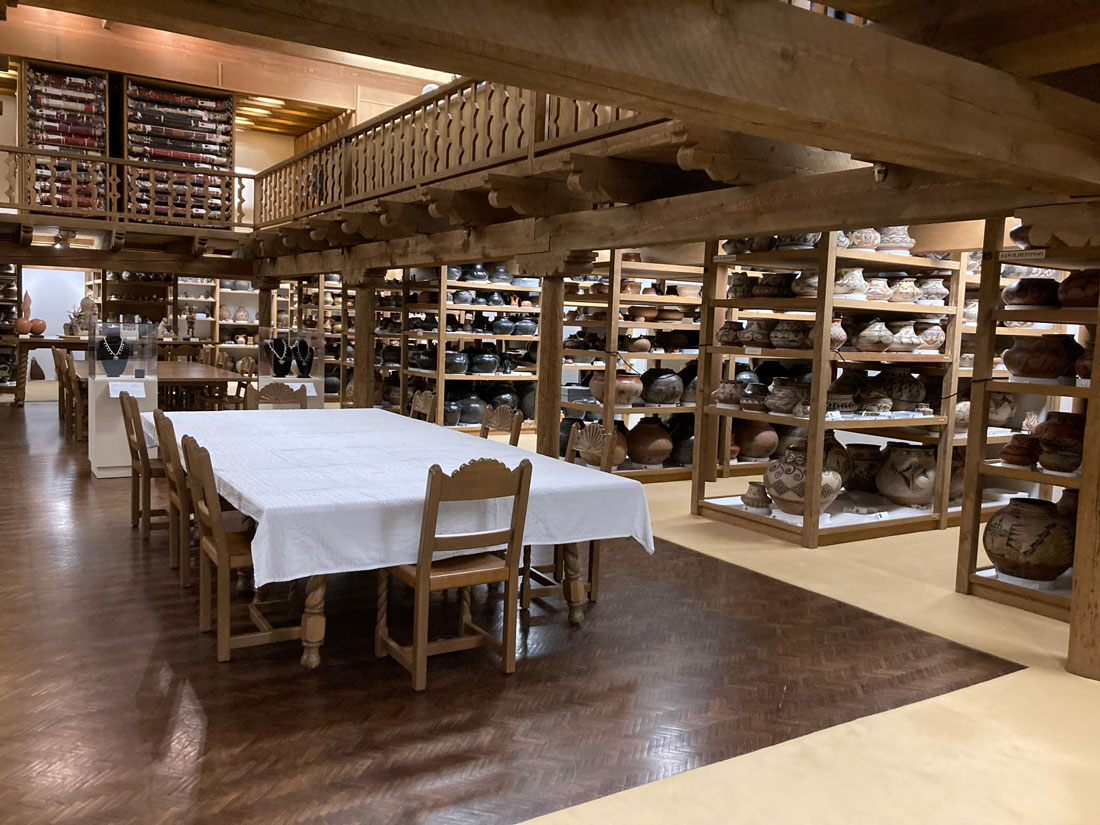 You’ll feel it walking through the vault doors into the pottery collection at the School for Advanced Research in Santa Fe. The sacred. A solemn wave engulfing the body.

This may be the most spiritual art space in the world.

Gathered here are thousands of Indigenous pots from across the Southwest. Pre-contact through contemporary. Some too large to wrap your arms around. Others would fit in the palm of your hand.

Gathered with them are stories.

Listen close and you might hear a drum beat. A jingle dress. Women talking. Children laughing.

If there’s any such thing as a “Night at the Museum” where the objects on view come to life after the last visitor has left and the lights go out, surely it occurs at SAR. It’s more difficult to imagine this community of pottery not dancing and singing through the overnight hours than it is to picture that scene.

A family reunion. An intertribal celebration.

This finest collection of Southwestern Indian pottery in existence vibrates. 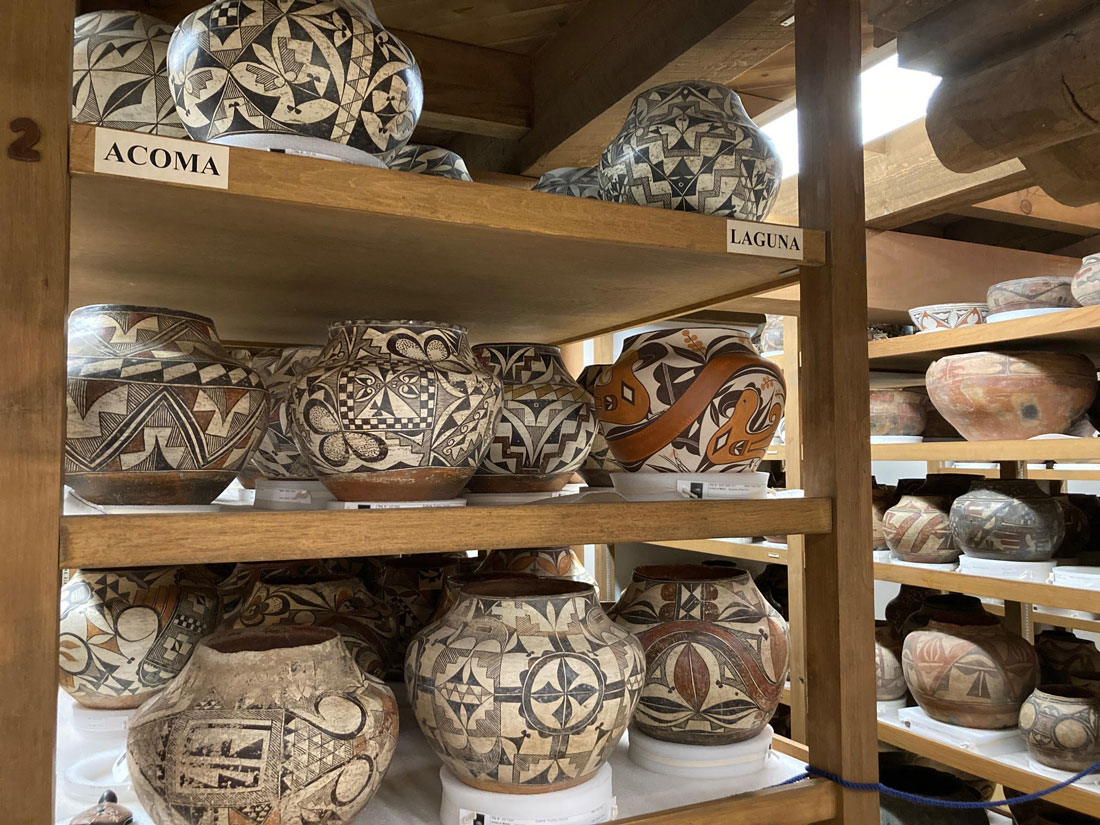 Inside the Pottery Vault

The pottery vault at SAR is literally a vault. A foot-thick steel door the likes of which you’d see in a bank separates the foyer from the collection. There are no windows.

It feels subterranean, as if you and the pots have been returned to the ground, where their journey began and where yours will end.

Astonishingly, no barriers separate visitors from the priceless items. Nothing is behind glass. That makes all the difference. If these objects were in cases, our connection to them would be severed. Their power interrupted.

It’s extraordinary how a pot or a painting comes to life when removed from its container. It’s the difference between seeing a grizzly bear in a zoo and then seeing one in the wild. No bars. When you share space, you share energy. It’s thrilling.

The pottery collection at SAR is out in the open as if being displayed in a home. Stacks upon stacks, rows upon rows. Get close enough to see every crack no matter how fine.

Since SAR only opens to the public one afternoon a week for guided tours – Fridays at 2:00, reservations required – there are also no security guards. No ropes or tape or buzzers. None of the typical devices incorporated by museums to distance guests from the material.

This is an intimate encounter.

You, a docent, a handful of others – maybe – and the pots. 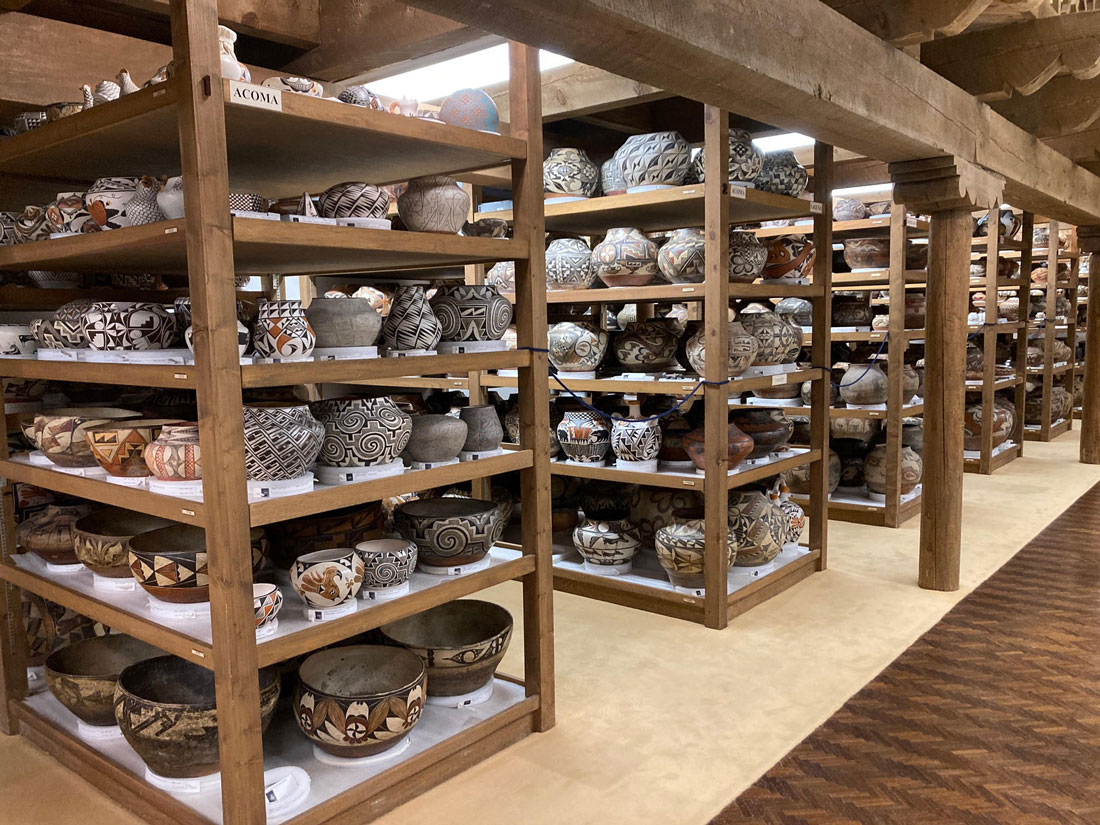 The Pottery Collection at SAR

The pottery collection for what would become the School for Advance Research began in 1922.

“If you put that time into context, it was not so far after Manifest Destiny. It was neck deep in assimilationist policies and salvage ethnography. It was not so far after another pandemic,” Elysia Poon, director of SAR’s Indian Arts Research Center, explains. “Collectors and the Santa Fe elite were concerned about the demise of Pueblo pottery and Pueblo communities and in 1922 in Tesuque Village – not the Pueblo, the village – a pot broke. For them it represented the ‘demise’ of Pueblo pottery and people and they wanted to create the Pueblo Pottery Fund to help protect that.”

If that perspective has the whiff of paternal white savior syndrome, it should, because there was a strong subtext of those motivations in the collection’s origin.

The objects acquired were not comprehensive. They aren’t in all cases the best of the best. Representation among the Pueblos was not equal. Market forces and celebrity motivated choices.

SAR’s pottery collection has four full bays of San Ildefonso pottery. Why? Maria Martinez was at her peak during this period.

Pottery in the collection from the pueblos of Zia, Santa Ana, Jemez, Isleta and Taos combined don’t equal that from San Ildefonso.

The items were also poorly documented by the early collectors.

“I think this is true of basically any museum collection, especially Native American material,” Poon said. “(Object descriptions) would say, ‘It's a Pueblo pot.’”

To this day, Poon and SAR staff work with community members from where the pottery originates attempting to more accurately catalogue the makers and stories.

Whatever the motivations and shortcomings of the collection – which now also includes baskets, jewelry, katsinas, paintings and textiles – it is a marvel. It’s also something of a secret, most of SAR’s work through the decades having been done away from public view.

That figures to change in coming years as an exhibition of Pueblo pottery largely drawn from its collection, “Grounded in Clay,” debuted this summer at the Museum of Indian Arts and Culture next door to SAR. Future stops are planned at the Metropolitan Museum of Art as well as the Museum of Fine Arts, Houston and the Saint Louis Art Museum.

The exhibition is impressive, but its no substitute for the experience of being inside the pottery vault and sharing that space, feeling that energy. 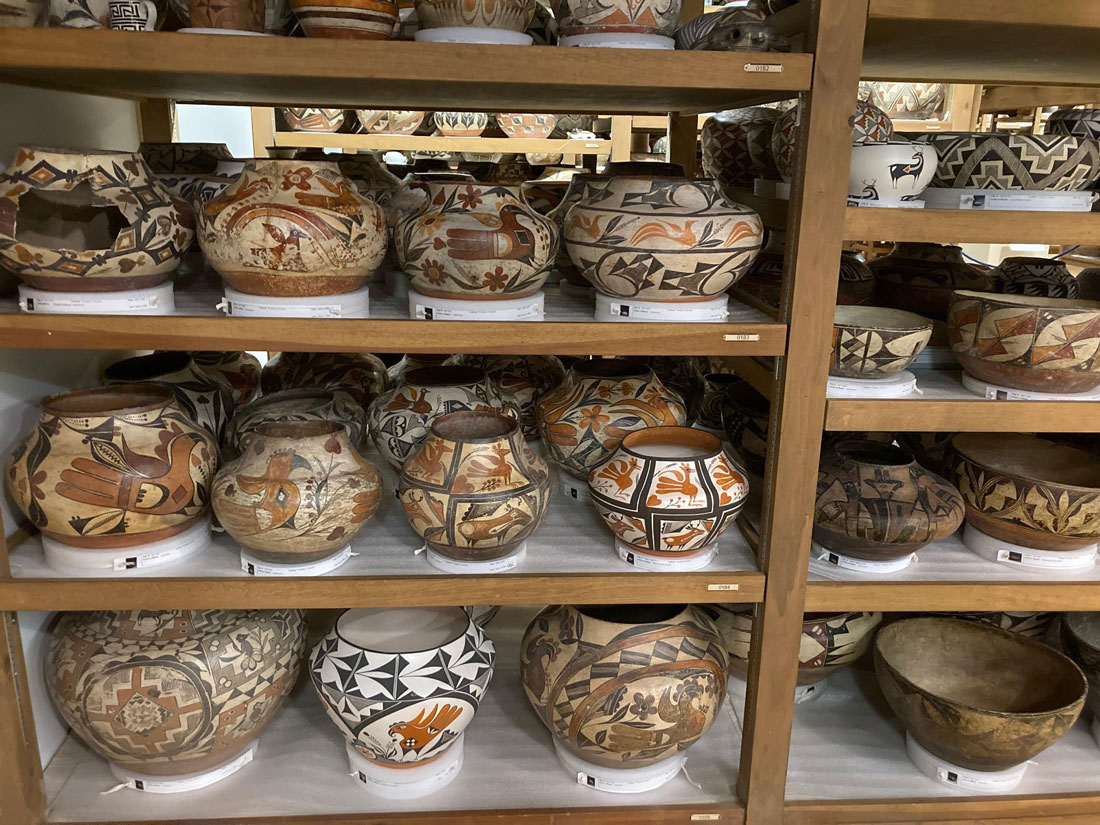