Protecting an Icon of the West, the Majestic Sage Grouse 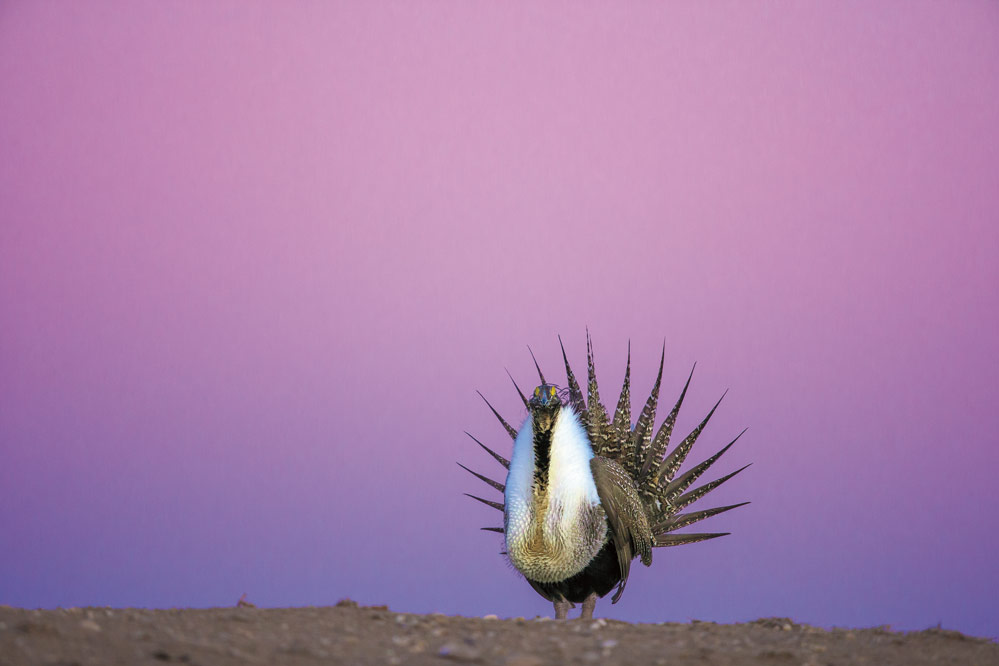 For well over a century, Americans have fought–in the wilderness, in legislatures and in courtrooms–over the role these iconic animals should play in the contemporary West, whether that contemporary West be 1880, 1980 or today.

On one side are the people seeking to extract their personal fortunes from the land, those who want the wild animals pushed out. On the other side, the people who believe the animals have the same right to the land as the people who have since claimed it, if not more.

A recent player in this same tug of war is the sage grouse.

Even if you aren’t specifically familiar with the sage grouse, you are familiar with its story. It’s the same story told by the grizzly, the wolf, the bison and dozens of other species.

Its population has collapsed. Habitat loss due to human encroachment – housing and commercial developments, roads, oil and gas drilling, mining, ranching, industrial agriculture – has crushed the bird’s numbers from 16 million individuals to now less than a half million across 11 western states.

Sage grouse habitat has shrunk from 290 million acres to 173 million acres, with only 10% of the remainder being the pristine sagebrush steppe the bird prefers.

Many grouse advocates have long sought to have the bird protected under the Endangered Species Act. Doing so would establish strict legal restrictions on activity in the bird’s core habitat. However, in every year since 2010, a rider has been attached to the Department of the Interior’s appropriations bill, singling out the sage grouse, prohibiting it from ESA designation, forbidding the U.S. Fish and Wildlife Service from providing additional protection for its habitat. A habitat that also supports more than 350 other species including mule deer, pronghorn, elk and millions of birds.

Optimism for the sage grouse’s survival was recently higher than it is now.

In 2015, after 10 years of bargaining, multiple constituencies – ranchers, conservationists, oil companies, USFWS – agreed on a plan that would keep the bird off the Endangered Species list while also protecting its core habitat. The comprehensive, multi-state program was considered the largest land-conservation effort in U.S. history. 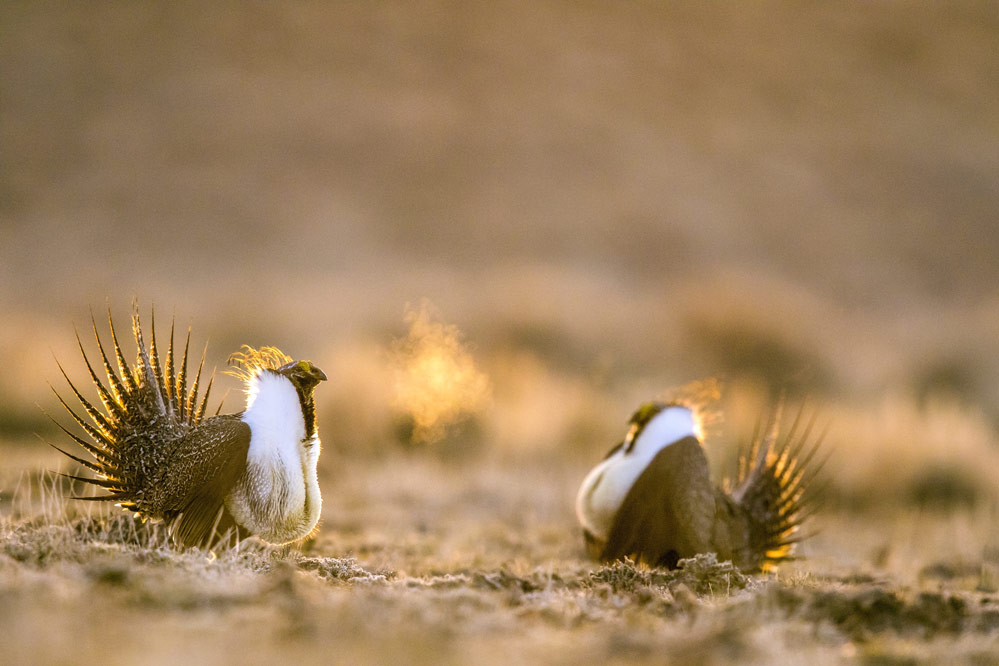 Unlike the strong legal requirements an ESA listing would have provided the bird, this agreement depended upon all parties involved acting in good faith to support its aims. Almost immediately upon taking office, the Trump Administration did not.

More leases for the extraction of oil and gas were sold. The huge upswing in drilling would now also be taking place closer to the bird’s breeding ground. A proposal placing 10 million acres of the bird’s habitat off limits to mining was dumped.

In 2018, the administration continued aggressively leasing more public land to oil and gas companies and in Wyoming, the first areas they chose to lease were the best sage grouse habitats. Thirty-eight percent of the bird’s total population can be found there.

“If the Wyoming population crash(es), then there’s no hope for the bird to recover,” wildlife photographer Noppadol Paothong told “Essential West.” “This bird lived here (for) thousands of years, it has adapted to a harsh environment, it can eat a toxic plant – the sage brush – but what it can’t adapt to is rapid change because it’s really tied to habitat.”

Paothong has spent as much time observing sage grouse as anyone. He spent five years photographing the bird for his coffee table book, “Sage Grouse: Icon of the West,” published in late 2017. The book not only serves as a beautiful photographic record of the sage grouse and the landscapes it inhabits, it’s a natural, cultural and people’s history of the animal, examining how native people, settlers and ranchers have interacted with it. Lewis and Clark documented it on their famous cross-continent voyage.

Paothong’s work is now the subject of an exhibit at the National Museum of Wildlife Art in Jackson, Wyoming on view through May 3, 2021, “Sage Grouse: Icon of the West, Photography by Noppadol Paothong.” The exhibit stems from the book, examining the bird, its elaborate mating dance, the landscape it inhabits and its connection to western people. 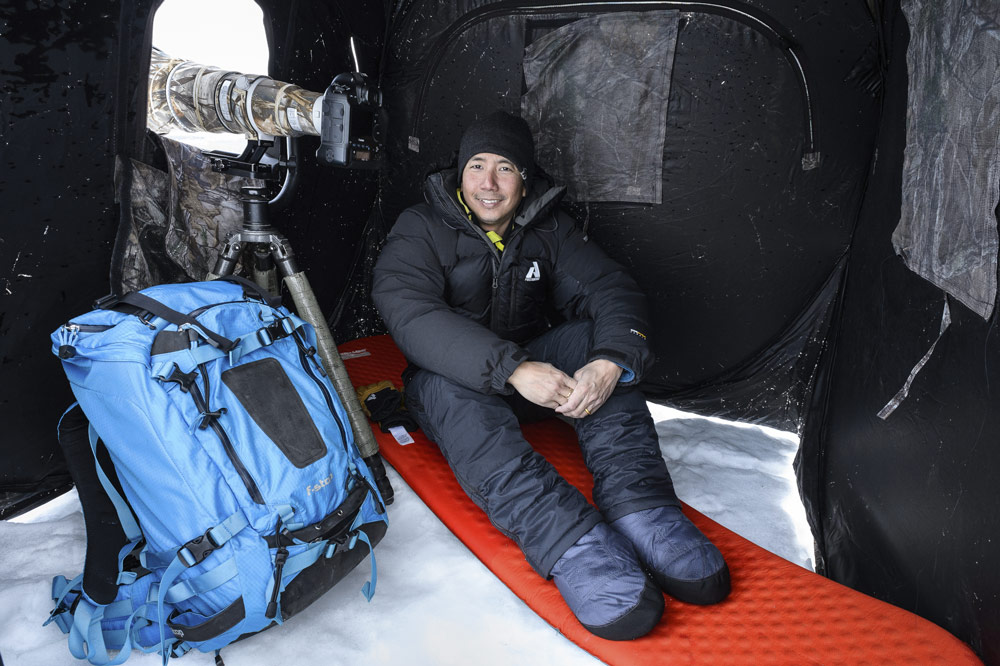 “It’s become symbolic of conservation, but very few people know about this bird and that to me is a problem, a lot of people don’t know what we’re trying to save, so that became my mission,” Paothong said. “Hopefully, my photographs and book become the hook for people to learn about the bird, but not only the bird, the habitat.”

That habitat. The high desert, sagebrush sea which can only be found in the American West. Isolated, yet comforting. Desolate, yet full of life.

For the sage grouse, a bird evolved through the centuries to thrive in this landscape, but no other, habitat equals survival. Males return to the same mating grounds every spring. Exactly the same. Not the same state, not the same county, but the exact same small lek year after year. Leks are open spaces where males perform their courtship displays.

Because the males return to the same leks annually, their numbers are particularly easy to track.

Every year, the numbers drop.

Should the sage grouse vanish, a quintessential feature of western romance perishes with them.

“You can only find them in the places where there are no people,” Paothong said. “(It is) symbolic of this wide-open space of the American West.”

Paothong seems an unlikely advocate for the sage grouse. He came to America from Thailand in 1993 for school, earning a degree in photojournalism.

His story exemplifies the pull of the West. Its ability to captivate regardless of background.

Western wildlife, the grizzly, the wolf, the bison and the sage grouse, they constitute an essential attribute of the West. There is no “West” as we know and love it without its animals.

To lose the animals, including the sage grouse, is to lose the West.

“They’re worth saving,” Paothong said. “We shouldn’t let them go extinct without doing anything about it because we feel they’re not important. They’re unique. They’re inspiring. This bird is worth saving.” 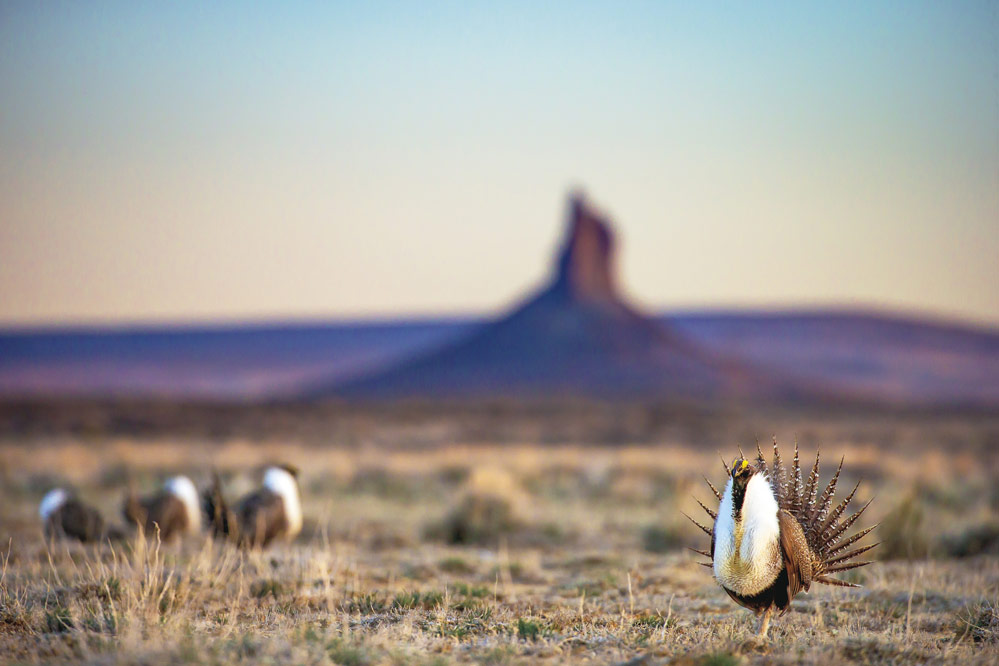