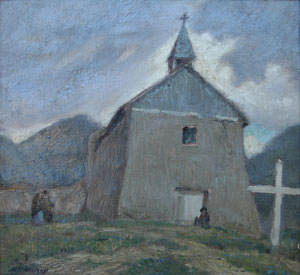 Raised in Danville, Illinois, Wood Woolsey's parents encouraged his artistic pursuits from a young age.  In 1921 Woolsey moved with his parents to Indianapolis where he found work as a commercial artist with the Patterson Engraving Company.  He also took some instruction at the John Herron Art Institute (now the Indianapolis Museum of Art.)

In 1928, Woolsey moved to Taos with his parents and younger sister, joining his brothers Carl and Jean who had already settled there.  Carl, also a self-taught painter, had become intrigued with Taos after viewing an exhibition in Indianapolis of paintings by Walter Ufer, a founding member of the Taos Society of Artists.  At Ufer's invitation, Carl moved to Taos in 1927 and enjoyed almost immediate acclaim.  Jean left for Taos the next year and opened a successful frame shop.  Seeing his brothers' good fortunes, Wood believed that Taos was his opportunity to leave the commercial printing world and teach himself to be a "real" artist.  Charles Woolsey saw the artistic promise in both artists and became their manager, while also assisting in Jean's frame business.

Wood and Carl Woolsey's careers flourished together in Taos.  From 1928 to 1930, they sold seventy-five of the eighty paintings they made.  Both were juried into the Hoosier Salon and the National Academy of Design exhibitions, and exhibited in one or both of these shows each year from 1928 and 1936.  Charles also arranged exhibitions for the brothers in Chicago, Indianapolis, and the Milwaukee Art Institute.  Wood also exhibited at the Phoenix Art Association.

Woolsey always regretted not have more formal training.  Nevertheless, by practicing, observing, and probably working with other artists in Taos, he developed excellent painting skills.  He worked in a traditional, academic realist style but employed complex compositions that show the influence of modernist painting.  His favorite subjects were portraits and genre scenes and was at his best when weaving subtle layers of narrative into his strong compositions.  By all accounts, the personable Wood felt far greater kinship with the Hispanic and Native residents of Taos than did his quieter brother Carl.  His affinity for the local people clearly shows in his genre paintings where the environment give context to the characters, but the people also give life and meaning to the landscape.

Feeling the economic pinch of the Depression, Charles Woolsey decided to move back to Indiana in 1934, perhaps because most of his sons' work was sold in the Midwest.  Wood never married and lived with his parents until their deaths.  Since the children-and especially Wood-seemed always to accede to their father's wishes, he accompanied them back to the Midwest.   Ever searching for the next opportunity, Charles moved the family to Tunkhannock, Pennsylvania in 1939 and then to East Stroudsburg, Pennsylvania during the Second World War.

In the years following the War, Woolsey continued to paint but participated in few exhibitions.  Modernism and abstract expressionism were receiving the attention, and his style of regionalist realism was no longer in demand in the large museum and gallery shows.  From about 1950 on, Wood and Carl shared a studio in East Stroudsburg where he painted mostly portrait commissions.  When Carl died in 1965 (his parents having predeceased him) Wood was on his own for the first time in his life.  He spent the next five years traveling around the West, and died in Laredo, Texas during a flu epidemic in 1970.