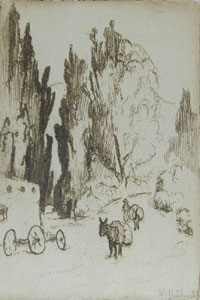 Born in Philadelphia in November of 1893, Will Shuster studied to be an electrical engineer while at the same time pursuing his interest in art. He worked for the Curtis Publishing Company and met someone there who suggested Shuster meet artist William Server. He started to study sketching with Server and soon was spending every spare moment learning from him. But WWI came and Shuster was sent overseas as a First Lieutenant of infantry. While there he was gassed and became very ill. He developed tuberculosis and was given only about a year to live. The other option was to move to a dry place like the southwest and hope to last awhile longer.

So on March 3, 1920 Will arrived in Santa Fe. It was there he met John Sloan and started studying with him which began a life-long friendship between the two. He also met the four other artists who would become with him Los Cinco Pintores (The Five Painters). They were Jozef Bakos, Willard Nash, Fremont Ellis and Walter Mruk. The five young men (all in their twenties) started this group in 1921, which became the foundation of the "modernist" art colony in Santa Fe. They were separated from the Taos painters not only by the rough four-hour ride, but their interest in breaking away from the European traditional art which seemed too limited in its expression.

Their first exhibition was at the Museum of Fine Arts in Santa Fe during December of 1921. An art critic commented, "These men believe in color and are not afraid to use it. Upon entering the galleries, visitors are greeted with a great shout of color that's almost stimulating."

Shuster joined another group which formed in the summer of 1923 that was called New Mexico Painters. They exhibited their work in eastern and mid-western galleries and museums as well as in the west and the Santa Fe Museum of Fine Arts. By June of 1924 four others - John Sloan, Randall Davey, Andrew Dasburg and Theodore Van Soelen had joined the group. They exhibited in 1924 at the Art Institute of Chicago, Los Angeles County Museum and at the San Diego Museum. As the five young men went their artistic ways separately, the Los Cinco Pintores dissolved in 1926.

Perhaps the activity that many people know Will Shuster for is the creation of the burning of Zozobra in 1925. He and the then editor of the Santa Fe newspaper built a giant puppet with the help of Gustave Baumann that was filled with paper soaked in copper sulfate so it would burn quickly. It represented all the gloom in the community with the idea being to usher out all the gloom before the beginning of the fiesta celebration. It was loosely based on the Yaqui Village tradition of burning a scarecrow-type figure which represented Judas. The tradition of Zozobra remains to this day.

Because of the economic slump in the country Shuster was involved in other projects such as doing ornamental iron work and painting a fresco on an outside wall of the Fine Art Museum. He illustrated a frontier biography written by Governor M.A. Otero called, "My Life on the Frontier." He took on a WPA project painting murals at Carlsbad Caverns. Gustave Baumann was the field manager of that project in 1933. Shuster felt that the work done by the WPA and the PWAP was one of the most important factors in several decades to stimulate the public's interest in art. He passed away in 1969 in Santa Fe, New Mexico.