"Awakening Bliss features the widely known and beloved corn poppy (Papaver rhoeas). This bright and lovely vessel reminds us of the marvelous beauty of "disturbances" in our lives to support us in growing and ultimately blooming. It reminds us of the heavy load of living in illusion (buds nodding akin to poppy), while life awaits our awakened blooming - the unfolding of new and growing awareness within our lives. It is hoped to inspire a nudging to lift our heads and hearts high - to open ourselves to continual inner growth in all ways. And, it is hoped to impart an essence of the deep bliss of conscious living - the awakened bliss of Love. That state in which we quite naturally are pointedly and sensitively aware of our entire universe; and where the life of even one single honeybee both matters and affects the entire web of life - it is honored - it is warmly and tenderly cherished.

The vessel includes three honeybees, sculpted using wax from an actual hive on the small PA farm where I  grew up. We are releasing this vessel during National Pollinators Month in honor of the honeybee AND our many cherished and vital pollinators. The botanical name, Papaver rhoeas, means sleep bearing. According to J.C. Cooper in "An Illustrated Encyclopedia of Traditional Symbols," the poppy is symbolic of ignorance, sleep, indifference; and the blood red color depicts the passion of Christ. In Persian literature, the red corn poppy is denoted as a flower of love – the “eternal lover” -  symbolic of people who died for love.

The common poppy is well known for its notable ability to form a long-living seed bank that germinates whenever the soil is eventually disturbed. This was the case in the fields of Europe after WWI and the source of inspiration for the subsequent, famous writing of the Canadian physician, John McCrae’s In Flanders Fields. The poppy buds distinctly nod downward before maturing into a bloom, with most often one bud per stem. The open bloom usually has 4 (though at times 5 or 6) petals; with simple, alternate leaves sometimes whorled; but usually lobed or pinnatifid. The blooms have many stamen which are black or bluish black – typically 16-20 in whorls. Following the spent blooms, the capsules remain erect with a fluted cap. Stems are hairy. Most of this I knew for many, many years, and like so many, I have always cherished seeing the waving, delicate stems of poppies in any garden.

What I gave attention to when beginning to sculpt however, was the poppies’ habit of growth and the symbolic essence of that habit. As the poppy nods its bud downward, it appears as if in slumber. I likened this to our human tendency to do the very same – to nod our heads in sleepiness or unconsciousness – to live while being unaware of our truthful, powerful, Truthful essence. It may also be likened to living with indifference – refusing to stretch upward and SEE the entirety of our world and its infinite web of beauty – believing any of us are actually separate from any other or any element of nature. When we lift our heads from utter slumber we indeed readily see the world is ALWAYS kind and immensely beautiful in a manner words will always defy. And, I appreciate the characteristic of the poppy to be capable of such a long –living seed bank – waiting  often years to be disturbed enough to grow. Is that not the way with humans as well? It is often not until we are deeply disturbed or challenged by some circumstance in our life that we are undeniably nudged to give our full attention to true inner growth. Not unlike the poppy, this can take many years – before something “disturbs the soil” or disturbs our lives, enough to prompt the poppy, and us, to bloom. And once the bloom is over, it is then the poppy remains erect and scatters its seeds to our world – nourishing new blooming around it.

The poppy is sometimes known as a weed, since it flourishes as a weed in grain fields; and it has many characteristics of a hardy weed.  I love it is referred to as a weed – because most weeds simply refuse to stop growing. How lovely if we were able to follow that tenacious lead? I’ve always loved dandelions for this very reason – they simply refuse to stop growing. That “eternal lover” the Persian poets refer to is ever patient – always, patiently in wait, for our awakening to the true Essence of life. The delicate poppy stems remind me of the flexibility we benefit from always remembering to hold in our lives. Being flexible also means being tolerant – we do not expect the nodding poppy bud to hold glorious scarlet blooms while it is still nodding in sleep. With time, it WILL become upright and bloom – and this may take many years. I believe we do well to remember the poppy habits as yet another example of how nature can become such a beautiful compass for our lives. This habit of the poppy also reminds us that we cannot expect others to behave in ways they are not yet aware may be detrimental to themselves and/or others – if they are unconscious beings (nodding poppies in waiting) we cannot expect them to behave consciously if they, in fact, remain unconscious. They are still, for whatever reason, in slumber.

Christian teachings invite us to, “Forgive them, for they know not what they do.” Each of us hold our own unique challenges – each of us carry a past laden with events and experiences that color who we are in the present – each of us will slumber only until we are nudged in the perfect season for us to finally begin to grow upright and ultimately bloom our glorious innate beauty. Having known the depths of slumber ourselves, we can find grace to patiently await the other to awaken with Love. The poppy is an important pollen source for bees. I have long held an ever growing appreciation for the vast gifts of our pollinators and honey bees in particular. Three honey bees are sculpted onto the poppies on the Awakened Bliss vessel – the powerful number of three, that grand triad of Mother, Father, Child - Father, Son, Holy Spirit - beginning, middle, end – the Buddhist three precious jewels, etc. Our honeybees continue to be on a dramatically alarming decline. They are responsible for pollinating more than one-third of all the fruits, nuts, and vegetables we eat daily. Their communities of hives are a lovely blueprint for living in utter community and immense generosity. These extraordinarily intelligent insects are enormous blessings to the balance of our ecosystem and yet we continue to blatantly neglect their care.

Some have written the beehive as symbolic of the church and the honeybee as the messenger between heaven and earth. If this is true, we are certainly failing to heed the call of our sacred messengers. The three honey bees on the vessel were sculpted using wax from a honeycomb on one of the hives from the small farm where I was raised in PA/USA – they are present as our visible reminder of their beautifully awakened, generous presence– and as another invitation for us to more deeply care for them through our daily habits. Awakened Bliss is offered in a limited edition size of 29 (the number of poppies on the vessel). It is hoped to inspire a nudging for each who pause in her presence, to lift their heads and hearts high – open themselves to continual inner growth in all ways. It is hoped to impart an essence of the deep bliss of conscious living – the awakened bliss of Love. That state in which we quite naturally are aware of our entire universe and where the life of even one single honey bee matters and affects the entire web of life – it is honored.

We humans are not intended to remain nodding in bud forever – we are intended to awaken to our true Essence and bloom that glorious, word defying, Awakening Bliss. We rarely if ever actually see the very moment the poppy becomes upright – it is most often a slower process and we do not see the moment it seems to suddenly be upright ready to open and bloom. Once it opens it no longer stands as a single poppy – the single disappears as it becomes one of the many in the field of poppies in diverse stages of opening -  it becomes one with the earth, the air, the observers of the deep joy – there is no beginning or end to the web in which it exists – it is simply pure, beautiful Presense." - Carol Alleman 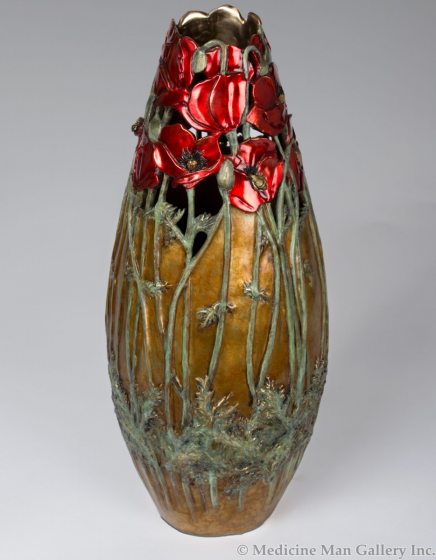