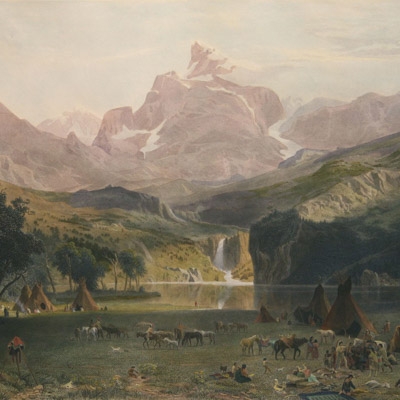 Albert Bierstadt was one of the most prominent and influential American landscape painters of the 19th century.  With his enormous, detailed paintings of the Rocky Mountains and Sierra Nevada, he introduced many Easterners to the grandeur of the American West for the first time.  Although Bierstadt was (and still is) best known for his monumental landscape paintings, he produced a large body of excellent smaller, finished paintings primarily of landscapes and animals.  These works, once again, command some of the highest prices for 19th century American painting.

per page
Set Descending Direction
My Wish List
Last Added Items
Go to Wish List
You have no items in your wish list.
Site Content copyright 1996-2019. Permission to reproduce photos and paintings in this online catalog secured by J. Mark Sublette Medicine Man Gallery Inc. All rights reserved. No portion of this online catalog may be reproduced in any manner whatsoever without written or email permission from J. Mark Sublette, Medicine Man Gallery, Inc.