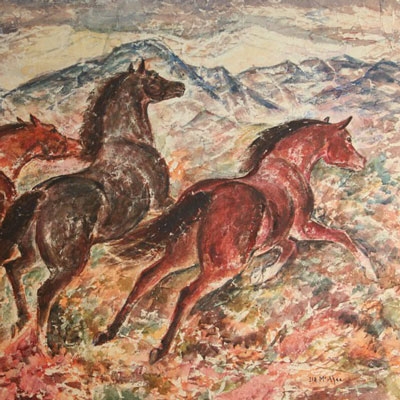 Ila McAfee was born in a Colorado ranching community, ten miles from the nearest schoolhouse. Her artistic interest began early and centered upon horses, which she would draw as a child. She received her B.A. from Western State College. Her formal art education was at the Haz Studio School in Los Angeles and the Art Institute of Chicago. Displeased with the quality of instruction, she decided to study under one particular painter she had taken courses with in Chicago, James E. McBurney. McBurney was a muralist, and took McAfee on as his assistant for several years, after which she traveled to New York to study at the National Academy of Design and the Art Students League.

Set Descending Direction
per page
My Wish List
Last Added Items
Go to Wish List
You have no items in your wish list.
Site Content Copyright 1996-2022. Permission to reproduce photos and paintings in this online catalog secured by J. Mark Sublette Medicine Man Gallery Inc. All rights reserved. No portion of this online catalog may be reproduced in any manner whatsoever without written or email permission from J. Mark Sublette, Medicine Man Gallery, Inc.