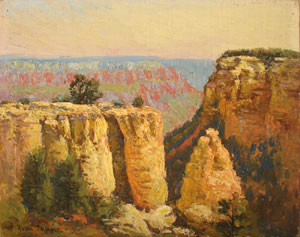 Born in 1872 in Galveston, Texas, Rolla Sims Taylor started painting at the age of 14. The Taylor family then spent several years in Houston before arriving in San Antonio, Texas in 1889. There he won first prize ($500) in a local art competition for his painting called "Entrance to the Spanish Governors Palace, San Antonio" and then sold the painting for another $500. The award was given by the Art League, now known as San Antonio Art League.

The family next traveled by covered wagon to Cuero, Texas where Rolla graduated from the Cuero Institute. He then went on to study under Robert Jenkins Onderdonk, Jose Arpa and Theodore Gentilz and then to France for three months. Upon returning, he studied with Arthur W. Best in San Francisco and Frederick Fursman in Michigan. Taylor was personal friends with artist Julian Onderdonk.

Beginning in 1894 when he won his first prize, Taylor exhibited his work locally and nationally for the next 60 years. He painted in the colorful impressionist style with much influence from Jose Arpa's style of painting. His paintings of old buildings, river scenes and local missions are now of historical interest recording buildings and scenes that no longer exist in and around present day San Antonio. Many of these scenes are shown in "Art for History's Sake" by Steinfeldt.

Taylor's works are in the Witte Museum and are very popular among Texas art collectors. He was a member of the American Federation of Arts, Chicago Society of Artists, Independent Society of Artists of New York, San Antonio Art League, Southern States Art League and River Art Group.