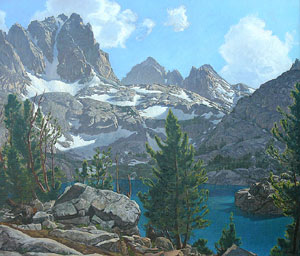 Clunie was a Scottish-American plein air painter best known for his depictions of the rugged peaks of the Sierra Nevada and Grand Teton mountains.

Robert Clunie was born in Renfrewshire, Scotland, the son of an estate gamekeeper and golf course designer.  In 1911, Robert and his older brother William decided to emigrate to the United States, settling with relatives in Saginaw, Michigan.  The remainder of their immediate family joined them in Michigan later that same year.

Robert found employment in Saginaw as a pin-striping artist with A.T. Ferrell Company, a manufacturer of grain harvesters.  During a business lull in the winter of 1918, he traveled to California where he took a striping job at the Los Angeles Creamery Company.  After two months there, he decided to permanently relocate to California and in October 1918, Robert and William left Saginaw by automobile, taking one month to reach Los Angeles.

After a brief stint as a set painter with Metro Pictures (later MGM) Robert found work in the paint department of the American Beet Sugar Company in Oxnard, California.  It was in Oxnard where he met his future wife, Myrtle Ireland, and the two were married in June 1920.  Clunie’s mother died shortly after the wedding and the couple returned to Saginaw where he again worked for the Ferrell Company.  It was during these months in Michigan that Robert turned serious attention to easel painting.

The year 1921 found Robert and Myrtle back in California, settled in Myrtle’s hometown of Santa Paula.  Along with a business partner, Robert started a house painting company with specialties in gold-leaf and faux finishes.  Within two years he was able to design and build a new home and studio where he continued to develop his artistic skills.  By 1929, the year his son, Robert Kent Clunie, was born, Robert was able to support his family solely from the sales of his paintings.

After spending much of the summer of 1929 painting in Yosemite, Mammoth Mountain, and Big Pine, California, Clunie showed his work at the Biltmore and Stendahl Galleries in Los Angeles, cementing  his reputation as a leading painter of high mountain landscapes.

Although sales fell off dramatically after the stock market crash of 1929, Clunie continued to show with the California Art Club and the Painters and Sculptors Club.  During the Depression he received commissions for dioramas at the California Exposition and State Fair in Sacramento.  In 1935 he spent two months painting in Taos, New Mexico where his work received praise from Walter Ufer and Ansel Adams.

As the Depression waned, Clunie resumed his months-long pack trips to the mountains, spending each summer from 1938 to 1941 in the Tetons and the summers from 1942 to 1966 in the Palisades Peaks of the Sierra Nevada.

In 1945, the Clunies purchased property in Bishop, California below the Eastern Sierras, and completed a new home an studio there in 1948.  Robert sold most of his work directly from his studio and from his elaborate campsites in the mountains.  In 1980, the City of Bishop mounted a retrospective exhibition of 84 of his paintings and in 1983, the Ventura County Historical Museum exhibited Clunie’s work along with that of his protégé and biographer, Richard Coons.