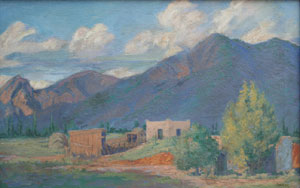 Ralph Goltry was born in 1884 near Chanute, Kansas in the Big Creek area. He studied with Charles A. Wilimovsky at the Kansas City Art Institute. When he graduated in 1904 he toured the western United States in his model T Ford making a living painting signs.

In 1922 he moved into a house in Phoenix which had a porch on the second story he could use as a studio. Goltry became a founding member of the Phoenix Art Guild. Fellow Kansas artist, John Stuart Curry, often came to visit and the two would tour and paint the Southwest together. Ralph became active also in the Taos, New Mexico art community.

During the remainder of his life, Goltry remained in Phoenix and sold his paintings of the local landscapes. He also sold reproduction rights to the Hallmark Card Company of Kansas City for at least three years. He died in 1971.