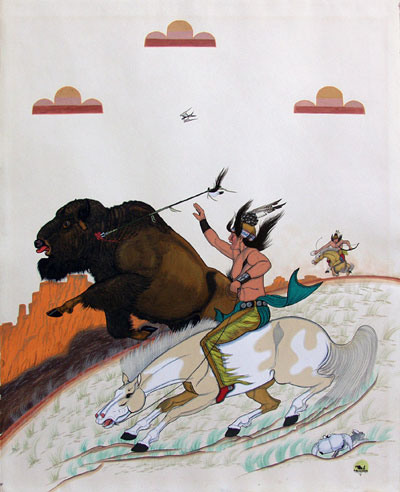 Quincy was born in 1920, at Tuba City, Arizona. He was given the Navajo name "Tahoma" which means "water's edge" in Navajo. He attended the Albuquerque Indian School from 1936-1940. He also did work at the Santa Fe Indian School where he developed his pastoral landscapes. In World War II, Quincy served as a "code talker" in the U.S. Army. After discharge, he worked briefly as a Hollywood set painter for the movie studios. He worked mostly in watercolor, casein and tempera.

In his early career, Quincy painted soothing landscapes of pastoral subject matter. After his time in the Army, he turned to subject matter of bloody Indian wars and men killing animals. He established a studio in Santa Fe and shared it with now famous southwest artists such as Harrison Begay. Quincy was known for his energy filled action scenes of Plains Indians.

Both Clara Lee Tanner and Dorothy Dunn recognized Quincy as one of the most gifted and creative artists of the American Southwest. Unfortunately, misfortune followed him most of his life and he died of alcoholism in November 1956 at the young age of 35 years.