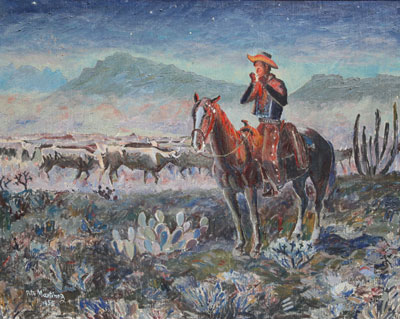 Pete Martinez was born on a ranch near Deer Creek in the area of Porterville, California. He studied art at the California School of Fine Art in San Francisco and at the Pennsylvania Academy of Art in Philadelphia. He became best known for his paintings and sketches of cowboy life, which he lived first hand.

During his life he wore many hats, but most had to do with horses in some fashion. Martinez was in World War I in the horse cavalry. He was over time a jockey, a cowboy and a riding instructor for twenty-three years in Pennsylvania. In 1935 he moved to Tucson, Arizona and opened a riding stable and art studio, where he lived until his death in 1971. Incidentally, he was a neighbor and friend of Maynard Dixon and his circle of artists and friends also included Ted DeGrazia, Thomas Hart Benton, Olaf Wieghorst, Jack Van Ryder and Ross Santee. 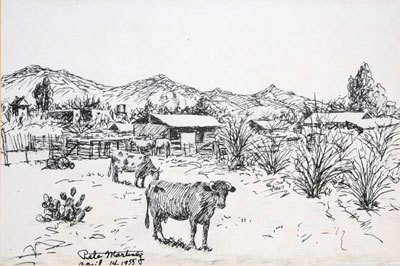 He often painted or sketched Tucson Rodeo scenes as well as competing in the riding and roping contests. He was a member of the Rodeo Cowboys Association and the Pima County Sheriff's Posse.

Over the years, Martinez made numerous trips east to Pennsylvania and New Jersey to sell his paintings. It is said that he "held court" in the Tap Room at the Tucson Hotel Congress bar during the 1930s and 40s often drinking with Lee Marvin. His paintings still hang in their bar to this day.