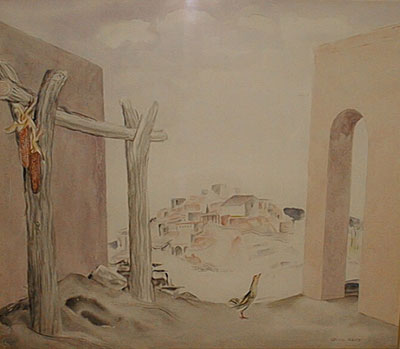 A painter and illustrator, Olive Rush is best known for her mural paintings and for being the first professional female artist to settle in Santa Fe.

Rush was born on a farm near Fairmount, Indiana and attended a Society of Friends school founded by her parents.  At age seventeen, she enrolled at Earlham College in Richmond, Indiana but left the next year to study at the Corcoran School of Art.  The youngest person in her class, Rush won a prize after her first year for the student showing the most progress.

In 1894, Rush moved to New York where she studied at the Art Students League with John Twachtman, H. Siddons Mowbray, and Augustus Saint-Gaudens while working as a staff artist for the New York Tribune.  In 1898 she received her first book commission, illustrations for  Rolinda: A Tale of the Mississinewa by Roland Whitson.  The next year, Rush moved to Philadelphia, continuing her career in commercial art and pursuing easel painting in her spare time.  She became especially known for her illustrations of women and children in magazines such as St. Nicholas and Women's Home Companion.

In 1904, the teacher and illustrator, Howard Pyle, invited Rush to become a student in his private school in Wilmington, Delaware.  Over the next six years she studied in Pyle's "Art Colony," assisted him in at least one mural project and executed her own commissions including murals at St. Andrew Episcopal Church in Wilmington.

In 1910, Rush left for study in Paris in the Richard Miller Class for Painters.  She returned to Pyle's studio the next year, but the illustrator's sudden death soon left her without a mentor or a studio.  She then moved to Boston, studying with Edmund Tarbell and William Paxton at the Boston Museum School.  In 1913 she spent the summer in Europe with fellow student, Alice Schille, and then re-settled in New York and resumed her work in commercial art.  By 1918, Rush had tired of New York and returned to Indiana to be near family.  She rented a studio in Indianapolis where she focused more on easel painting, executing portrait commissions-particularly portraits of children-and painting murals for the public schools.

Rush had first visited Santa Fe in 1914 on a trip through the Southwest with her father and brother.  She was granted an exhibit of her paintings at the Museum of New Mexico's Palace of the Governors, the first woman to gain that honor.  She later said that her New Mexico experience opened up her world and led her to give priority to her own art rather than commercial work.  In 1920, she relocated to Santa Fe where she spent the rest of her long life.  She bought an early nineteenth-century adobe house on Canyon Road which she decorated with Native American and Hispanic artifacts as well as her own fresco painting.  The little house became a gathering place for artists, especially the few female artists that ventured into the still-remote small town.  Rush also offered her home as the meeting house for the Society of Friends and she left it to the local Quaker congregation upon her death.

Rush had been interested in Native American art and culture since her first visit to the Southwest, and Native figures, artifacts, and genre became the subject of much of her work.  In 1929 she was hired to paint frescoes of Indian figures in the newly expanded La Fonda hotel on the Santa Fe Plaza.  Their popularity led to an invitation to oversee a mural project at the Santa Fe Indian School, painted by students.  This experience, in turn, led to Rush's long-time involvement in promoting Native arts and artists.  During the WPA years, Rush painted murals in the foyer of the Santa Fe Public Library, the biology building at New Mexico State University in Las Cruces, and the Pawhuska, Oklahoma Post Office, and she made a tempera painting for the Florence, Colorado Post Office.  In 1939, the Indian curio dealer, Maurice Maisel, commissioned Rush to paint a mural frieze on the façade of his shop in downtown Albuquerque.  She hired several Native students to assist her, some of whom became famous on their own, including Pablita Velarde, Alfonso Roybal, Harrison Begay, Joe Herrera, and Pop Chalee.

In addition to portraits and Native genre, Rush frequently painted landscape and animal subjects.  She was adept at a wide variety of styles, but her best-known work is delicately stylized, drawn with a very light hand, rendered in pastel colors, and clearly influenced by Oriental art which fascinated her throughout her career.  Rush showed widely in national exhibitions as well as the New Mexico Museum of Fine Art which gave her a major retrospective exhibition in 1957.