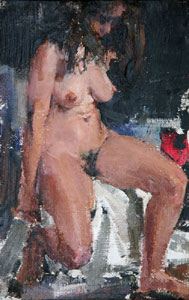 Nicolai Fechin was one of the most unusual and inventive of the Taos artists, an internationally-acclaimed academic artist whose work while in New Mexico looks unlike almost any other artist practicing in the region at the time.

Born in Kazan, Russia, Fechin's father was a woodcarver and guilder. His hard-working and fastidious nature rubbed off on his son, who was a somber and serious individual with little disposition towards socializing and seemingly unlimited amounts of time for his art. At the age of thirteen, Nicolai enrolled at the newly-opened Art School of Kazan, which was essentially a satellite campus of the Imperial Academy of Art of St. Petersburg, which he went on to study at the completion of his studies in Kazan. There, he was a star student, receiving a six-year scholarship and exhibiting work at the Carnegie Institute in Pittsburgh (where he first came to the attention of American collectors) and the Prix de Rome (at which he won a gold medal). This international fame would be crucial as, in the wake of the Bolshevik Revolution, Fechin's life became quite hard and, with the help of American collectors W.S. Stimmel and Jack R. Hunter, he and his family were repatriated to New York City, where Fechin taught at the New York Academy of Art. In 1924 he won the Thomas Proctor Azard for best portrait at the National Academy Exhibition, and it appeared that Fechin's New York career was picking up.

A bout of tuberculosis put an end to that, however, and Fechin, following in the footsteps of a great many artists who first discovered New Mexico as invalids, moved to Taos in order to recover. There, he stayed with Mabel Dodge Luhan while he built his own home, the sumptuous Fechin House, still standing today and absolutely remarkable in the level of detail and craftsmanship in the Fechin-designed structure. Architecture had been a required element of the curriculum at the Imperial Academy, and Fechin's house is a gorgeous regionalized piece of modernism, blending together the architecture of the Tatars of his native Russia with the pueblo architecture of the southwest. In his painting, Fechin focused on portraits, generally of native peoples. 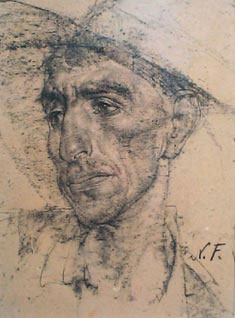 It was the technique and the approach that made a Fechin portrait more than the equal of anyone else's. Masterful with a palette knife, with extraordinary color usage, Fechin used whatever he could, including his hands, the achieve the effect he was looking for. His portraits have nervous lines and a frenetic energy that seems to focus the viewer's attention on the facial features of the individual being painted. They were highly sought-after by the rich and famous, and some celebrities, including Willa Cather, chose Fechin to paint their portraits.

In 1927 Fechin became embroiled in a messy and destructive divorce that necessitated his departure from Taos. At the urging of the Los Angeles art dealer Earl Stendahl, he moved to the Hollywood Hills. He also began traveling extensively, visiting Bali, Java, Mexico and Japan. In the late 1930s he attempted to live in Bali, but was driven back to the United States by the beginning of Japanese hostilities in the Pacific. He bought a studio in Santa Monica and became more sociable than was his custom. In October 1955, shortly before his death, a major retrospective of his work was launched in San Diego and La Jolla, at which Fechin was able to see a number of paintings he had not seen for decades.