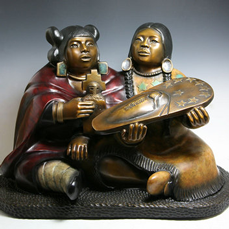 Native American sculptor Doug Hyde was born in Oregon and is of Assiniboine, Nez Perce, and Chippewa heritage. Hyde learned about his ancestry from his grandfather and other elders who instructed him on legends, ways, and beliefs of his people. Hyde attended the Institute of American Indian Arts in Santa Fe, where he learned from acclaimed Apache sculptor Alan Houser. He briefly attended the San Francisco Art Institute before enlisting in the army in the late 1960s. Hyde was seriously wounded by a grenade during his second tour of duty in Vietnam.

After he left the military, Hyde took a job working at a friend’s tombstone business. As Hyde learned how to cut and shape stone using power tools during the day, he used these same skills to make sculpture at night. Hyde entered these sculptures in a museum show and, when every piece he made sold, he realized that he could pursue a life as an artist. Doug Hyde works in Santa Fe, where he has lived since 1972, telling the stories of his youth or representing historical events through his bronze and stone works.

Set Descending Direction
Page
per page
My Wish List
Last Added Items
Go to Wish List
You have no items in your wish list.
Site Content copyright 1996-2021. Permission to reproduce photos and paintings in this online catalog secured by J. Mark Sublette Medicine Man Gallery Inc. All rights reserved. No portion of this online catalog may be reproduced in any manner whatsoever without written or email permission from J. Mark Sublette, Medicine Man Gallery, Inc.