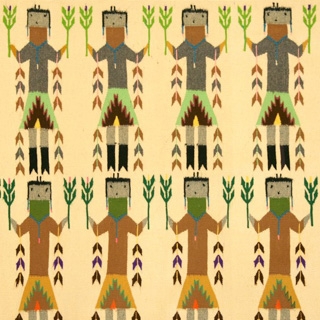 Navajo Yei rugs and sandpainting rugs are inspired by actual Navajo sandpaintings performed during cultural ceremonies. It is important to note that these rugs do not duplicate entire sacred images; instead, they depict only certain elements the weaver chooses to share. One of the most popular types of sandpainting weaving is a Yei rug, which features stylized depictions of the Navajo Yei deities or holy people.

Historians believe that the first person to depict sandpainting elements in a Navajo weaving, around 1916, was Hosteen Klah (1867-1932), a Navajo medicine man and artist. It is important to note Yei rugs and other sandpainting rugs are not sacred objects themselves. Weavings of this type, however, are still somewhat controversial within the Navajo community, and some weavers prefer not to use such imagery in their textiles.

There are two conceptually related forms of these rugs of which you should be aware:

Other Navajo rugs with figures

Note that not all Navajo weavings with figures are necessarily Yei or Yeibeichei rugs. These other human illustrations would be characterized as pictorial Navajo weavings since they do not reference elements from sandpaintings. Instead, these figures are simply examples of textiles where the weaver displays an excellent grasp of creating representational images.

Figures you might see in pictorial weavings include Hopi kachinas with the distinctive tableta headdresses (created briefly in the 1910s) or scenes from Navajo life.

The Navajo Yei (also written yeii, yéí, yéʼii) are Navajo deities or holy people. There are several entities in the Navajo belief system called Yei, and as such, the discussion of Navajo Yei is complex. The Yei are often portrayed in spiritual Navajo sandpainting ceremonies.

It is important for Native American art collectors to recognize that depictions of Navajo Yei are not exact replicas of complete sandpaintings; instead, these weavings include only elements from sandpaintings the weaver chooses to share.

Ever since the respected Navajo healer Hosteen Klah (1867-1932) wove the first Yei rug in 1916, Navajo Yei weavings have been extraordinarily popular with collectors; this style of Navajo weaving is now created throughout the reservation.

In this article, you will learn about Navajo Yei rugs and why collectors find them so desirable. The article also provides an overview of Navajo sandpainting ceremonies and how Yei rugs are related to them. Read more...

In this comprehensive article, Dr. J. Mark Sublette discusses Navajo rugs from the 1920s to the present day, including sections on Yei and Yeibeichai rugs, sandpainting rugs, and other pictorial rugs. Read more...

Navajo textiles expert Dr. J. Mark Sublette has been a leading authority on authentic Navajo rugs and blankets for over 30 years. Medicine Man Gallery, located in Tucson, Arizona, has one of the country’s largest collections of Navajo weavings, including a Yei rugs, Yeibeichai rugs, sandpainting rugs, and pictorial Navajo weavings.