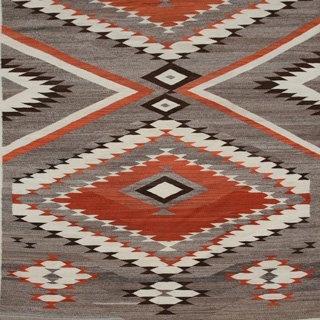 The Crystal Trading Post (established 1896; now closed) was located on the Navajo Reservation in far western New Mexico, high up in the Chuska Mountains. Due to its remote location, trading post proprietor J.B. Moore had to be resourceful to sell the Navajo rugs he purchased from the local weavers. He published a mail-order catalog in 1903 and 1911, selling Navajo rugs to people in the eastern United States. These catalogs would allow a buyer to choose specific designs and wool quality. Printed images of the rug designs - called plates - appeared in the catalogs, and the weavings that resulted from them are now known as plate rugs and are highly collectible. Plate #28 in the first catalog is the best-known plate rug, the storm pattern.

Navajo Crystal storm pattern rugs have a distinctive design that emerged from the now-defunct Crystal Trading Post starting at the turn of the 20th century. The trading post’s proprietor, J.B. Moore, marketed Navajo rugs to buyers in the eastern part of the United States with mail-order catalogs (one in 1903 and one in 1911). The storm pattern was one of the rug designs that could be ordered and quickly became popular with collectors. Navajo storm pattern rugs are still made to this day.

J.B. Moore, the proprietor of the Crystal trading post from 1896 to 1911, was highly influential in the style of rugs woven by Navajo rug weavers who lived in the area of his trading post. Moore liked the aesthetic of Oriental rugs and encouraged the local weavers to incorporate similar design motifs into their own rugs.

The Crystal trading post (now closed) was remotely located on the New Mexico side of the Chuska Mountains, at an altitude of about 7000 feet. Since he lacked heavy tourist trade at his trading post, Moore created a mail-order catalog in 1903 and again in 1911, selling Navajo rugs to people back east. Buyers could choose their desired design and yarn quality; Moore would then have the rug made.

The illustrations in the catalogs (known as plates) were numbered for ease of ordering. Vintage Navajo rugs that are exact or near-exact copies of specific plates are known as plate rugs today and are highly desired by collectors.

Navajo rug weavers from the Crystal region didn’t just weave plate rugs, however. These artisans would use elements from the plates in their own designs, producing unique weavings but still distinctive as Crystal rugs.

J.B. Moore, proprietor of the Crystal trading post from 1896 to 1911 influenced the Navajo rug design aesthetic by encouraging weavers to create rugs that were reminiscent of Oriental rugs, with similar motifs woven in the Navajo way. Since the Crystal trading post was located in a remote mountainous region, Moore printed and sent mail-order catalogs (one in 1903 and one in 1911) for Navajo rugs to buyers back east. Buyers could select a design from the catalog as well as the grade of wool to be used. Not only did weavers make rugs that were exact replicas of those found in the catalogs, but they also used the most popular design elements in rugs of their own composition.

Here are some of the common design motifs that characterize Crystal rugs:

The waterbug motif is a popular Crystal rug design element. Waterbugs usually have a central “body” with four “legs” - two on each side. These motifs can be quite abstract, sometimes with multiple waterbugs forming a larger, repeating pattern.

The fret shape (also called a key) is a design element derived directly from Oriental rugs and is a popular border pattern in Navajo Crystal rugs.

The chevron is a zigzag pattern used in Navajo Crystal rugs. As in the example pictured here, a chevron border can make a highly visual pattern.

The Whirling log motif is an ancient symbol that was used by many cultures. Trader J.B. Moore (and other traders of the day) encouraged Native American weavers to incorporate this symbol into their weaving patterns. Seeing this motif in a rug helps us date the weaving as the use of this symbol by weavers ceased altogether in the 1930s due to WWII.

Crosses, especially in borders, are a classic Crystal rug motif, seen in the J.B. Moore catalogs. They can be solid or outlined, and their use imparts a timeless, bold design aesthetic that is as appealing now as it was in the early 20th century.

A Valero star is an eight-pointed star motif found in Navajo and Hispanic weavings beginning in the 1800s. Weavers of Navajo Crystal rugs often incorporate Valero stars, either as single motifs, in rows as a border, or occasionally as a repeating pattern for an entire weaving.

A Navajo storm pattern is a unique subset of Crystal rug motifs that together form a larger pattern. Storm pattern rugs have been popular from the days of the J.B. Moore’s 1903 and 1911 mail-order catalogs and remain popular to this day.

Storm patterns are characterized by a large, central rectangle connected by zig-zag lines to four smaller rectangles - one in each corner. Any of the other Crystal rug motifs discussed here may also be included, such as waterbugs or whirling logs. 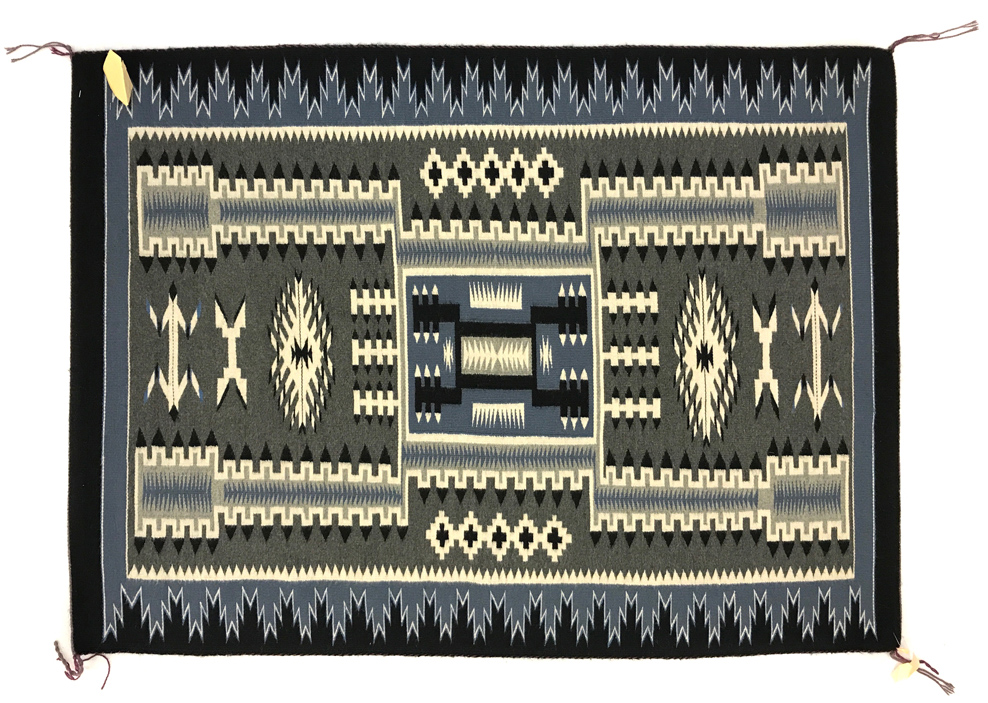 Learn more about Navajo Crystal rugs, with a focus on storm patterns as well as discussion of the early Crystal Trading Post proprietor J.B. Moore and his early 20th-century catalogs.

In this article, Medicine Man Gallery CEO, Dr. J. Mark Sublette discusses the many diverse regional styles of rugs. Included in the text is an exploration of rugs from the Crystal Trading Post region and the lasting influence trading post proprietor J.B. Moore had on Navajo weaving. Read more... 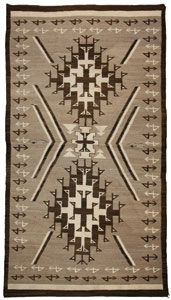 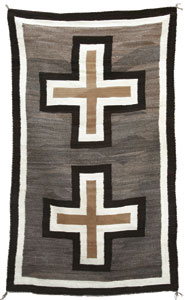 In this article, Dr. J. Mark Sublette, CEO of Tucson’s Medicine Man Gallery, discusses the evolution of Navajo rugs, including the characteristics of Crystal rugs woven around and after WWII. Read more... 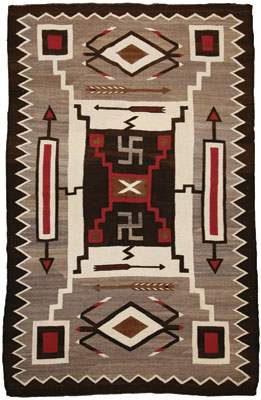 This article explores the symbols and motifs in Navajo weavings that are important for collectors to know. Included in the article is a discussion of the controversial whirling logs motif and its history. Early examples of Crystal rugs with this symbol are shown.Read more...

Medicine Man Gallery CEO, Dr. J. Mark Sublette, is one of the nation’s leading authorities on Navajo rugs and blankets. Medicine Man Gallery, located in Tucson, AZ, has a large collection of authentic historic and contemporary Navajo weavings, including rugs from the Crystal Trading Post region.