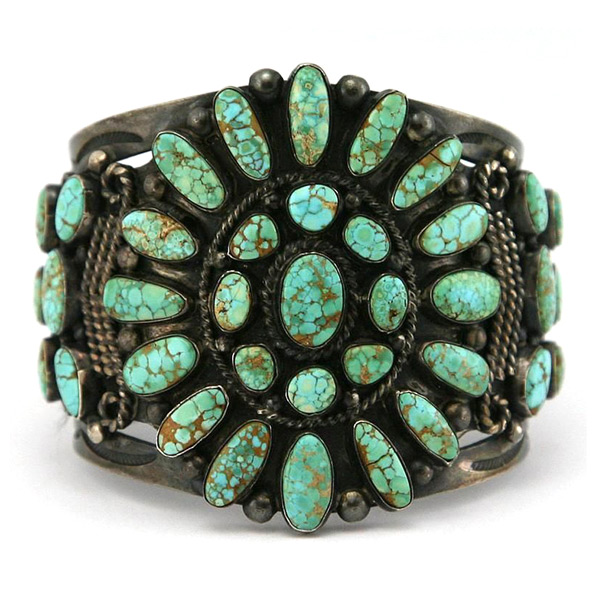 No traveler in the Southwest can ignore the abundance of gorgeous silver and turquoise jewelry available at every turn. Old Pawn jewelry is our specialty - authenticity guaranteed. Hundreds of pieces of antique Native American jewelry online. We purchase our old pawn from estates, private collections, and directly from the reservation. To learn more about specific jewelry makers, please see the Medicine Man Gallery Native American Jewelry Hallmarks image database.

Old pawn Native American jewelry has been at the heart of the Southwest economy and culture for roughly 150 years. Its demand is greater than ever among collectors who want authentic jewelry that has actually been worn and coveted by the indigenous people who created it which is becoming scarcer and more valuable by the day.

The Navajo had traditionally measured their wealth in terms of livestock and blankets. However, after their release from four years of confinement at the Bosque de Redondo in 1868 they returned to a more sedentary lifestyle restricted to their reservation and needed new sources of income.

Atsidi Saani was the first Navajo who learned blacksmithing at Fort Defiance, Arizona, in the 1850s. In the 1870s he applied this knowledge to silversmithing and taught others these skills. The first Navajo silversmithing was applied to horse bridles, but quickly spread to bracelets and other forms of jewelry. Turquoise began showing up in Navajo jewelry in the 1880s, but sparingly at first. This was the same time that the railroads reached the Southwest and a market for Native American jewelry opened up selling to the new tourists coming to the area.

Much of this early Navajo handcrafted jewelry shows remarkable expert workmanship for the relatively simple tools the jewelers had at the time. They would work the metal with silversmithing tools made from the hardened steel springs of wagons, old iron files and chisels.

Because Native Americans had no access to cash or banks on reservations, jewelry became a portable form wealth not only used on the reservation as barter, but as the widespread commodity of exchange with the traders for cash and supplies.

In times of need, Native American turquoise jewelry could be pawned to authorized agents and pawn shops that were springing up along the boundaries of the reservation. The lender would give the Native Americans credit using the pawned jewelry as collateral to guarantee that the loan would be repaid within a specified period of time – usually 90 days to one year. The rate of interest on the loan was regulated by the Bureau of Indian Affairs at 10% a year. The terms of most loans were 120 days and could be renewed by paying the interest.

While 70-85% of the jewelry pawned in this manner was usually paid off and reclaimed, the items that were not were then known as “dead pawn”. After a certain grace period most traders would grant to maintain good relations with their Native American clients, the unclaimed jewelry would be placed on public display for sale to repay the dept. When family elders died, their jewelry was also often pawned in this manner to receive cash which could then be split up among the heirs.

What makes old pawn jewelry so special is that this is the jewelry the Native Americans made for themselves and wore as adornment and a display of wealth that was often passed down in families over generations. There would often be a lot of movement of jewelry in and out of the pawn shops during the summer ceremonies and dances as the pawn shops were also a way of keeping this jewelry safe for the Navajo - who were herders and moved with their flocks - much like putting one's money in a bank for safekeeping.

Authentic old pawn jewelry usually has a dark satin patina tarnish that has not been polished. The turquoise stones often have a greenish tinge that comes with wear taking on the oils of the skin. It’s exactly this natural antique wear from years of daily use and adornment in the dances and ceremonies - together with its heavy weight in thick ingot silver and that the turquoise is genuine natural turquoise which has not been “stabilized” or soaked in plastic to harden it - which is what gives old pawn jewelry such highly sought after demand and lasting value.

The earliest Navajo silver jewelry started in the 1870s with ingot jewelry that was American silver dollars or Mexican silver pesos that were melted and hand hammered into silver jewelry. It became common at a certain point around the turn of the twentieth century for Native American laborers to demand their payment in silver coins they could turn into jewelry.

One of the things to look for authenticating early Navajo ingot jewelry is craquelure - which is a very fine kind of breakage that looks like spider webbing. This indicates the piece was not made from machine milled sheet metal, but was an ingot that was forged and hand hammered showing the impressions of the tool marks. Craquelure is a very important identifier of authenticity.

This video will help you learn to identify authentic early Navajo Squash Blossom Necklaces. It discusses the kind of silver used, the shapes and motifs, and use of turquoise.

Ingot jewelry was the earliest type of jewelry made by the Navajo (or Diné, in their language) - made by melting down silver bars or pounding out silver coins with a hammer to create their jewelry. This video will discuss how to identify and date authentic antique Navajo ingot jewelry.

When NOT to Polish your Native American Jewelry

Learn about the early forms of Native American jewelry, an art form introduced to the Navajo and the Pueblo cultures approximately 150 years ago. Learn how the early Native American silversmiths took Mexican blacksmithing traditions and made the art form their own. Read more...

An excellent review of the history of Navajo silversmithing with a discussion of authentic old pawn jewelry and common jewelry designs, such as squash blossom necklaces. Read more...