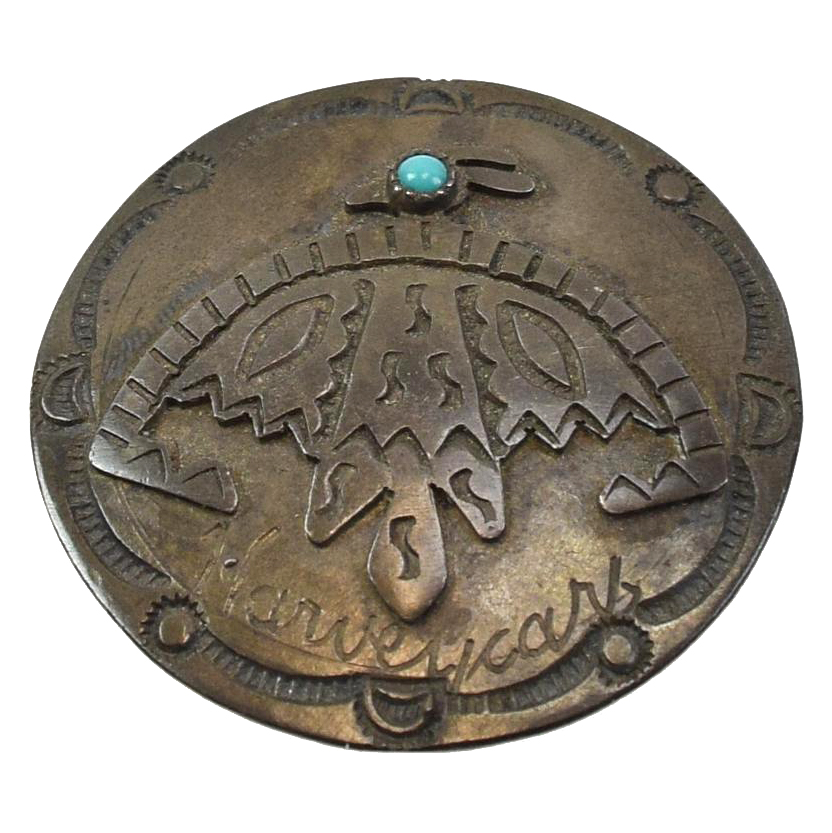 Fred Harvey jewelry is vintage Southwestern jewelry made by The Fred Harvey Company in the first half of the twentieth century. Sold in the company’s “Harvey House” restaurants and hotels, this jewelry was manufactured for the tourist trade that flooded into the American Southwest with the advent of the Santa Fe Railroad. The company’s marketing department chose the jewelry motifs (such as the thunderbird, arrows, and snakes) to appeal to tourists. Even though Native American hands did not typically make the jewelry, the Fred Harvey jewelry style did influence Navajo silversmiths of the day because of its popularity with buyers. Today, authentic Fred Harvey jewelry is collectible in its own right, given its historical context.

Frederick Henry Harvey (1835-1901) was a London-born entrepreneur responsible for creating the first “chain” restaurants and hotels in America.

Harvey Houses, as his hospitality locations were known, were located along the new Santa Fe Railroad lines and helped open the Southwest to tourism in the 1890s by providing fine dining and selling souvenirs and jewelry to travelers.

Together, the Santa Fe Railroad and the Fred Harvey Company had a transformative impact on the image of the American Southwest. These two companies created the perception that Americans have of the Southwest that largely persists to the present day by changing the 19th-century Western narrative of cowboys, Indians, and buffalo to one that portrayed skilled artisans living in peaceful Native American cultures.

In addition to Fred Harvey Company’s involvement with food and lodging, the company also had a significant impact on the “curio’ trade, with Southwest-themed turquoise jewelry being one of the most popular items tourists purchased to take home.

Fred Harvey died in Leavenworth, Kansas, in 1901. The Fred Harvey Company continued to be run by Harvey’s sons and grandsons until 1965; a conglomerate purchased it in 1968.

“Fred Harvey era” jewelry is jewelry that was made by the Fred Harvey Company in the first half of the 20th century to sell to tourists coming to the Southwest on the railroads. The company sold the jewelry in their restaurants as souvenir items.

Up to this time, authentic Navajo silver jewelry was heavy, hand-hammered ingot jewelry. Fred Harvey jewelry was made specifically to appeal to the traveler from the east, with smaller turquoise stones and a lighter-weight feel.

Each piece of Fred Harvey jewelry was made from thin sheets of silver, machine tooled, and mechanically stamped. While some of the jewelry was actually made by Native American hands, most of it was made by machine, including in locations far away from the Southwest, like New York.

While the Navajo jeweler’s personal tastes preferred the heavier ingot jewelry with larger turquoise stones, when they saw how the lighter machine-milled silver was being bought by the tourists, they began making jewelry for the tourist trade in this style too.

So over time, what was authentic Native American jewelry vs. mass machine-produced souvenir jewelry - or a hybrid of the two - became blurred. Today, Fred Harvey era jewelry is widely collected as an antique jewelry genre valued for its Southwest look and historic context.

Fred Harvey Jewelry is often mistakenly referred to as “old pawn”. In fact the Navajo much preferred their own heavier handcrafted ingot jewelry over the light machine cut and machine tooled jewelry sold to the tourist market. This is not what the Native Americans themselves usually wore. So very little of it actually ended up being pawned by with the expectation of reclaiming it; instead, it was jewelry primarily sold to tourists.

Fred Harvey jewelry is vintage silver jewelry from the first half of the 20th century that is lightweight and made with machine-tooling and mechanical stamping. The pieces were embellished with soldered-on designs that had a Southwest look, such as thunderbirds, lightning bolts, crossed arrows and arrowheads, dogs and snakes.

Note that the symbols found on Fred Harvey jewelry were not of Native American origin but instead created by the company’s “Indian Department” marketing director, Herman Schweizer. For example, the company patented the thunderbird design and brought it into widespread public awareness through their marketing efforts. 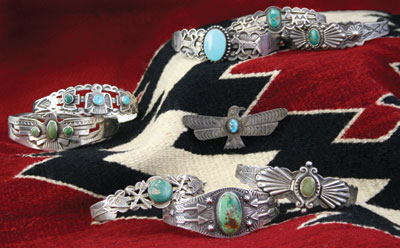 About the Fred Harvey Company

In this article, you will learn about Fred Harvey era jewelry, the Fred Harvey Company, and the lasting cultural impact of this hospitality industry pioneer. Read Read more...

This comprehensive article discussed authentic silver jewelry of the Navajo and Pueblo cultures, including the impact of the Fred Harvey Company and the tourist souvenir trade. Read more...