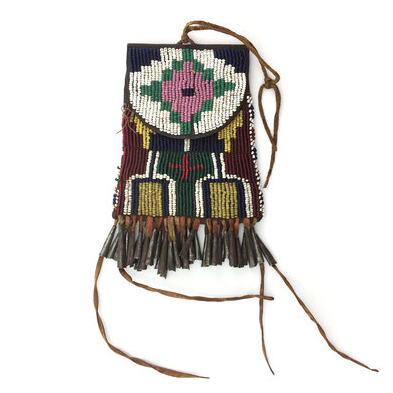 No organization had a greater impact on the American southwest as the Santa Fe Railroad and the Fred Harvey Company. In fact, these companies practically “invented” the image of the southwest that Americans have today.

The Fred Harvey Company promoted a “kinder-gentler” image of skilled artisans and colorful, peaceful, Indian cultures, instead of wild Indians, cowboys, and buffalos of the 19th century.

The Fred Harvey of Santa Fe Railway pioneered innovative marketing techniques that are still in use today in the travel industry. The Santa Fe could have called their trains the Stockyard Limited or the Wyatt Earp special.

However, they chose exotic names from the southwest such as the Super Chief or the El Capitan. These names appeared on advertising posters throughout America with images of Navajo or Hopi Indians working on crafts of the southwest.

But few are aware of the Fred Harvey Company’s involvement in the “curio” trade and even more astonishing, the impact on museum collections. “Minni” Harvey, Fred Harvey’s daughter, and Herman Schweizer, a German immigrant, became one of the largest collectors of American Indian art in the world. Herman Schweizer came to America from Germany on September 12, 1885.

He traveled to Chicago where he met relatives and friends, then, on to Los Angeles. For a time, he worked for the Atlantic and Pacific Railroad (later to become the Santa Fe Railroad) as a newsboy. However, Herman’s claim to fame with the Harvey Company came just after he had been appointed in charge of the Coolidge New Mexico eating house on the Santa Fe Railroad.

In his spare time, Herman had roamed the Navajo and Hopi reservation in search of trinkets or curios to sell at the Coolidge restaurant. Minni Harvey was aware of the popularity of Herman’s curios at the Coolidge restaurant and encouraged him to expand his curios to other Harvey establishments. With Minni Harvey urging and Ford Harvey’s support, the company took on the Indian Curio Trade and established the Fred Harvey Indian Department in 1901.

Even though H. L. Hunkel (Minni Harvey’s husband) was in charge of the Indian Department and lived in Kansas City, Herman Schweizer was the Harvey’s man to get things done when the Indian Department opened their building at the Alvarado Hotel in Albuquerque in 1902. Herman was the “boss” in the southwest. Schweizer had spent over 16 years in the southwest and had developed an extensive network of personal relationships and business dealings.

Furthermore, he had been hiring Navajo and Hopi craftsmen through a trading post in Thoreau, New Mexico to create Indian jewelry for the Harvey Company. Postcard of the Alvarado Hotel, Albuquerque, NM, c. 1920
Courtesy Palace of the Governors (MNM/DCA) Negative no: 046643

Herman created the Harvey style Indian bracelet. He found that the large turquoise nugget bracelet did not find favor with the Victorian traveler. He had the Indian craftsmen reduce the size of the traditional silver pieces that would appeal more to the traveling tourist and would better fit eastern dress styles.

Perhaps, one could easily say that almost every trader in the southwest was on contract or employed by the Fred Harvey Company at any one time during the history of the company. Herman did not stop at curios but began buying collections from the various traders to showcase in the Indian Building in Albuquerque. For over five years, Herman engaged in acquiring the finest of the southwest Indian art.

The author, Frank Waters, indicated the “F. H. Indian Building at the Santa Fe Station in Albuquerque New Mexico was equal to any modern museum and all transcontinental passenger trains were stopped there for thirty miniutes.”

The early years of the 1900s was a period of great international expositions. Such opportunity was not lost to Herman Schweizer and the Fred Harvey Company at the 1904 Louisiana Purchase World’s Fair in St. Louis, the 1915 fairs at San Francisco and San Diego.

The company saw the opportunity to promote travel and showcase Indian crafts of the southwest. Nampeyo, Maria Martinez, Fred Kobotie, Elle of Ganado were just a few of the Indian artists the Fred Harvey Company promoted at the world’s fairs to millions of Americans. Although Herman Schweizer was known as the “Fred Harvey anthropologist,” he did not have the credentials of a true anthropologist. To establish legitimacy of the Harvey activities, Schweizer formed a business association with George A. Dorse, curator of Anthropology at the Field Columbian Museum in Chicago.

Throughout the early part of the 20th century, the Harvey Company purchased and sold major Indian art collections to collectors and Museums in the United States. Almost every major museum East of the Mississippi river acquired at least a few southwest ethnographic items from the Harvey Company. The post World War II era changed the company drastically. Automobile availability and new transcontinental highways meant the Harvey Company and the Santa Fe Railroad no longer had complete control of travelers to the American southwest. The new highways did not pass by the Fred Harvey restaurants and hotels. Ford Harvey died in 1926, John F. Hunkel in 1936, and Herman Schweizer in 1943. By 1946, the Harvey Company no longer had unlimited funds to purchase private art collections and the great era of collecting ethnographic materials virtually came to an end. However, the company still controlled the vast amount of the items they had collected over their forty years of operations. Byron Harvey III, born in 1932, was the great-grandson of Fred Harvey, Sr. He attened Harvard and University of Chicago and completed a degree in anthropology at the University of New Mexico in 1960. Byron always had a strong interest in American Indian art and ethnographic materials.

He took up the challenge of identifying information on the Fred Harvey collection that had been lost from the time of Herman Schweizer. Furthermore, he helped to shape the future of the Harvey Indian Art Collection begun in 1902. He helped organize the Fred Harvey Fine Arts Foundation in 1969, and gave much of his personal time and support to museums throughout the country.