As early as 1917 and until at least the early 1930s, Maynard Dixon experimented with non-objective painting, and he did so in an unusual way. Like a number of other artists during the twenties and thirties, Dixon turned inward, seeking validation and meaning in the relationship between himself and his art. Knowledgeable about the varieties of early modernism-fauvism, futurism, expressionism, surrealism - he secretly painted over sixty small watercolors and oils in an idiosyncratic, expressionist manner, often surrealistic, with vivid fauvist colors. The subjects are haunting, enigmatic, and in a number of cases, erotically charged. Figurative compositions, particularly nudes, seem particularly prominent in the collection like Torso Chorus, Nude with Pink Hair, Nude and Satyr, and Woman on Stairs. Other subjects dealt with warfare such as Russian War and War in Russia. There are hellish-looking landscapes like Fiery Mountain and Dixon’s sardonic musings on Charles Darwin, for example, Ape or To Hell with Darwin. Some of the works he signed “Nvorczk,” perhaps in smug defiance of the European avant-garde, but more likely because he did not want anyone knowing that he just might be intrigued with internalized visions not connected to an empirical natural world. These paintings may also be related to his skirmishes against the onslaught of European modernism and the imitative dogmatism that many American artists adopted. More intriguing is that a number of these works may have been intended as psychological releases for the times Dixon suffered periodic bouts of paralyzing uncertainty about his personal life and art.

Unlike his good friend, the artist James Swinnerton, whose mantra was “I don’t try to improve on God,” Dixon sought out new ideas that stimulated different perceptions in his paintings. Around World War I, modernism knocked on his San Francisco studio door. He did not fling the door wide open and embrace all of the movement’s dynamics, but cracked it a little, analyzing what stood before him and what he could use in his art. According to art historian Wanda Corn, “artists who set themselves apart from academic and realist models of art . . . embarked on new visual languages of cubism, expressionism, and abstraction. Living in the modern era, they believed they must invent a language to express the newness of their age. But Dixon never settled completely into the main flow of American modernism. Instead he floated around the movements eddies and side currents, reluctant to take the plunge into the vortex. Never quite a full-blown modernist, his art is a realism tempered by his awareness and some acceptance of the newer, more radical art forms, and these paintings show his interest in exploring the uncharted terrain of modernism. Compelled by a sense of distance from New York or Europe, Dixon felt the need for reinvention in his painting. 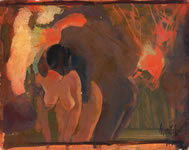 Perched at America’s western edge, San Francisco boasted a swirling, vibrant art scene in the 1920s and 1930s. Framed by the Jazz Age, the Great Depression, and the beginning of World War II, exhibitions of leading European and American painters were routinely mounted by the Bay Area museums, offering chances to see work by Picasso, Matisse, Cezanne, Braque, Gauguin, Surrealists, the German Expressionists and other giants of modernism. When modern art became entrenched in the Bay Area by the middle 1920s, it ripped apart the conservative veil on California art that had only been partially pushed aside in 1915 at the Panama Pacific International Exposition. Dixon, driven by his keen intellect and restless curiosity, frequently visited San Francisco’s museums and galleries where examples of this new art would be exhibited, trying to understand the implications for his own art. 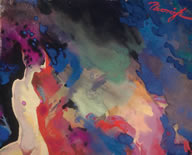 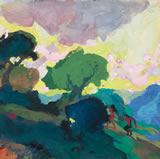 These oils and watercolors offer a rare insight into Dixon’s search for his own artistic identity, his inner struggles with the advent of an avant-garde art, and his role in the broader aspects of American modernism. By the early 1920s, there seems to be two Maynard Dixon’s in relationship to his art. One was a progressive artist that looked to the future; the other one clung to the past, the myth of the Old West, and antimodernism. These works show that Dixon was the former here, a forward-looking artist intrigued enough with “the art of the new” to at least experiment with abstraction in painting. This remarkable collection is part of the long formative journey toward his personal identity and the ongoing struggle with “being modern” in his art. 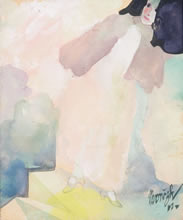 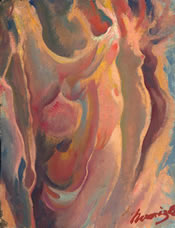