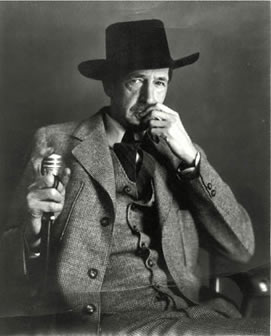 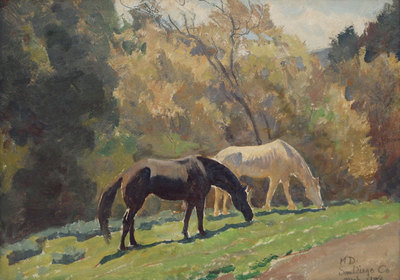 Maynard Dixon's mentor, Charles Lummis, encouraged Dixon early in his painting career to leave California, and "travel East to see the real West". Maynard Dixon did just that, traveling the many roads that crisscrossed the West: Montana, Utah, Nevada, Arizona, and New Mexico. Lasting weeks, to even months, these trips provided Maynard Dixon with the inspiration to create. He was forever drawn to the vistas and peoples inhabiting these remote western lands. 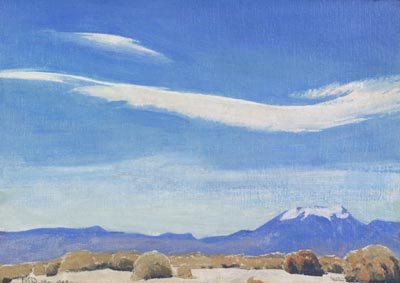 Arizona: When Maynard Dixon first visited Arizona, at the turn of the 20th century, it was wild, open territory, inhabited primarily by Hispanics and Native Americans. In 1902, he made his first visit to Lorenzo Hubbell's Ganado trading post, and came away with wonderful sketches he would use as inspiration for many years to come. Viewing these works, one can imagine the awe Maynard Dixon felt in the raw beauty of the landscape and its inhabitants. He would return to Arizona many times, ultimately making Tucson his final home. 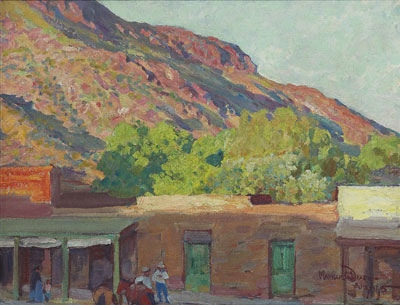 The Arizona paintings represent the entire gamut of painting styles Maynard Dixon utilized during his productive career. Heavy impasto and bold colors are typical of his work in the teens. Many of these canvases depict real places and people that Dixon experienced between 1914, and 1916. By the twenties, Maynard Dixon expanded his technique, experimenting with both post-Impressionism, and Cubism. Surrounded by the landscape and people of Southern Arizona in the final years of his life, Maynard Dixon created works with a sparing use of paint and subdued color scheme. Paintings utilizing Maynard Dixon's powerful command of light and shadow are often considered quintessential Dixon works. 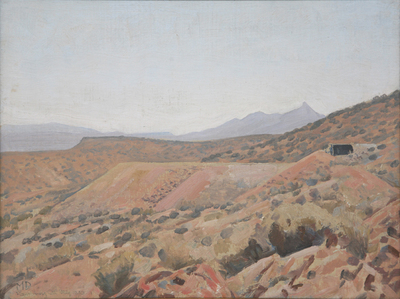 California: Although Maynard Dixon called California home for most of his life, this state was inspiration for only a fraction of the work he produced. Many California paintings were done around his boyhood home of Refuge in the San Joaquin Valley; although many of these works look as if they could have been painted anywhere in the Southwest. Like the majority of Maynard Dixon's work, the California paintings primarily depict remote, desert landscapes. 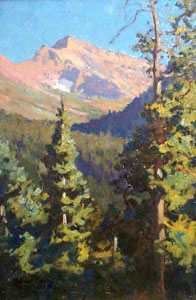 Montana: Maynard Dixon only visited Montana twice, in 1909 and 1917. The lush, heavily-tree-laden vistas did not appeal to him as much as the barren Southwestern deserts, but Maynard Dixon's love and respect for the Native Americans he met and lived with for a time were the inspiration for the majority of this region's paintings. Although primarily small in size, the canvases give fantastic insight into the life of the northern Plains Indians. Due to the scarcity and universally appealing subject matter, the Montana works are some of the most sought after by collectors and historians alike. 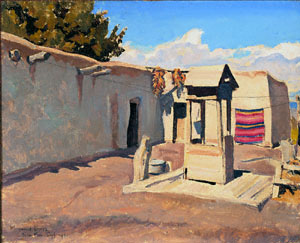 New Mexico: The time Maynard Dixon spent in New Mexico from September 1931 through January 1932 was a happy, contented time for Dixon. Living with wife Dorothea Lange, and children John and Dan, in a house provided by his dear friend Mabel Dodge Luhan, Maynard Dixon completed some of his most productive, and inspired paintings. During the five-month stay, Maynard Dixon was very prolific, painting more than forty canvases of all sizes. Many of these paintings told a story about the interaction between the land and its people. At that time, Northern New Mexico was the heart of a thriving art community. 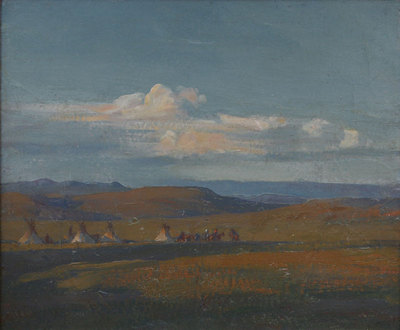 The Taos Society, a group of well-trained and respected artists invited Maynard Dixon to join their exclusive alliance. True to form, Maynard Dixon declined the offer, finding their bylaws on which paintings could be exhibited too confining and rigid. Dixon, the self-taught, highly individualistic painter, had great inner strength and distinctiveness. The New Mexico period represents some of Maynard Dixon's finest works, ones in which his special qualities are clearly imparted. 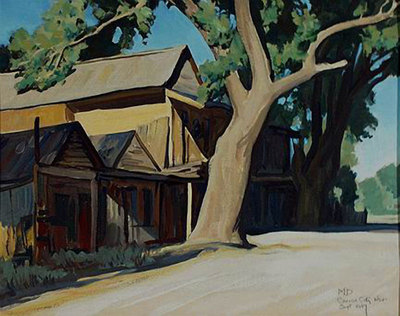 Nevada: Nevada could have easily claimed Maynard Dixon as one of its own. If not for the cool weather and high altitude of Carson City, Maynard Dixon might well have spent his last years there instead of Tucson. Many of his strongest canvases resulted from the places he visited in Nevada during the 1920's and 30's. One of his favorite and frequent subjects were the trees that prominently dotted this Southwestern terrain. In addition, some of Maynard Dixon's finest desert landscapes stem from his time in Nevada. 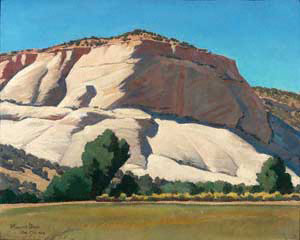 Utah: Utah was a favorite place of Maynard Dixon's; he loved the light and found the Mormon people gracious and kind. In a Christmas card to his good friend Joe, Maynard Dixon wrote, "Many times I wanted to write you, but struggle for health takes a lot out of me. Big news is we are going to quit Calif. & build us a log house in Utah, far from any large town. Mormons are simple honest farming people. We like them. Beautiful country, but cold in winter. Don't know if we can make a living there, but take a gamblers chance." 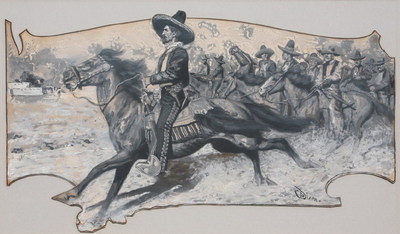 Given his love for Utah, it seems fitting that Provo's Brigham Young University has the largest museum collection of Maynard Dixon lifework paintings. Most of the Utah paintings are from 1933 through 1945. Mount Carmel was Maynard Dixon's summer retreat from the Arizona desert heat. Zion National Park was also a favorite area. The Utah paintings show the stark dichotomy of the state's terrain. While there are many landscapes of harsh, unforgiving land, Maynard Dixon also captured serene, mountain meadows. 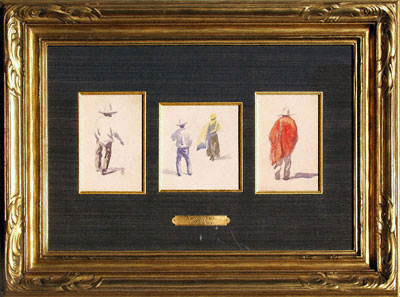 People: The people Maynard Dixon depicted in his paintings reflect the cultural mix of the American West of the early 20th century. Maynard Dixon was delighted to live among all the peoples of the region, and his portrayals of the Hispanic, Native American, and Anglo inhabitants are without comparison. Maynard Dixon also used the human form to allude to more ethereal subjects. Some of his most poignant and gripping works were the handful of Great Depression-era paintings done in 1934 and 1935. Maynard Dixon's wife, famed photographer Dorothea Lange, was devoted to chronicling the plight of the migrant workers and the San Francisco maritime worker's strike. Her involvement undoubtedly influenced Maynard Dixon's choice of this atypical subject matter. The images of expressionless men done in somber grays and blues show skillful use of light and shadow to accentuate the distress in the subjects he portrayed. 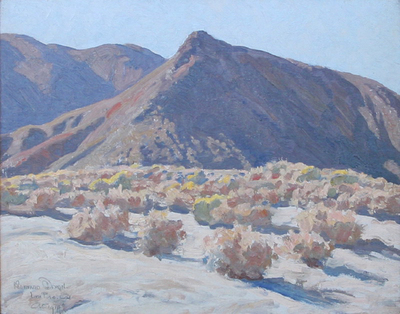 The Depression-era paintings are the least common in Maynard Dixon's body of work. The majority of these treasures are located in the Museum of Art collection at Brigham Young University. Maynard Dixon also portrayed people and their intimate interactions with the land around them. 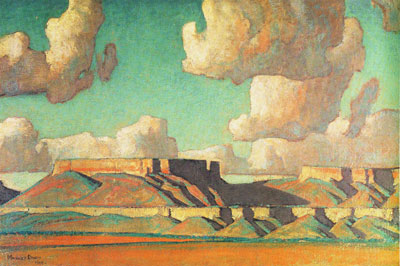 Maynard Dixon respected the Hopi and their culture, and spent many months living with them. Portraying the important association between man and animal, Maynard Dixon captured another essential facet of early 20th-century Western life. Indeed, the horse was a subject found throughout his career, from his earliest drawings and illustrations, to later works. The remote western landscapes and their early 20th-century inhabitants inspired Maynard Dixon. One only has to gaze upon these majestic paintings to understand Maynard Dixon's vision of the west. 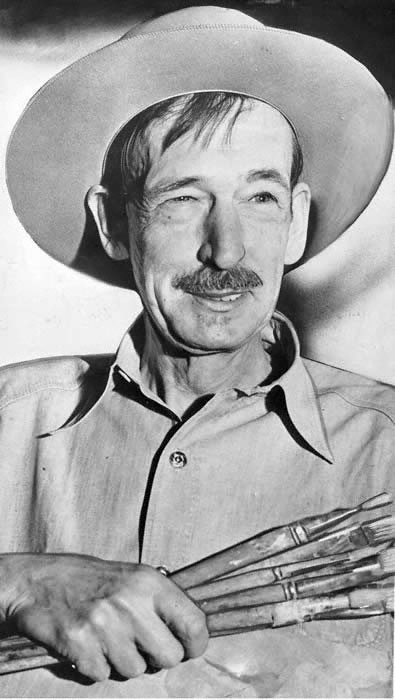