We buy and consign paintings! Highest prices paid for Louisa McElwain paintings, who we represented for over 20 years. 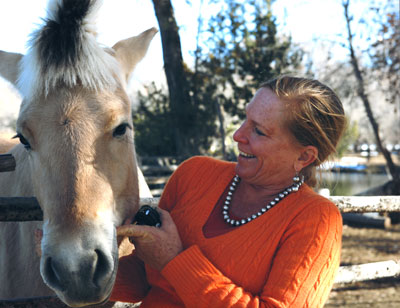 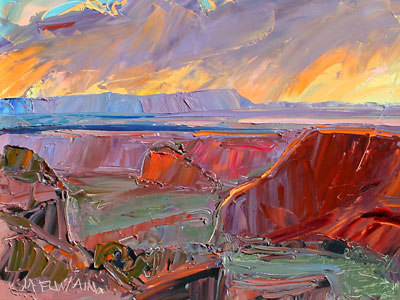 Louisa McElwain had been a resident of New Mexico since 1985. She was an abstract painter who paints nature, outdoors. She said, "During the process of painting large canvases outdoors, the interaction with Nature introduces insects, particles of plants and soil into the paint. To acknowledge the simultaneous levels of reality which surround me, I sometimes deliberately introduce elements into the paint like bits of broken beer bottle, stones, or charred wood. The subject of my works is paint, the motif is the image, the illusions, the beauty of landscape. I never want to forget that what I am looking at is paint on canvas." 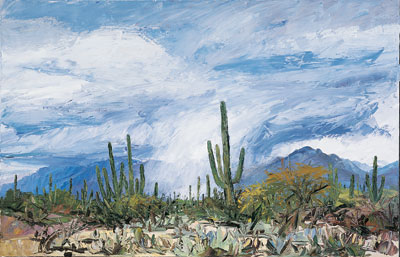 Louisa McElwain's work has also been featured in numerous publications, among them Time Magazine, Southwest Art magazine and the Denver Post.

"I paint outdoors in all sorts of conditions, open to the impulse of changing light, wind, heat, cold, insects and all forces of Nature that bring life into my paintings. A painting, for me, is the sum of innumerable commitments to an idea, made in a dance to the tempo of the evolving day. It is a kind of "captured" choreography, an entire ballet one can behold in a single gaze.

I am interested in exploring a way of describing my experience of places in Nature, without subordinating the marks and strokes of paint to the motif. Paint and the gestures that move it are made to the rhythms of Nature through Time, each with its own identity as paint, yet contributing to the meaning of the work as a whole. My chosen tool for applying paint to canvas is the knife, for two primary reasons: to curb my ability to describe objects, and to move paint with velocity, articulate delicacy, and sensuous impasto. To describe my experience, I rely on my understanding of how the interaction of color creates light, and my education in drawing to establish tonal weight and space.

My deepened relationship with a few beloved places continues to entice me to paint increasingly evanescent events of Nature, to take greater leaps into larger canvases, surrendering to the inquiry, and to paint with ever more trust and joy. The awe I feel for the magnificent and the mysterious manifestations of Creation is the compelling force in my work, and is what establishes my rapport with so many people who are deeply moved by this aspect of their lives here in the West. During the process of painting large canvases outdoors, the interaction with Nature introduces insects, particles of plants and soil into the paint. To acknowledge the simultaneous levels of reality around me, I sometimes deliberately introduce elements into the paint, like bits of broken beer bottle, bone, earth, stones, grass or charred wood. Anything stuck to the front of the canvas is part of the work.

It is my experience of “wonder” that I explore, rather than a position about visual reality, as a “realist” would. It is the question that interests me, not the answer. My commitment to artistic integrity precludes my affiliation with any association of artists. As I continue to develop my own voice, I strive to keep my work free from the influences of other schools, styles or movements. Out of my education and experience I have blended two distinct ideas, the respect for materials and gesture held by the action painters of American abstract expressionism and the expressive breadth and reverence for Nature of the romantic composer Johannes Brahms

I reject the presumption that the validity of contemporary art is commensurate with its ability to “challenge” the viewer, to provoke, repulse or offend, and question the motivation of artists who adhere to that school of thought. Rather, I strive to balance the beauty of the paint with the beauty of the motif, to create paintings that gratify, nourish and empower. I celebrate the embrace of the divine mysteries.” 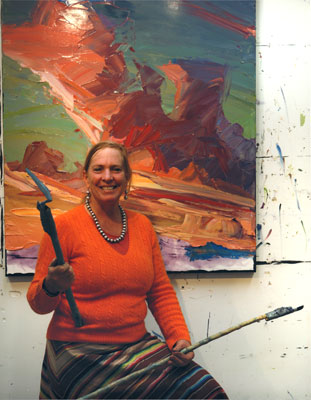 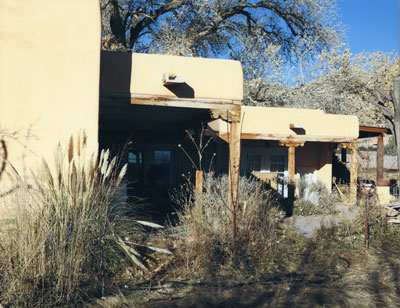 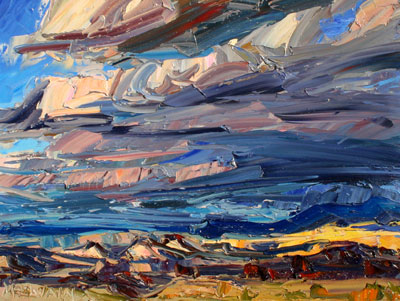