Louis Akin grew up in Portland, Oregon, the grandson of pioneers who had come to the West by way of the Oregon Trail. Akin studied art in New York with Merritt Chase and Frank Dumond before traveling to Arizona to paint the Hopi in 1903. The Hopi pieces were commercially successful and were reproduced as postcards and travel posters.

The appeal of Arizona had been its climate, which helped Akin to recover from tuberculosis, but the land grew on him so much, he spent most of the rest of his life there. He lived in Flagstaff, on the Hopi reservation in Oraibi and in the El Tovar Hotel on the south rim of the Grand Canyon while in Arizona, and was inducted into the Hopi's secret society and given the name "Mapli" upon finishing a series of paintings of the tribe. 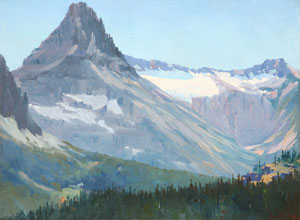 The pieces were well-received in New York, as well, as Akin's one-man show at Clausen Gallery on Fifth Avenue was a critical and economic success. However, upon his return to Arizona, Akin turned away from Indian subject matter in favor of what he thought was a more saleable genre, that of the romantic landscape. One of the first and certainly the best known of these pieces was "El Tovar Hotel, Grand Canyon," a much-reproduced painting of the El Tovar Hotel with Hopi and Mexican figures in the foreground. This piece found its way onto railroad posters, postcards and lithographs, and marks the peak of Akin's commercial success as an artist.

Several other of Akin's pieces were used in advertisements, as well, but debt and depression would mark the rest of his life. In 1907 he moved to Flagstaff, where he had a studio at Babbitt Bros. store, sleeping on the floor at night. He borrowed money from friends and began trying to paint in the style of Albert Bierstadt, detailed panoramic landscapes. He briefly and disastrously married and, aside from a trip to Glacier National Park and the Fraser River area of British Columbia, he was unable to find happiness in his life or work. He did receive a major commission, however: a series of paintings to decorate the Southwest Indian Room of the American Museum of Natural History in New York. After finishing twenty oil sketches for the project, Akin contracted pneumonia a few days before Christmas, however, and a few days after the New Year, he died, cutting short a promising career. Louis Akin was buried in the Flagstaff cemetery. 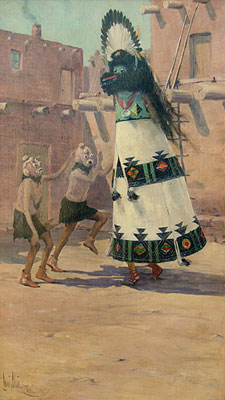