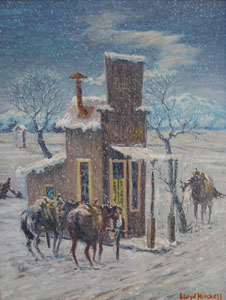 Lloyd Mitchell was known for his paintings of horses, riders, and western landscapes.

Mitchell was born in the Ozark Mountains of Arkansas, the son of a horse trainer.  At age sixteen he left home to work as a cowboy on ranches around the western plains.  In the early 1930s he went to California and found work in movie westerns.  After serving in the Navy during World War II, Mitchell settled in Temple City, California where he became a successful businessman.

Mitchell enjoyed sketching and painting from a young age, and in the late 1940s he enrolled at the Chouinard Institute studying under Henry Good and Will Foster.  He later studied with Sam Hyde Harris and painted with his friend George Ford Morris.  He was a member of the American Institute of Fine Arts and several western art societies.

Mitchell primarily painted Old West scenes, most of which included horses.  He is probably best known for his "Skinny Saloon" series of humorous paintings which were reproduced as prints and greeting cards by the Leanin' Tree Publishing Company.