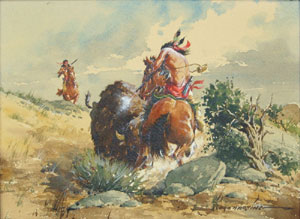 Lloyd Harting was an illustrator, animator, and watercolorist who specialized in scenes of the Old West.

Harting was born in Little Falls, Minnesota and enrolled in the College of Engineering at the University of Minnesota before deciding on a career in art.  He attended the Minneapolis School of Fine Arts, the Art Institute of Chicago, and the Grand Central School of Art in New York. 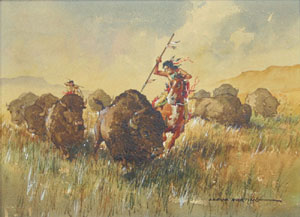 Harting created advertising and calendar illustrations for the printing giant, Brown & Bigelow, for thirty years.  He also painted movie advertisements and worked in movie production at 20th Century Fox and Walt Disney Studios for a total of about nine years.  He is credited as an art director for Disney's Bambi, released in 1942.  He was commissioned by the United States Navy to paint in the Far East, and in the early 1960s, the United States Air Force sent him to paint at various locations around the world.  Near the end of his life, Harting painted illustrations for two books on Spanish Colonial history in California.

Harting worked primarily in watercolor and had a detailed, realistic style that owes equally to Charlie Russell and to popular illustration of the 1930s.  His favorite subjects were action scenes of the Old West including Indians, cowboys, prospectors, railroads, and wagon trains.  He also painted wintry scenes of his native Midwest, and historical views of the Spanish missions of California.