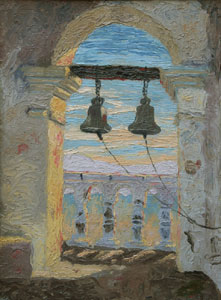 Lillian Wilhelm Smith was an illustrator and easel painter known for her Arizona landscapes and portraits.

Born to a prosperous family in New York City, Wilhelm Smith studied at the National Academy of Design, the Art Students League, Columbia University, and the Leonia School of Art in New Jersey.

In 1907, Wilhelm Smith took in Buffalo Bill's Wild West Show at Madison Square Gardens, sparking a lifelong fascination with the West.  She was particularly impressed with the Native American performers and painted more than 100 portraits of the show's Sioux and Arapaho participants and their children. 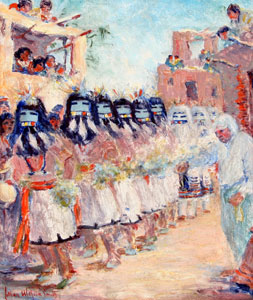 In 1913 the western author, Zane Grey, who was married to Wilhelm Smith's Cousin, asked her to accompany him on a 400-mile pack trip in Arizona to paint illustrations for his sequel to Riders of the Purple Sage.  The young woman of eastern privilege loved the rugged adventure and returned frequently to Arizona, often scouting with Grey for book illustrations or ideas for movie sets.

On one of their scouting trips, Wilhelm Smith met a cowboy named Jesse Smith who served as the model for some of Grey's fictional characters.  The two were married in 1924, and lived in Arizona for the rest of their lives.  The couple ran a trading post and guest ranch in Tuba City, Arizona for a time and also lived in the Phoenix area.  In the late 1920s and 1930s, Wilhelm Smith designed china patterns based on Hopi and Navajo motifs.  From 1930 to 1935, she spent winters as artist in residence at the gallery at the Phoenix Biltmore Hotel.  In 1937 the Smiths sold their Scottsdale home and moved to Sedona where they operated another guest ranch.  In 1950 they moved to Cochise County and finally settled in Prescott.

Throughout her life in Arizona, Wilhelm Smith traveled extensively throughout Arizona on painting trips.  Her favored subjects were landscapes and Indian portraits rendered in an impressionist style, using bright colors. She exhibited her paintings primarily in Arizona.  In addition to illustrating several of Zane Grey's novels including The Rainbow Trail (1915), The Border Legion (1919), and Tales of Fishing Virgin Seas (1925), Wilhelm Smith painted illustrations for other books including Canyon Shadows (1931) and Wonders of the West (1936).