Leonard Reedy was born in Chicago in 1899. As a child he developed an aptitude for drawing, attempting to reproduce the style and subject matter of Frederic Remington, the dominant western illustrator of the first half of the twentieth century. Leonard Reedy filled the margins of his school books with drawings and, when he was old enough, enrolled in the Chicago Institute and Academy of Fine Arts. 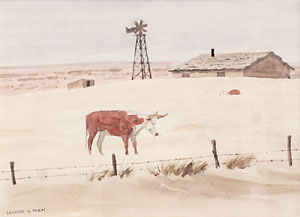 Leonard Reedy lived in a variety of locales in the forests of the Midwest, the mountains of the West and the desert of the Southwest. Leonard Reedy traveled with Indian tribes and lived in timber camps, working long hours of hard manual labor, and depicted the sites of this kind of lifestyle. Known as "Chicago's Cowboy Painter," most of Leonard Reedy's public pieces reside in restaurants in the Chicagoland area, with which he traded for food. 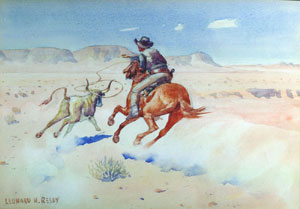