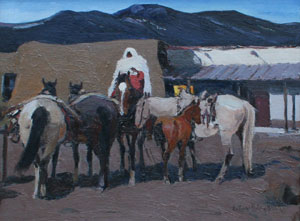 LaVerne Nelson Black was born in Viola, Wisconsin, in the Kickapoo River Valley. His interest in art came early, when he mixed pigments with local earth and plants in order to draw. When his family moved from Viola to Chicago, Black's access to art supplies improved; studying at the Chicago Academy of Art, Black distinguished himself among his classmates and won a scholarship after his first year. At the Academy, Black studied painting, illustration and sculpting, all of which he would go on to use in his long and varied career. After graduation, he began working in newspaper illustration, a professional that found him living in Chicago, New York and Minneapolis. During the summers, he would steal away to the West to paint and sketch Indian subjects.

The focal point of his western travels, of course, was Taos, New Mexico, the capital of western painting and the base of operations for an entire generation of famous painters and artists. He also produced several bronzes, which he successfully placed in Tiffany's, the first such pieces to appear in the store since Frederic Remington's. By 1925, Black had become so ill he could no longer tolerate the winters in the east, and moved with his family to Taos to establish permanent residency. In Taos, he was able to concentrate on Indian subjects, bringing a brushy, jittery style to his depictions.

His health, continued to decline, unfortunately, and he soon was forced to relocate once again, this time to Phoenix, AZ. In Phoenix, he joined up with Ernest Blumenschein to paint murals for the Post Office with a WPA grant. The murals followed the state of Arizona from its discovery by white settlers to the industrialization of the 1920s and 30s. Shortly after they had finished them, however, Black became sick. Within several weeks he was dead, presumably of lead poisoning from the paint. Tragically, his reputation continued to improve after his death and, within a decade of his passing, had become much more famous than he had ever been during his life. Today, his pieces are rare and quite in demand, and can command significant prices.