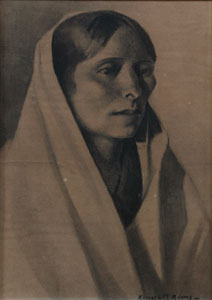 Kenneth Miller Adams was born in Topeka, Kansas in 1897. Studying with G.M. Stone in Topeka, Adams went on to study at the Art Institute of Chicago and the Art Students League in New York before traveling to Italy and France for further instruction. He summered in Woodstock, NY with Andrew Dasburg, painting the landscape and developing his skills as a modernist. 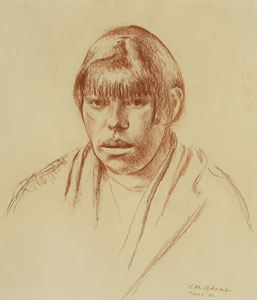 In 1924 Adams moved to Taos to be with Dasburg and Walter Ufer. He would be the last and youngest member of the Taos Society of Artists, and perhaps the most dedicated modernist of them all. He was also one of the most emotionally connected to the Taos Indians, teaching at the University of New Mexico, Taos. In 1938 He moved to Albuquerque during the winters, where he worked on nudes, portraits and still life, returning to Taos in the summer to focus on Indian subjects. He taught at the University of New Mexico in Albuquerque, as well, eventually earning a tenured professorship and a membership to the National Academy of Design. He died in 1966. 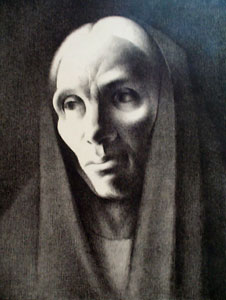