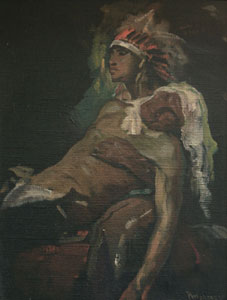 Born in Detroit, Michigan in 1858, the son of a German goldsmith, Julius Rolshoven's drawing ability was encouraged by his father to improve his engraving skills.  In 1877 he started his studies with Ernst Plassman at the Cooper Union Academy in New York after being denied admission to the National Academy.  In 1878 he left for Germany where he studied under Hugo Crola at the Academie of Dusseldorf and the Royal Academy of Munich.  In 1882 he studied at the Academie Julian in Paris and then stayed there teaching for the next six years. 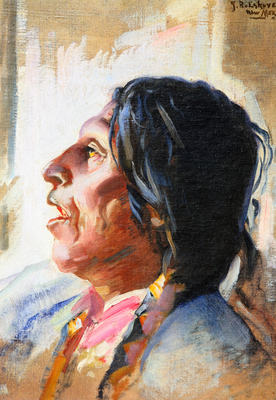 When WWI started Julius returned to the US.  He married Harriette Blazo in 1914 and honeymooned in New Mexico.  In 1916 they moved to Santa Fe.  He became an associate member of the Taos Society of Artists 1917 and an active member in 1918.  Because he was absent from the historic photograph of the Society members, he is not as well known as the other founding members.  But his artistic ability was known to be equal or better than the other members.  In fact he had been invited to join the Taos group before Victor Higgins, Walter Ufer and Ernest Hennings.  This was the premier art colony of New Mexico and the first art colony of importance in the American West.  The Society was formed to help the members market their paintings, especially in the East.  The Santa Fe Railroad was instrumental in the success of these artists also because they purchased paintings that were used to market railroad travel to the West. 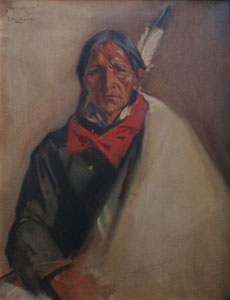 Julius established a studio in Santa Fe at the Palace of the Governors and often painted portraits of the local pueblo Indians who came to the plaza.  He painted with the traditional techniques he had learned in Europe, but often painted outdoors or under a white tent to shield his work from the harsh light.  He was known for his skilful use of pastels and the bold brushwork of his oil painting.

For the next eleven years the couple divided their time between Santa Fe and Florence, Italy.  His Italian house was the former home of Mona Lisa who modeled for Leonardo da Vinci.  Rolshoven died in 1930 while on an ocean voyage back to the US to visit his mother for Christmas.  In fact he died only two hours before his 92-year-old mother.  Compared with the other members of the Taos Society, Julius' work is now scarce and difficult to find.  His art is in collections at the Detroit Institute of Arts, the University of New Mexico, the Smithsonian Institution, the El Paso Museum of Art and several others.