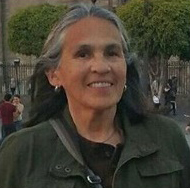 Julia Arriola, an artist with eclectic ideas, draws on history for conceptual renderings that address past, present and future with an indigenous flair. Trained as a sculptor, she likes to look at all sides of an image whether 2d or 3d. Currently her works are drawings using colored pencils and ink on ledger paper that dates from 1859.

Born in Tucson, Arizona, and daughter of a career master sergeant, she has lived in other states but always returned to her beloved city. One of the favorite subjects in early schooling was art period and history in high school. “As a child she was always drawing and trying to make things,” her mother once said of her. During the teenage and early adult years the thoughts of art went away and did not fully return until the early 80s. After jobs in factories, a three year tour in the Navy, and more factory jobs she decided to go back to school, making her a late comer into the world of higher education and art. After graduating with a Masters in Fine Art the race was on to 'make it' in the art world, or at least try to make a living on ones art. Easier said than done, and definitely not the 9 to 5 job that the factories offered, she was recommended for a curatorial position at the Arizona Historical Society, a museum where she had been hired as a work study student during undergrad and graduate school.

Always grateful to the Arizona Historical Society for not only the position but throughout the career there were many creative outlets that the museum provided to bring art into the interpretation of history exhibits. After recent retirement, Arriola is now able to spend 6 to 7 hours a day in her studio once again becoming a full time artist.

Although art came back at a later time in life, Arriola would not change a thing, as all experiences led her through a rich life with amazing outcomes that now are manifested through ledger drawings, sculpture. 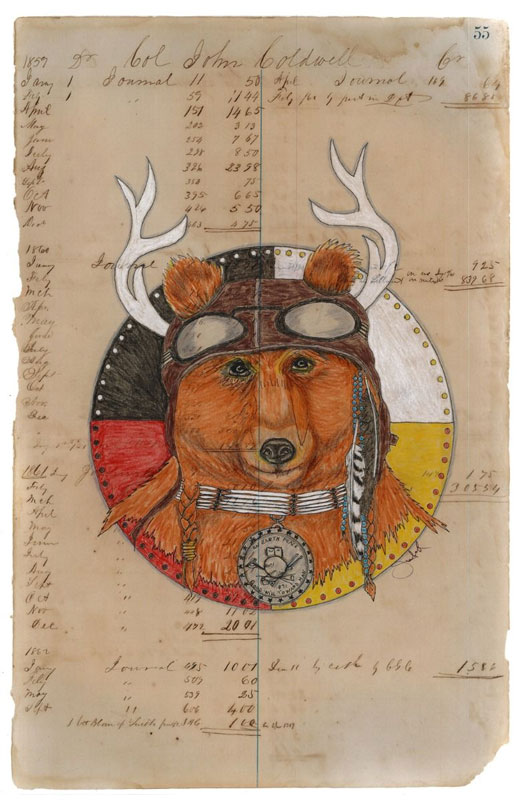 Julia says about her art and inspiration:

"The ledger drawings began a little over a year ago starting with my love for Steampunk. Love the design, fashion, and technology that came from that great but horrible time period, especially for NA, the 19th century. These drawings suggest how objects/concepts from the 19th century were not only forced on Native Americans, but was also embraced. Different tribes, traditions, and ceremonies are included because all were impacted by the overwhelming force of Manifest Destiny. Steampunk fashion is a subgenre of the steampunk movement in science fiction. It is a mixture of the Victorian era's romantic view of science in literature and elements from the Industrial Revolution in Europe during the 1800s."