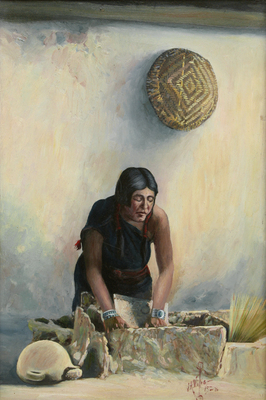 J. R. Willis was born November 24th, 1876 in Goloid Community, Screven County, Georgia near Sylvania. His artistic career began as a political cartoonist during the Spanish American War. He also made fashion drawings for the Atlanta Constitution newspaper. Around 1908 he went to New York and studied painting with Robert Henri. Next he went to Hollywood where he painted backdrops for Universal Studios. He also spent ten years in vaudeville as a "chalk talk" artist.

In 1917 Willis was headed for New York to look for syndication for his cartoons, when he stopped in Arizona to sketch Hopis. He decided to stay in the Southwest and set up a photography studio in Gallup, New Mexico. As he toured many of the pueblos to take photos, he began doing paintings from his photos.

He frequently went to Miami, Florida in the winters to visit family. From there he made trips to Cuba, Haiti and the Dominican Republic and painted many landscapes. He was well known for his photography. But he was best known by far for his portraits of the American Indians from New Mexico and Arizona. He was also referred to as the "Aspen King" for his lovely paintings of the aspens turning golden in the fall.

In 1931 he moved to Old Town in Albuquerque, New Mexico where he built a house and studio. Willis was quite a character, wearing a cape and smoking Pall Mall cigarettes in an ivory holder. He is remembered by the old timers in Albuquerque for dressing with a flair for the dramatic and his love of discussing his paintings. 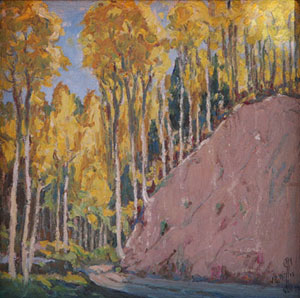 Willis continued to paint up until the time of his death. His paintings are in the Albuquerque Museum, a Japanese museum in Imabari, Shikoku and a museum in Valledupar, Cesar, Colombia, South America.