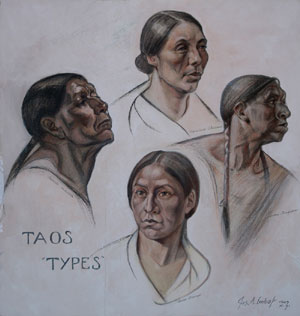 Joseph Imhoff was born in Brooklyn, New York in 1871. His first exposure to art was at age six when his godfather gifted him with a box of watercolors. Upon graduation, his father refused him further education unless he became a priest. Rejecting his father's wishes, he started teaching himself lithography and was hired by Currier & Ives. He eventually earned enough money from this job to buy a bookstore. In 1991 he eventually quit his job and sold the bookstore to pursue a formal art education in Europe. Traveling and painting for four years in Paris, Brussels, Antwerp and Munich he apprenticed with several artists. 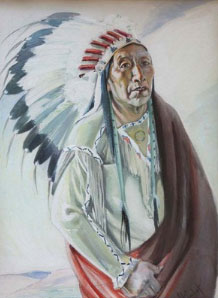 But perhaps the most important experience he had in Europe was to meet Buffalo Bill Cody on board the ship and join him in Antwerp to spend time sketching and painting various members of the "Wild West Show". This experience set in place a style of painting for the rest of his life which focused on ethnographic and anthropological data rather than artistic expression. He documented the religious ceremonies of Pueblo Indians in large, rather simplified oils. He also learned new techniques for lithography which had a long-term influence on his artwork. 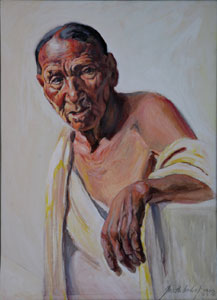 When he returned to New York, he rented a studio in Flatbush and began to study the Iroquois Indians in New York and Canada. He spent the next ten years painting and improving his lithography, photography and color printing innovations - which financed his early painting career. He also freelanced for Allen and Ginter, painting his Indian Head Series for insertion on cards in boxes of cigarettes. 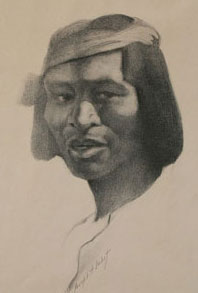 In 1897 Joseph married Sarah Ann Elizabeth Russell, and they traveled to Europe several times until 1905 when they visited the Southwest for the first time to record the ceremonies of the Pueblo Indians. Joseph and built a studio in Albuquerque in 1906, and spent much time in the next few years traveling around the region. 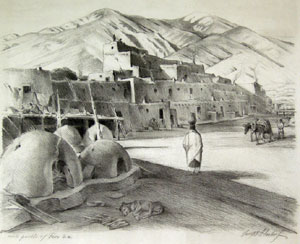 In 1929 Joseph and Sarah moved to Taos permanently and built their new home facing the sacred mountain behind the Taos Pueblo. Their neighbor for some twenty years, Mabel Dodge Lujan, was known to refer to him as, "The Grand Old Man of the Pueblos". He would ask native models to live in his home for a time before he painted them. He felt he needed to know the person's soul that the eyes revealed in order to paint an accurate likeness. He collected many Indian artifacts and also had the first lithography press in Taos, which he used to make ethnographic prints and teach his techniques of recording the region's history. His series of paintings called Kivas and Corn which he gifted to the University of New Mexico was his most famous work. The Koshare Indian Museum also houses one of the largest collections of his paintings.

Joseph Imhof died in 1955 leaving an important legacy of the American Southwest. His wife Sarah in later years said of her husband, "...a gentle, dignified man who loathed the publicity and the limelight that other artists seemed to seek; he avoided publicity at all times..."