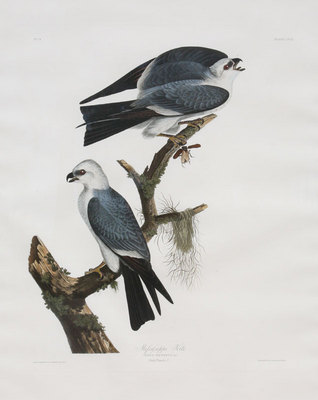 John James Audubon was the son of a French sea captain and a chambermaid who died a few months after his birth on April 26, 1785 in Les Cayes, Saint-Domingue, West Indies (now Haiti).  His father took him to Nantes, France with a step sister and legally adopted both in 1794.  Audobon's wife raised the children as if they were her own and allowed them to spend many happy hours in nature exploring.  Audubon studied art in Paris for six months at the studio of Jacques Louis David.  At the age of eleven John was enrolled in the Naval Academy at Rochefort-sue-Mer where he stayed for a few years but was eventually forced to leave because of his poor academic standing.  He was raised with all the privileges and economic advantages of a gentleman, but seemed only interested in fishing, hunting and collecting bird nests and eggs.  At fifteen he was baptized Jean Jacques Fougere Audubon, a name he would later Americanize to John James Audubon.

In 1803, fearing his son's conscription into Napoleon Bonaparte's army, John's father sent him to manage the family's farm at Mill Grove outside of Philadelphia, Pennsylvania.  He had hoped his son would operate the lead mining and smelting enterprise he had started on the farm.  But Audubon was not interested in managing the family farm and instead wandered the landscape hunting and collecting bird specimens.  He began to thread wires through the birds he had shot to pose them so he would get lifelike drawings of the bird as if it was in the wild.  It was also during this time he began his courtship with 17-year-old Lucy Green Bakewell who lived on a nearby farm.  Their lifelong exchange of correspondence begins during this five-year courtship.  Her unwavering support was one of the most important elements of John's success. 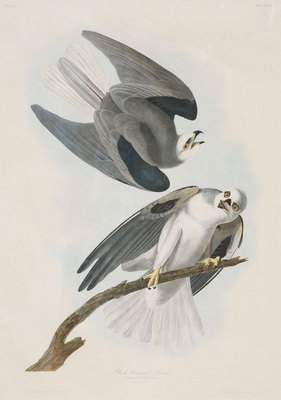 From 1805 on Audubon tried many different business opportunities in very many cities around the Western US, all of them ending in failure.  He married Lucy in 1808 and she supported the family through teaching and taking governess positions in wealthy homes.  John was jailed briefly for bankruptcy in 1819.  During all of his disastrous business dealings he continued to spend most of his time hunting birds and drawing detailed images of each one.  He was inspired by meeting Scottish ornithologist, Alexander Wilson and seeing his drawings.  This began a long and arduous journey to find a publisher for the drawings of life-sized portraits of 1,065 individual birds which he titled "The Birds of America."   Most of his work was done in watercolor, but starting in about 1822 learned how to paint with oils.  He mostly did portrait oil painting to earn some money and to paint for his private collection and continued with watercolor for his birds.

In 1824 he had an exhibition of his bird drawings at the Philadelphia Academy of Natural Sciences, but still failed to find a publisher.  The same year he was elected to the membership of The Lyceum of Natural History.  Two of his papers were published in annals.  In 1826 Audubon's fortune changed dramatically.  He left his wife and two boys in Louisiana and left for England aboard a schooner loaded with cotton.  He approached Lord William Rathbone with a letter of introduction and was granted an exhibition of his drawings.  He also presented the work in Scotland and to Sir Walter Scott in London.  He was very well received and became in instant celebrity.  He met master engraver and printer William H. Lizars in Edinburgh and made arrangements for him to make the plates for engraving. The plates are printed on Double Elephant Whatman paper.  On November 28, 1826 the first proof plate, The Wild Turkey Cock is printed. 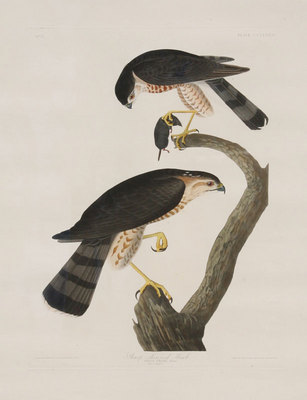 Audubon is made an Honorary Member of the Wernerian Society, a Fellow of the Royal Society of Edinburgh and a Fellow of the Linnean Society.  The eminent Paris scientist, Georges Cuvier, declared the paintings to be the "greatest monument ever erected by art to nature."

King George IV was a fan of "The American Woodsman."  In 1829 Audubon was elected a Fellow of the Royal Society of London.  This same year he returned to America to sell subscriptions to finance the publication and to gather more specimens to include in The Birds of America.  When the Scottish printers went on strike, Robert Havell, Jr. a London engraver, stepped in to engrave the hand-colored copper plates for the remaining drawings and paintings which started an eleven-year collaboration between the two artists.  The finished product was a four-volume set weighing fifty pounds.  It sold for $1,000, and less than 200 of the bound copies were printed.  The accompanying text named Ornithological Biography was prepared in collaboration with William MacGillivray, a Scottish naturalist.  The finished Birds of America was 435 life-sized elephant folio engravings, of which about 100 sets were sold in England and about seventy-five in America.  He started a companion work about animals with his friend John Bachman called The Viviparous Quadrupeds of North America.  This was eventually finished and published by his two sons after his death. 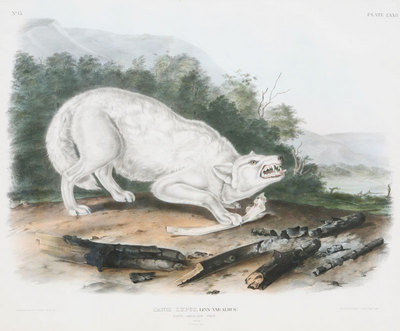 Audubon purchased "Minnie's Land" in 1842.  It was an estate on the Hudson River named after his wife who's pet name was Minnie.  This land is now 157th St. in Manhattan.  He borrows Captain William Clark's original copy of his 1803 Expedition Journal of the Corps of Discovery to make an expedition to Missouri to collect more bird specimens.  Audubon then used material from this trip to publish a smaller octavo edition by lithographer J.T. Bowen in 1843 which gave him more exposure to the public.  In 1844 the seventh and final volume of the Royal Octavo Birds of America was completed.   The next few years showed a dramatic decrease in Audubon's health and in 1847 he suffered a stroke which rendered him unable to draw and paint.  He died in January of 1851 at Minnie's Land.

In the following years, Lucy desperately tried to survive by selling her personal copy of Birds of America as well as selling the original copper plates to Phelps Dodge Corporation to be melted into scrap metal.  Approximately 80 of the original 435 copper plates were saved from meltdown.  Interest in Audubon's work continues to escalate.  In 2004 a single print of the American Flamingo brought $197,000 at auction.  Both the Audubon and the Smithsonian Magazines published cover stories on him in 2004.  In 2005 the New York Historical Society exhibited fifty of the original watercolors in their New York gallery.  The Buffalo Bill Museum in Cody, Wyoming held an exhibition in 2001 of prints from the folio quadrupeds. 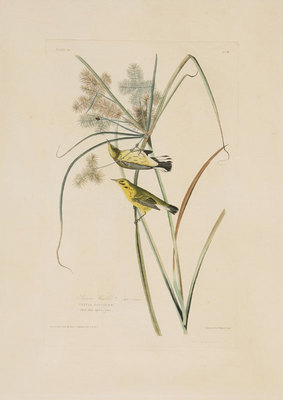 The Audubon Society was incorporated in 1905 and named in his honor by George Bird Grinnell who had been tutored by Lucy Audubon.  He wanted to inspire people to protect birds and their habitats.  Included in the vast number of museum collections of Audubon's work is the Museum of Fine Arts, Boston; the Louvre Museum, Paris; Fine Arts Museum of San Francisco; the Detroit Institue of Arts; John James Audubon at the National Gallery of Art, Washington D.C.; North Carolina Museum of Art, Raleigh and the Arizona State University Art Museum, Tucson.