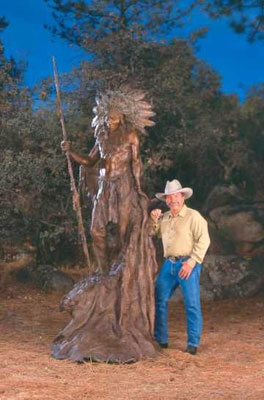 John Coleman's favorite type of art is the kind that tells a story that is deeper than what you see on the surface. His love of history overflows into his art. John Coleman's greatest influences come from the classical masters. In the tradition of Bernini and Canova, John Coleman believes that understanding mythology and its basis for civilization was the anchor for spirituality being a true advocate of this philosophy. he uses mythology as the blueprint for his work. Traditions steeped in folklore and mythic tales are the impetus for his sculpture. I believe art is about putting a physical face on a spiritual idea. My love for American mythology and Native traditions give me a strong sense of kinship to others who, like me, are dedicated to preserving history."

Born in Southern California in 1949 John Coleman began his early studies at the Art Center for Design in Los Angeles. Since then he has continued his education by studying with many of the top sculptors, and today shares his passion for sculpting by teaching. John Coleman now teaches at the Scottsdale Artists School and the Loveland Academy.

John Coleman has been a member of the prestigious Cowboy Artists of American since 2001 and the National Sculpture Society since 1999. Coleman resides in Prescott. Arizona with his wife Sue.

"I am fascinated how music can convey a mood without lyrics and have often thought sculpture lends itself to that idea. I have always loved history and mythology and feel they are the lyrics to my sculpture; the musical interpretation that engages the emotions. Just as music has a beginning, a middle and an end, so does sculpture.

I like to tell stories in my work using metaphors that help explain who we are and from where we came. Creating an object means little to me unless I can portray an underlying emotion or analogy. Each piece tells a story in the three dimensional, a visual mythology written by my hands and spiritual imagination, somehow linking us to the past and bringing us to a greater understanding of our ancestors." 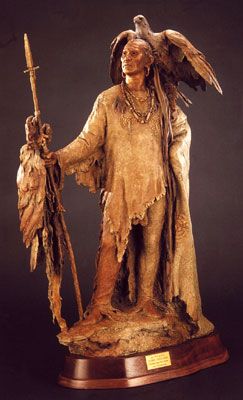 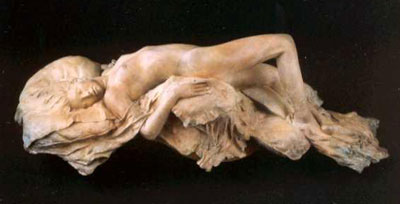